The company had a strong quarter to cap off an impressive year.

Even the Noid could not hold Domino's (DPZ 0.34%) down in February.

What: While the pizza-ruining mascot has actually been out of commission since 1989 when the character was dropped after an unfortunate kidnapping scandal, the chain has persevered in a crowded space. February turned out to be an especially solid month for the company which saw its shares rocket upward after it reported results on Feb. 25. 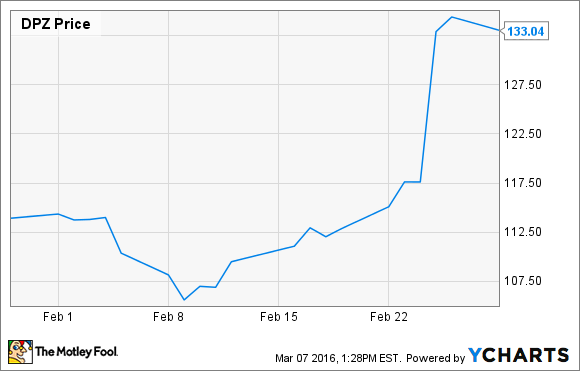 Management also pointed out that the numbers would have been stronger, but diluted EPS for both the fourth quarter and fiscal year was negatively affected by expenses related to the company's recapitalization that finished in Q4. On the plus side the quarter did benefit from having an extra week over the previous year. Still, even with the positive and negative adjustments fourth quarter diluted EPS was $1.15, up 26.4% over the prior-year quarter; full year as-adjusted diluted EPS was $3.45, up 19.% over the prior year.

So what: For a brand that has been around as long as Domino's these are massive growth numbers both for the quarter and the year. The company has clearly proven that despite heavy competition from other low-price pizza chains and pressure from fast-casual pizza offerings on the higher end, that it still has an appealing offer for consumers.

Most encouraging might be the company's continued international success where it has posted an astounding 88 consecutive quarters of positive same store sales growth, according to the earnings release.

"Our network of strong franchisees has become even more profitable during these years of continued positive same store sales growth," said J. Patrick Doyle, Domino's President and Chief Executive Officer. "Great store economics around the world have led to accelerated unit growth. It's a positive cycle and the momentum continued through 2015."

And, going forward there is no reason to believe momentum will not continue into 2016. Domino's has shown that it can avoid the problems most fast food companies dealt with last year. It also proved that higher-end fast casual competitors won't damage its business the way they did to other quick-serve chains.