The content production studio is drumming up substitutes for "Hunger Games," "Mad Men," and "Nurse Jackie" all at once. That's not an easy task.

What: Shares of Lions Gate Entertainment (LGF-A 2.91%) fell 19.3% in February 2015, according to data from S&P Capital IQ. The film and TV content producer published disappointing third-quarter results on February 4, and the stock plunged as much as 30% the next day. Lions Gate climbed back a bit from that severe haircut, but the damage was too great to erase entirely.

So what: The fourth and final installment of the Hunger Games saga failed to live up to expectations, with global box office sales more than $100 million below the studio's own forecasts. When asked to explain this shortfall, CEO Jon Feltheimer pointed to a soft Chinese economy and European consumers skipping the Mockingjay Part 2 premiere because of the terrorist shootings in Paris earlier that week.

Whatever the reasons, Lions Gate's revenues decreased 11% year over year while analysts were looking for growth.

Now what: The company may make up for some of the Hunger Games weakness in upcoming quarters, assuming that at least some of the consumers who skipped seeing that film in theaters might pick up a Blu-ray or pay-per-view ticket instead. But some of the damage will be permanent.

Looking ahead, Lions Gate is redoubling its efforts on high-quality TV content. That's only to be expected now that hit shows Mad Men and Nurse Jackie passed on to the great syndication gig in the sky after their 2015 seasons. This year, Lions Gate is sprinkling new series over four of the leading cable networks. But that effort will not pay off quickly, and analysts have grown restless with Lions Gate's thin theatrical production slate.

Meanwhile, Lions Gate share prices may have fallen, but earnings are plunging even faster. If you were expecting the stock to look affordable at these low prices, you should know that trailing P/E ratios have more than doubled over the last six months. Now, the stock sells for 60 times trailing earnings. Meanwhile, the company stands knee-deep in debt with paper-thin cash reserves. That only works as long as cash flows stay strong. Unfortunately, that's not always the case: 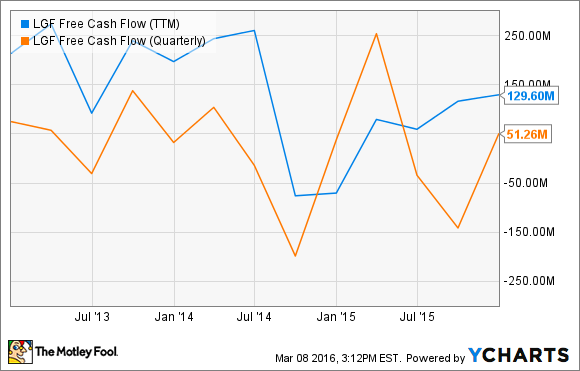 As much as I appreciate Lions Gate for its top-notch TV productions, this is a risky business and an equally speculative stock. Lions Gate needs either a hefty turnaround or a buyout-themed exit strategy. Just be prepared to take a big hit if neither of these positive outcomes actually plays out.

Anders Bylund has no position in any stocks mentioned. The Motley Fool owns shares of and recommends Lions Gate Entertainment.