Ross Stores has a lot going for it, but its larger rival remains the better long-term investment choice.

In today's turbulent retail environment, off-price leaders like TJX (TJX -0.68%) and Ross Stores (ROST -1.33%) have offered some of the few bright spots among brick-and-mortar retailers. Both stocks have more than tripled in the past five years and are trading near all-time highs. 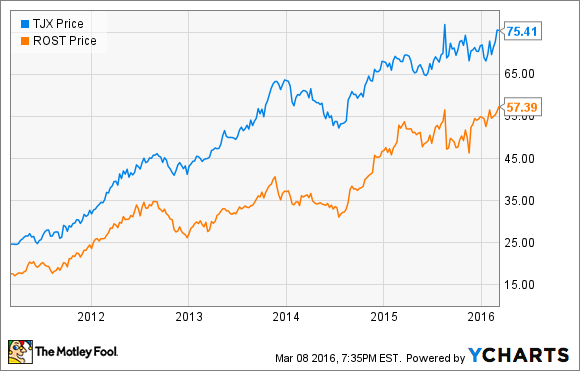 The off-price segment has steadily pulled market share away from traditional retailers in recent years. It also seems quite resilient in the face of rising e-commerce competition. As a result, both TJX and Ross Stores shares are likely to perform well in the coming years. However, between the two companies, TJX is the better choice.

The case for Ross Stores
Ross Stores is the smaller company with revenue of $11.9 billion last year, compared to $30.9 billion for TJX. It still has ample growth opportunities within the U.S., particularly in the Midwest and Northeast regions.

Ross Stores has a higher profit margin than TJX

The company also earns higher margins than TJX, despite its smaller size. In the most recent fiscal year, Ross Stores enjoyed an operating margin of 13.6%, up slightly from 13.5% in the prior year. By contrast, TJX's operating margin declined to 12% from 12.4% a year earlier.

Ross Stores only operates in the U.S., which insulates it from currency fluctuations, for the most part. By contrast, TJX generates nearly a quarter of its revenue abroad. The decline of key foreign currencies like the Canadian dollar, euro, and pound against the U.S. dollar has hurt TJX's revenue and earnings growth.

Indeed, due in part to the strong U.S. dollar -- as well as the cost of boosting wages -- TJX expects its pre-tax margin to decline by about 0.8 percentage points this year.

This is probably a conservative estimate, but it implies TJX will face at least some margin deterioration. As a result, Ross Stores will improve its margin advantage in 2016, since it expects a relatively flat margin performance.

The benefits of international exposure
While TJX's international footprint is weighing on sales and earnings growth right now, foreign markets represent a huge long-term growth opportunity for the company. TJX sees the potential to roughly double its store base in Europe and Australia in the long-term. This doesn't even include the possibility that it will enter new markets within Europe.

Of course, Ross could eventually opt for an international expansion of its own, but retailers frequently fail when they attempt to expand beyond their home markets. TJX's international success is the exception, not the rule. Even if Ross Stores were to successfully expand beyond the U.S., it would likely require a huge investment and a long period of subpar profitability.

TJX's big margin opportunity
Furthermore, while TJX's operating margin currently lags that of Ross Stores, it may be able to close (or at least narrow) the profitability gap over time. In fact, much of TJX's margin deficit comes from its younger, fast-growing international segment.

The relatively mature Marmaxx business posted a 14.3% margin last year. Including its share of corporate overhead costs, the Marmaxx operating margin has been in the 13% to 13.5% range in recent years: roughly in line with Ross Stores.

TJX's domestic operations are more profitable than its international business.

At the other end of the spectrum, the international segment posted a 7.5% segment margin last year, which is expected to decline to less than 6% in 2016 due to foreign currency pressure.

However, TJX has demonstrated that as its newer business segments mature, they can reach the same level of profitability as the Marmaxx segment. For example, the HomeGoods business in the U.S. has grown rapidly in recent years. Meanwhile, its segment margin reached 14% in TJX's latest fiscal year, up from 12.2% three years ago.

TJX's international operations were also posting steady margin expansion until the dollar began its sharp rise in late 2014. As the dollar stabilizes and TJX gains more scale in Europe and Australia, the international segment should resume its upward trend in profitability. This represents a critical source of long-term earnings growth for TJX.

TJX comes out ahead
Ross Stores and TJX trade at similar earnings multiples. Based on its large domestic growth opportunities, higher profit margin, and lack of exposure to weak international markets, Ross Stores may seem like the better choice for investors.

However, for TJX, weaknesses today may turn out to be sources of strength in the long run. Its international footprint will allow it to keep growing for many years to come, despite its massive size. Meanwhile, the maturation of its international business should also drive long-term margin expansion for the company.