Please ensure Javascript is enabled for purposes of website accessibility
Log In Help Join The Motley Fool
Free Article Join Over 1 Million Premium Members And Get More In-Depth Stock Guidance and Research
By Evan Niu, CFA - Mar 9, 2016 at 9:25AM

The tech titan is rumored to have a 5.8-inch AMOLED iPhone in the works -- that's even larger than the iPhone 6s Plus. 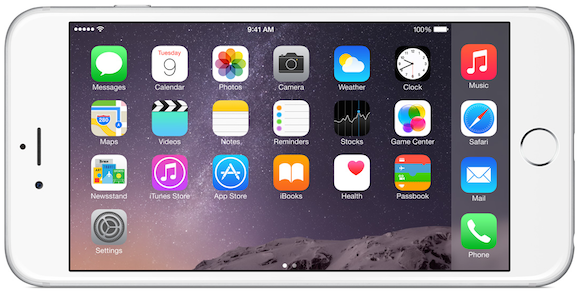 When Apple (AAPL 2.45%) finally made the move to larger displays with the iPhone 6 and 6 Plus in 2014, the marketing tag line was "Bigger than bigger." In characteristic Apple fashion, the implication was that the iPhone's jump to a bigger form factor was more significant than just a spec change. The expected move did do wonders for unit sales, though.

Apple posted a massive jump in iPhone units in Q4 2014, showing that there was considerable pent-up demand for a larger iPhone. 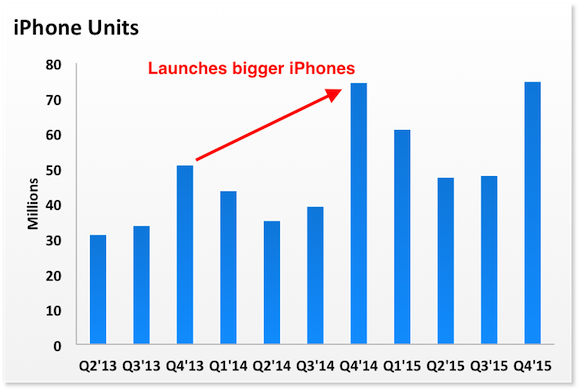 Furthermore, CEO Tim Cook shared some relevant data on the last earnings conference call, saying that 60% of customers who had an iPhone prior to the iPhone 6 and 6 Plus still had not upgraded yet to the larger displays. Assuming that a meaningful portion of those customers end up upgrading, there's still plenty of opportunity in the current 4.7-inch and 5.5-inch models.

But Apple might be about to go bigger again. Fellow Fool Ashraf Eassa obtained a pre-publication note from DIGITIMES suggesting that Apple is planning on including a massive 5.8-inch AMOLED display in the 2017 or 2018 iPhone. As usual, Ashraf offers his take on the technical aspects, but what other strategic implications are there for the Mac maker?

Rumor has it
Like all Apple rumors, particularly those that are farther in the future, there are more questions than answers. The most important is how a 5.8-inch AMOLED iPhone would be priced and positioned. There's already talk that the most expensive iPhone 7 Plus later this year might have a single-lens variant alongside a dual-lens camera.

If Apple does go that route and essentially charges a higher price for the dual-lens model, that would be a new precedent of offering different configurations (beyond storage) within a single iPhone model, which the company has never done before. We don't know what this possible dual-lens option could cost at this point, but rest assured it will be in line with Apple's broader margin profile. Note that the storage pricing structure that Apple implemented in 2014 has translated into impressive increases in ASPs. Apple is quite good at upselling commodity components since they're deeply integrated into the device.

AMOLED displays also cost more than the LCD panels that Apple currently uses, especially since Apple buys them from third-party suppliers while rivals like Samsung are vertically integrated. Samsung is expectedly in the running as a potential AMOLED panel supplier. That suggests that Apple would likely pass on those added costs to consumers in the form of an upsell.

Would Apple also keep its 5.5-inch iPhone around and sell a 5.8-inch model as well? That might justify the upsell more, since the customer also gets a larger display, but one of Apple's key strengths has always been product depth instead of product breadth. I'd hate for Apple's product portfolio to swell unnecessarily, since that only creates distractions with negligible market benefits.