Please ensure Javascript is enabled for purposes of website accessibility
Log In Help Join The Motley Fool
Free Article Join Over 1 Million Premium Members And Get More In-Depth Stock Guidance and Research
By Anders Bylund - Mar 10, 2016 at 9:20AM

Two tech giants enter, one leaves. Which one of these embattled veterans is the better buy today?

Oracle (ORCL 4.54%) and IBM (IBM 2.62%) have a lot in common. Both are tech giants with illustrious histories. Both are attempting to adapt their business models to the demands of big data, the Internet of Things, and a plethora of other game-changing technology trends. And both stocks have fallen by double-digit percentages over the last 52 weeks -- far below the S&P 500 benchmark's 3% drop.

For all their similarities, it's still very easy to tell these giants apart. So which one makes the better investment today? Let's go over the most important differences between IBM and Oracle to find a winner.

However, Oracle takes the lead if we shift to levered free cash flows instead. There, the database veteran's $10.5 billion sprints away from IBM's $8.6 billion.

High bottom-line earnings are nice, but cash is still king. Cash flows are far more difficult to manipulate than net earnings, and you don't see discounted cash flow calculations based on discounted GAAP earnings. Cash flows are the gold standard of profit measurements, and Oracle wins that duel by a landslide.

You'll also notice that IBM's cash flows are lower than the company's earnings, which turns out to be an inefficient tax accounting strategy. Oracle turns that ratio upside-down, which is a more tax-effective model.

Also, all of these profit figures are essentially in the same ballpark -- but IBM's annual sales are more than twice as large as Oracle's. Oracle is clearly more a more effective competitor and this fact should not be lost on anyone considering either of these names.

So this contest is not even close -- Oracle's profits are of much higher quality than IBM's nowadays.

Growth
But that could change if IBM is growing its profits faster than Oracle.

This is a closer race. Both companies have seen their bottom-line earnings dwindling recently, but IBM's cash flows are holding steady while Oracle's are plunging: 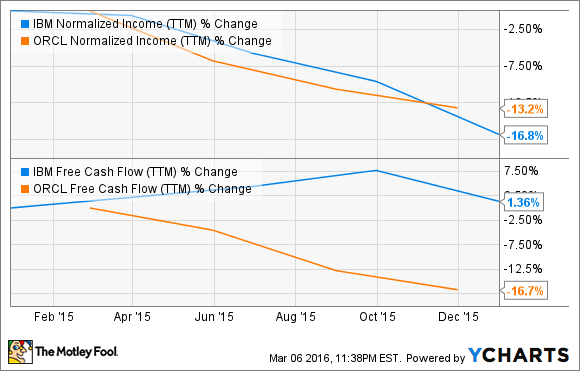 The picture changes a bit if we zoom out to a longer timescale. Oracle has generally beaten Big Blue's profit growth over the last five and 10 years. But the recent weakness in Oracle's cash flow trend is troubling, and the earnings comparison is a wash.

So I'll call the growth battle in IBM's favor. It's not a rousing victory, but a win nonetheless.

As you can see, IBM looks far more affordable when using common metrics like price to earnings or price to sales. But in terms of enterprise value to free cash flows, Oracle comes out further down the bargain pile.

Since that third metric deals with cash profits, and also accounts for Oracle's far larger cash reserves, it's arguably the most important of these valuation methods.

So, IBM will often win this comparison at a glance -- because many data sources simply don't report EV/FCF values at all. But if you take time to do that math, Oracle comes out on top again. It's another close race, but a clear win anyhow.

Winner: Oracle
With two wins against IBM's lone victory, Oracle takes the cake. But it's a tarnished crown, and both tech giants have a lot to prove right now.

The big caveat here is that IBM took the growth title which could point to future victories in other areas, too. But my Tarot cards are in for repairs today, so I can't tell for sure how all of that will work out over the next few years.

I will say that Oracle has a tough row to hoe. Its flagship relational database product is under fire from NoSQL alternatives such as Cassandra, MongoDB, and Couchbase. Customers have been slow to adopt Oracle's own NoSQL solutions, leaving the company at a disadvantage in this sea change.

As for IBM, it's the turnaround that never seems to gain traction. Big Blue has been selling low-margin assets to focus on software, services, and the Internet of Things in a big way. This strategy has been expensive so far, and margins have not yet expanded like they should.

Buying either IBM or Oracle today means that you expect the company to overcome these challenges. That analysis could throw my comparison right out the window. But at least you have a starting point.