What you need to know to understand this insurance giant.

American International Group (AIG -0.56%), commonly called AIG, is one of the largest insurance companies in the world. To understand this stock, first we must understand a bit of the context surrounding the company's recent history, then we can dive into the fundamentals that will drive it going forward.

A controversial past, regulatory challenges, and activist investors circling
AIG was one of the central characters in the drama of the financial crisis in 2008 and 2009. As the real estate crash began, the company found itself with a highly leveraged balance sheet and huge investment exposures to the riskiest subprime, derivative, and other real estate investments. The problems were too much to overcome, ultimately forcing the government to step in with a bailout that eventually grew to $182 billion. The political, public relations, and financial harm to AIG and its shareholders could hardly have been worse through this time.

It wasn't until 2012 that the government was able to recoup its cash infusion. Through a series of stock sales, the Treasury eventually collected $205 billion on the bailout.

One of the consequences of the financial crisis was the creation of the regulatory designation for "systemically important financial institutions." These large and complex organizations are required to carry additional capital on their books and are subject to increased regulatory scrutiny, increasing costs. Most of the "SiFi's," as they're known, are banks. However, a short list of non-banks also made the list, including AIG.

Over the past year, other non-bank SiFis have made the strategic decision to sell assets, simplify, and work consciously to shed the SiFi tag. General Electric has been the leader in this strategy, announcing last spring that it would sell off and wind down its formerly massive financial division, GE Capital. CEO Jeffrey Immelt was widely praised for the bold decision, and the company's stock has responded very positively during the time since.

Insurance giant MetLife was also designated as a SiFi and, like GE, is attempting to drop the designation. MetLife first filed a lawsuit challenging the government's assessment of its actual systemic importance, but has more recently announced plans accelerate its drive to drop the SiFi tag by divesting a significant portion of its business to shrink and simplify.

AIG has elected to move forward with a different strategy, accepting its designation as a SiFi for now while prioritizing plans to improve its operating performance first. Activist investors like Carl Icahn have publicly pressured the company to follow the lead of GE, MetLife, and others, but thus far AIG's only moves to divest have been small and insufficient to move the SiFi needle.

CEO Peter Hancock has said that a future split is possible, but the company will first focus on its currently in-process two-year plan to improve operations and return at least $25 billion in capital to shareholders. AIG returned $12 billion additionally to shareholders in 2015.

A large, but relatively simple business model
AIG today is much simpler than the business that was bailed out in 2009. This company is an insurance company, plain and simple, albeit one of the largest in the world. The company's divisions break down into the following organizational structure. 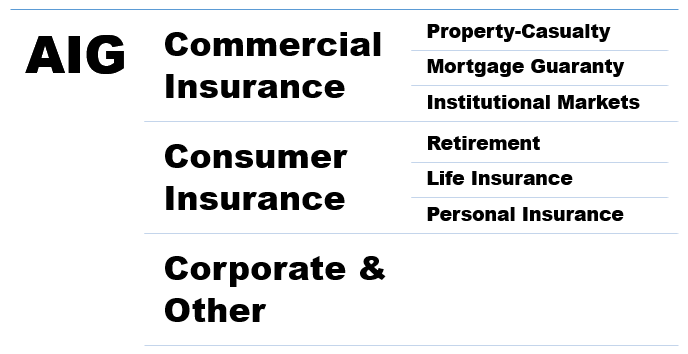 Most significant is the property-casualty insurance business, which had over $4.9 billion in earned premiums in the fourth quarter of 2015 alone.

Up-and-down fundamentals have led to a lackluster stock performance
For the fourth quarter, AIG reported a $1.8 billion net loss but was still able to produce a positive operating result of $2.2 billion for the full 2015 year.

AIG's major divisions reported combined ratios for the 2015 fourth quarter of 161.5% in property-casualty, 35.7% in mortgage guaranty, and 102.7% in personal insurance. Overall, the company reported a combined operating loss of $1.3 billion from insurance operations.

A combined ratio greater than 100% does not necessarily mean the company is losing money in aggregate though. Insurance companies can also earn substantial income from the investments it makes with the float provided by its insurance operations, shown in its other comprehensive income section on the balance sheet.

For example, in the property-casualty business customers buy insurance with premiums paid up front. Any claims that arise will be paid out later, meaning the insurance company gets to hold and invest that cash in the interim. That investment portfolio can be quite large and generate substantial returns. In fact, this is the method used by Warren Buffett to buy many of Berkshire Hathaway's best investments. Berkshire's insurance float as of year-end 2015 was nearly $88 billion.

At AIG, however, the traditional philosophy has been to prioritize the underwriting profits over the float. The fourth quarter's poor performance was primarily driven by a significant increase in reserves in the property-casualty business. That drove a significant underwriting loss for the quarter and reduced the company's other comprehensive income.

Looking forward
As of the time of this writing, AIG's stock is down 7.5% over the last 12 months compared to the S&P 500's 4.2% decline. The last five years saw AIG's stock rise 39%, well below the S&P's 50% increase. Two key factors will determine if the stock will find better fortune going forward. 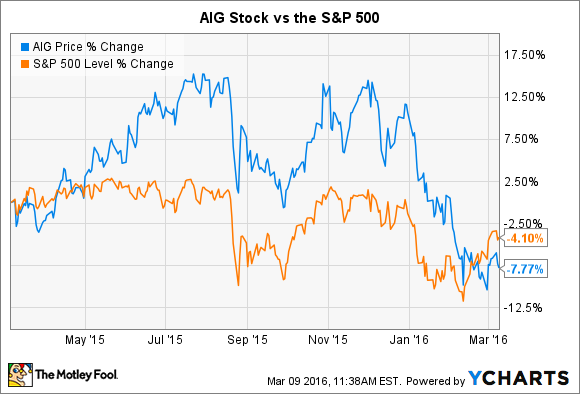 First, and most significant for long-term investors, is the company's ability to generate consistent profits from its primary insurance operations and secondarily from its other comprehensive income. Before the financial crisis, AIG was producing returns on equity between 15% and 20%. Those high levels may not be achievable today given the less risky business model and SiFi designation, but the company must find a way to produce better returns than the 5%-10% ROE seen over the past few years.

Second, and more short term in nature, will be the company's strategy to continue operating as a SiFi institution. MetLife, General Electric, and other non-bank SiFi's are taking the exact opposite approach, selling assets to shrink and drop the regulatory tag, and their stock prices have responded positively to that decision. Over the short and medium term, the success or failure of this strategy will most likely be the largest driver of changes to the stock price.