Please ensure Javascript is enabled for purposes of website accessibility
Log In Help Join The Motley Fool
Free Article Join Over 1 Million Premium Members And Get More In-Depth Stock Guidance and Research
By Evan Niu, CFA - Mar 11, 2016 at 9:00AM

The automaker now consciously avoids discussing the affordable electric crossover that the market has been expecting.

Relatively speaking, Tesla Motors (TSLA 1.24%) has always been pretty forthright about its product roadmap and general direction. It all dates back to Elon Musk's 2006 blog post about the company's top-down approach, which was well before the company had ever even launched a vehicle. Here we are a decade later, and Tesla has now launched three vehicles and is currently building its third vehicle platform. The important Model 3 will be built on this newest platform.

Automotive platforms are designed to produce numerous vehicles on the same platform. Over the years, Tesla has referenced a crossover SUV that would be built on this platform, even directly calling it the "Model Y" at various points in time to complete its S-3-X-Y product lineup. But Tesla doesn't talk about the Model Y anymore.

A tale of two product roadmaps
The first reference to this crossover was during Tesla's 2012 annual shareholder meeting. This was just weeks before the official Model S launch. Musk showed this slide of the future roadmap, pointing directly to a third-generation crossover: Last October, two interesting things happened. When asked if future models would include the same falcon-wing doors as Model X, Musk tweeted a public response, "There will be a Model 3 and a Model Y. One of the two will." He immediately deleted the tweet, but not before the broader media picked up on it. Days later (and this one got no media coverage), Tesla CTO JB Straubel gave a presentation at the University of Nevada, Reno discussing a wide range of topics including the progress on the Gigafactory. He showed this slide: 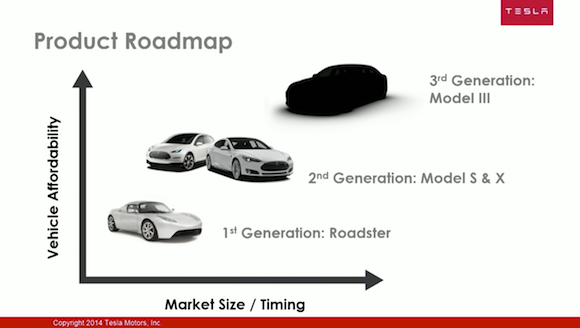 You'll note that the crossover reference is now gone. It would seem that Tesla has made a concerted effort to not discuss the Model Y going forward.

What gives?
More than likely, this is meant to focus everyone's attention on the Model 3, including internal development resources. It's also possibly an attempt to limit any potential Osborne Effect, where pre-announcing future products too early can hurt demand for current products.

While technically not a "current" product, the Model 3 is easily the most important car to Tesla right now from an investing perspective since Tesla's premium valuation is based on its ability to significantly grow unit volumes over the next four to five years. Tesla is targeting 500,000 vehicles per year by 2020, and that only happens if Model 3 is a success.

At the same time, America loves crossovers and SUVs (as do traditional automakers since it's also a very profitable segment). Bar none, crossovers were the most popular vehicle category in the U.S. in February at over 354,000 units sold. Many consumers are anxiously awaiting an affordable Tesla, but it's safe to say that a large fraction of those prospective buyers would prefer a crossover to a sedan (like the Model 3). Disclosing that the Model Y is on the horizon might keep them on the sidelines.

Tesla also has a reputation for leaking from the top. Musk has never shied away from media attention, and has even acknowledged that he causes trouble for his PR team by sometimes spilling the beans too early on major announcements. Looks like he's now trying to exercise some restraint.

Most important, the Model Y should still be in the pipeline, even if Tesla won't openly acknowledge it anymore, although your guess is as good as mine as to timing. I wonder what the second rule about Model Y is...