Citigroup stock is down by more than 35% from its 52-week high, but any of these three things could give it a boost.

Like most of the banking sector, Citigroup (C -0.63%) has been beaten down so far in 2016. Fortunately, the reasons for the decline don't appear to be specific to the bank -- rather, fears of a global recession and low energy prices are making investors nervous. With that in mind, here are three things that could give Citigroup's stock price a boost. 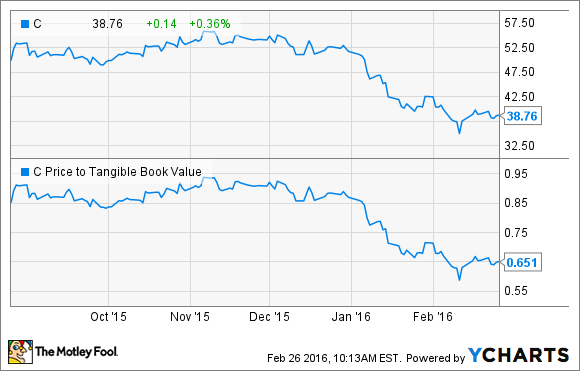 Oil and commodity prices could rebound
All of the big U.S. banks have significant portfolios of loans to oil and energy companies, and this is creating uncertainty among investors. Essentially, the persistent low oil prices are cutting into many of these companies' profits and could lead to a wave of defaults. Citigroup has $20.5 billion in funded exposure to energy companies, as of the end of 2015.

While the bank has increased its energy loss reserves by $300 million recently, we really have no idea how much in total has been set aside for this purpose. Citigroup's peers have been more willing to disclose information -- for example, Bank of America has set aside $500 million against its $21.2 billion energy portfolio and Wells Fargo has aggressively set aside $1.2 billion for just $17 billion in loans. Naturally, since Citigroup has declined to provide any more color on the issue, investors are assuming the worst.

Of course, if oil and gas prices rise on their own, it could greatly reduce the potential for losses. Citigroup has said it expects about $600 million in losses for the first half of 2016 if $30 oil prices remain and a boost in oil prices could dramatically reduce this number, and also set investors' minds at ease about future losses.

Citi's capital plan is approved, and the dividend rises
Ever since 2011, banks are required to submit annual capital plans for regulatory approval before increasing their dividends or buying back shares. And even with all of the improvements, Citigroup's dividend remains extremely low at just $0.05 per share each quarter -- an annual yield of just 0.5%.

With return on assets and return on equity metrics approaching the benchmark 1% and 10% levels, and with the ongoing risk from Citi Holdings greatly reduced, there is reason to believe that this will finally be the year shareholders see a meaningful dividend increase from Citi. Now, the dividend isn't likely to rise dramatically. I'd expect a doubling of the current level to a yield of 1% per year, but more important than the dividend itself is what it would say to the market about regulators' confidence in the bank.

On a separate note about the capital plan, I'll be paying more attention to the buybacks than any dividend increase this year, especially if Citigroup's stock price remains low. As of this writing, Citigroup trades for a 36% discount to its tangible book value. In other words, through share buybacks, Citigroup can buy back its own assets for just $0.64 on the dollar, creating real instant value for shareholders. A dividend increase may be a psychological victory, but a large buyback authorization is where the real value can be created.

Recession fears are overblown
Many experts are calling for a global recession in the near future. According to JPMorgan Chase strategists, consecutive quarters of earnings declines (like we've just seen) have preceded a U.S. recession 81% of the time. And in the other 19% of cases, the only way we avoided a recession was with monetary or fiscal stimulus.

Even Citigroup's own economists recently said that the chances of a recession are high and increasing, citing the fragile world economy, particularly the slowing growth in China and other emerging markets.

However, there are some reasons to believe the fears of a recession are overblown. For starters, the recent GDP growth rate of 0.7% isn't stellar, but it's still in positive territory. In fact, even though a global recession is being called for, those same Citi economists said that they don't believe the U.S. will fall into negative growth territory.

Unemployment and job growth numbers are looking pretty good, and January's data on durable goods orders showed the largest surge in demand in 10 months. Plus, Federal Reserve officials have indicated that they see a low risk of recession.

The point is that fears of a recession are one of the main factors that have been dragging down stocks in the early part of 2016, and the financial sector in particular. So if we start seeing clear evidence that a recession isn't in the cards, it could give a big boost to bank stocks like Citigroup.

So will any of this happen?
I'm pretty confident that Citigroup's capital plan will be approved, but whether the other two positive catalysts happen is anyone's guess at this point. Oil has rebounded recently, but we've seen short-lived rallies before. And despite the economic data I mentioned, a recession is certainly possible.

However, as long-term investors, we need to look beyond what could make Citigroup stock rise in the intermediate term and appreciate the current situation. We have a much-improved bank that's still trading at rock-bottom valuation thanks to uncertainty. Regardless of whether these three things boost Citigroup's stock price this year, investors who get in now could be pleased with their investment's long-term performance.