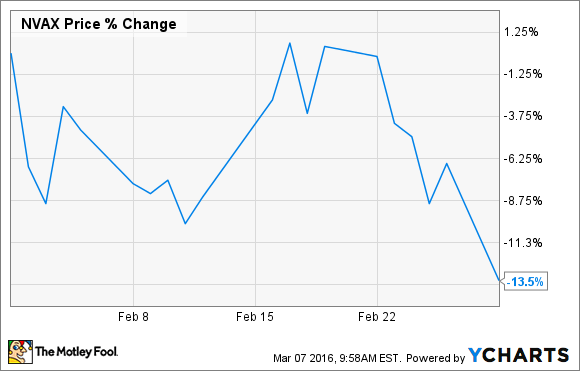 What: Novavax (NASDAQ:NVAX), a next-generation vaccine maker, saw its shares drop by over 13% in February, according to data provided by S&P Global Market Intelligence. The biotech's shares tanked last month after releasing its fourth-quarter earnings, where the company posted a wider-than-expected loss per share for the three-month period. Specifically, Novavax reported a net loss of $78.8 million in the fourth quarter, or $0.29 per share, whereas the Street was predicting a figure closer to $0.14 per share.

So what: Quarterly earnings for clinical-stage biotechs typically don't mean a whole lot in the bigger scheme of things. However, this double-digit drop by Novavax illustrates just how risk-adverse the market has become lately. After all, the company's higher-than-expected cash burn rate was actually due to the launch of the late-stage Resolve trial for its respiratory syncytial virus, or RSV, F vaccine in adults 60 years or older, along with another late-stage trial dubbed "Prepare" assessing the same vaccine in healthy pregnant women.

Now what: Novaxax's management noted they expect to release top-line data from the ongoing Resolve trial in the third quarter of 2016. If successful -- and there's good reason to believe it will be based on the vaccine's clinical progress so far -- Novavax's flagship experimental vaccine could easily become a blockbuster product, given that it would likely be recommended for all elderly adults in the U.S.

The bottom line is that the only available product on the market right now for this common ailment is AstraZeneca's palivizumab (brand name Synagis), and its use is presently limited to children at high risk of infection. Since the CDC reported last year that roughly 177,000 hospitalizations and 14,000 deaths occur per year as a result of RSV infections in adults aged 65 or older, Novavax is clearly targeting a huge unmet medical need with this experimental vaccine. As such, I think this recent dip in Novavax's share price represents a compelling buying opportunity for seasoned biotech investors who understand nothing is guaranteed when it comes to clinical trials.