Healthcare stocks rallied during the week, but shareholders of this one ETF made out best.

It was another good week to be a healthcare investor, as many of the most popular exchange-traded funds that focus on the industry ended the week higher. Several of these ETFs even put up returns that outperformed the market in general. One fund in particular -- the iShares Dow Jones US Pharmaceuticals ETF (IHE 1.02%) -- was this week's top performer, gaining 2.12% during the period, which easily beat the returns of the S&P 500. 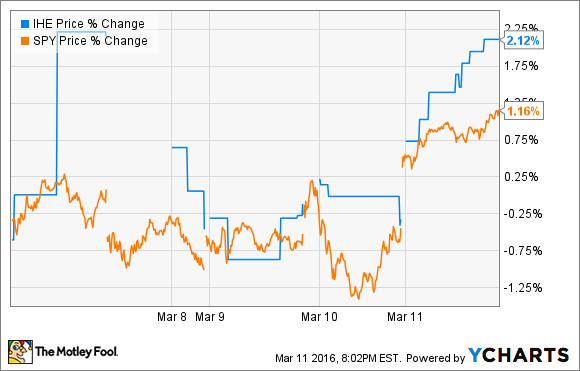 So what's going on inside this ETF that allowed it to perform so well?

Peeking inside
The iShares Dow Jones US Pharmaceuticals ETF is designed to offer investors an easy way to gain broad-based exposure to the U.S. pharmaceutical sector. The fund invests in 44 companies that generate revenue primarily from the sales of prescription or over-the-counter drugs or vaccines, and this ETF invests the the majority of its assets in the biggest names of the group.

A look at the fund's top 10 holdings is telling:

The fund carries an outsized exposure to the industry giants, with more than 62% of its assets held in its top holdings. Thus, when a handful of these stocks have a good week -- as they did this week -- this ETF performs well, too.

What went right this week
While every single one of this ETF's top 10 holdings ended the trading week higher, two companies in particular -- Mylan (MYL) and Perrigo (PRGO 1.11%) -- were this week's standout performers. 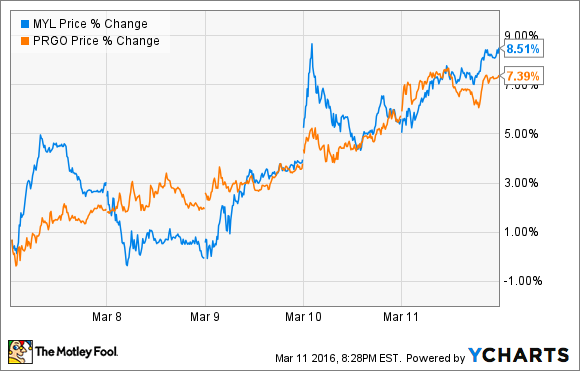 With both companies producing huge gains like this, you would assume that each had some noteworthy announcement this week that could help explain the outperformance, but that doesn't appear to be the case. The only news item of relevance that surfaced this week was that it was reveled that three of Perrigo's executives were awarded huge bonuses for thwarting the takeover attempt made by -- you guessed it -- Mylan. A filing with the SEC showed that Perrigo CEO Joseph Papa was awarded $2 million for his "key contributions related to Mylan's hostile takeover attempt." The company's CFO and general counsel also received more than $375,000 in cash and bonuses each for their efforts.

I find it unlikely that this news could even partially explain these companies' stock market performances this week, so a more likely explanation is that both stocks are just bouncing back from the drubbing they each have taken over the past year. Even after including this week's jump, shares of both Mylan and Perrigo are still down more than 30% from their 52-week highs and are trading for below-market P/E ratios, so this move could just be the markets awarding these companies stocks a slightly higher multiple.

Now what?
If you're an investor looking for an ETF that can help you bulk up your exposure to the U.S. pharmaceutical sector, then you might want to give iShares Dow Jones U.S. Pharmaceuticals a closer look.