Please ensure Javascript is enabled for purposes of website accessibility
Log In Help Join The Motley Fool
Free Article Join Over 1 Million Premium Members And Get More In-Depth Stock Guidance and Research
By Jeremy Bowman - Mar 12, 2016 at 8:38AM

An underwhelming earnings report sank shares of the fast-food chain.

What: Shares of west-coast burger chain Jack in the Box (JACK -0.76%) dipped 12% in February according to data for S&P Global Market Intelligence. A weak earnings report was the main culprit, as the chart below shows. 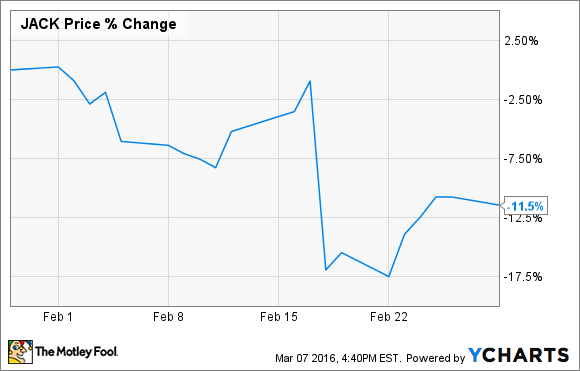 So what: Jack in the Box shares tumbled 17% on February after the fast-food chain posted disappointing fourth-quarter results. Earnings per share came in at $0.93, below expectations of $1.03, missing estimates for the second time in a row. Same-store sales growth was also tepid as comps at Jack in the Box restaurants were up 1.4% and 1.8% at its Qdoba Mexican Grill chain.

CEO Lenny Comma noted the impact of McDonald's launch of all-day breakfast, saying there was a notable lag in sales between 10:30 a.m. and noon, just the time that customers would have been tempted to try the all-day breakfast menu.

At Qdoba, comp sales growth slowed as the company lapped a double-digit increase the year before. Notably, the burrito chain failed to take advantage of the slowdown in sales at rival Chipotle as customers fled the fast-casual leader because of a food safety scare.

Now what: Jack in the Box shares recovered modestly after the earnings report, indicating that investors see the weak quarter as a temporary headwind rather than a lasting challenge. However, the challenges Comma cited in the report are not going away. In addition to McDonald's all-day breakfast, he also noted challenges from other competitors promoting "aggressive value offers," which includes Wendy's 4 for $4 menu, and Burger King's 5 for $4 menu. With the pressure from those major burger chains intensifying, Jack in the Box may be forced to counter with its value menu.

As for Qdoba, its failure to take advantage of Chipotle's weakness seems like a disappointment. Comma insisted he saw no tangible effect from Chipotle's food safety issues or its ongoing recovery, but it's possible Qdoba would have seen comps fall without Chipotle's woes. As Chipotle returns to full health, Qdoba could be at risk of losing customers.

Guidance for the full year was also disappointing, with comparable sales growth in the low single digits. Jack in the Box had been one of the stronger stocks in its industry over the last few years, but as its weak guidance shows, its current struggles are likely to persist.