American International Group (AIG -1.02%) stock is down 8% over the past year and remains ruinously below its pre-financial crisis high from 2007. The stock currently sits about 96% below that high water mark.

Much has changed since the financial crisis though, and there are good reasons to think that AIG stock could move higher this year. Here are three scenarios in which I think the stock could rise.

The company could split into three separate parts
Last fall, activist investor Carl Icahn revealed a large equity position in AIG and released a letter to CEO Peter Hancock. Icahn was less than thrilled with AIG's performance, and questioned the strategic direction that Hancock and the board of directors were taking the company.

By Icahn's logic, AIG should split itself into three separate companies and aggressively reduce costs. He argues that AIG has consistently traded below its book value, and that a split into three smaller, more focused companies would unlock that lost value. In addition to lower costs, he cites the challenges of an "increasingly onerous regulatory burden" as reason enough to shrink.

There's precedent for this type of move succeeding. Last spring, General Electric announced that it would sell, wind down, and otherwise divest its massive financial division, GE Capital. That move was designed to de-risk GE and reduce its regulatory burden. Since that announcement and the subsequent deals dismantling GE Capital part-by-part, GE's stock has outperformed the S&P 500 by about 10%. 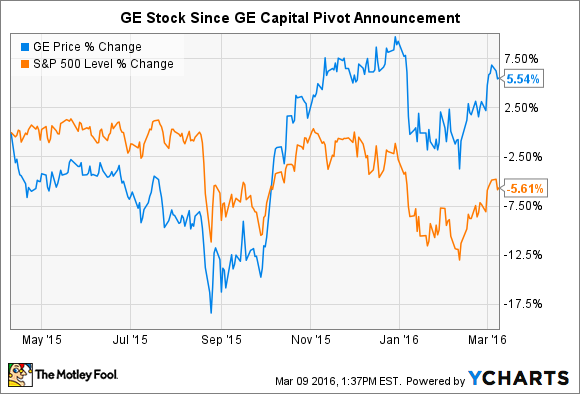 If Icahn is right and his plan prevails, AIG stock could very well rise.

CEO Peter Hancock could be right
On the other hand, no one is infallible, not even an investing legend like Carl Icahn. CEO Hancock has responded to Icahn's letter with the announcement of a divesture, though well short of Icahn's demands. Hancock thinks that AIG shareholders will be best served by focusing not on splitting the company up right now, but by getting costs down and returning capital to shareholders directly.

First, Hancock's point of view is colored by how the market is valuing other large insurers. AIG currently trades at 0.66 times its book value, only a hair below MetLife, another large and systemically important insurance company. MetLife is actively pursuing a strategy to shrink, simplify, and reduce its regulatory burden. If Icahn's theory was certain to succeed, it should follow that MetLife would command a higher valuation. But it doesn't. MetLife trades at 0.67 times book value.

Prudential Financial, a third comparable insurer, actually leads the group in price to book value at 0.75 times book value. This is significant because Prudential has been considered systemically important since 2013 and has not announced any plans to shrink or sell assets. Based on Prudential's numbers, Hancock's logic passes muster. Smaller isn't necessarily better, but rock solid performance always is. 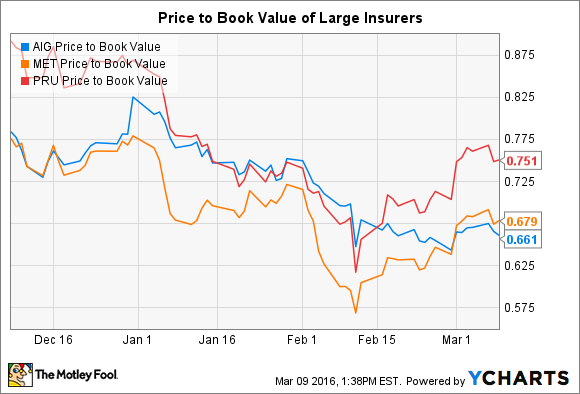 Instead of leaving shareholders at the mercy of the market, Hancock wants to pay them more directly. The company returned $12 billion via dividends and buy backs in 2015 and plans to distribute an additional $25 billion over the next two years.

If Hancock is right, then AIG stock could rise, driven by improved operations, stability, and that huge boost in capital distributions.

I see two primary reasons the stock has fallen so abruptly, and both of which are fluid situations that do not necessarily reflect such a large change in the company's actual value.

First, there's the Icahn situation. The stock popped in the weeks following his letter to the company. Since that time, Hancock and the company have made it clear that while they are open to working with Icahn, they will not simply bow to his will. For the investors simply following Icahn's lead, that response could have tempered their expectations and led the price lower.

More likely though, I think AIG is a victim of the market wide problems experienced thus far in 2016, compounded by a disappointing fourth quarter earnings report. AIG reported a large operating loss for the fourth quarter driven by larger loss reserves and a decrease in alternative investment income. That bad headline overshadowed the progress the company made in expense reductions and other operating metrics.

Again, the poor results from the fourth quarter are transient. It seems likely to me that the company will return to operating profits in the coming quarters and continue benefiting from cost improvements. If the market has in fact overreacted and sent AIG's stock too low, too fast, then the stock could rise regardless of how the battle between Icahn and Hancock turns out.

Jay Jenkins has no position in any stocks mentioned. The Motley Fool owns shares of General Electric Company. We Fools may not all hold the same opinions, but we all believe that considering a diverse range of insights makes us better investors. The Motley Fool has a disclosure policy.