Berkshire Hathaway (BRK.A 0.05%) (BRK.B -0.03%) recently published Warren Buffett's annual letter to shareholders. As usual, it contained Buffett's commentary on all things Berkshire, some thoughts on investing, in general, and even Buffett's predictions of where America is heading as a nation. Here are four highlights you may be interested in.

Berkshire is getting cheap enough to be a "Buffett stock"
Buffett made the case in the latest shareholder letter that Berkshire should be valued significantly higher than book value due to the asymmetrical accounting treatment of the company's successful and unsuccessful investments. Essentially, when Berkshire buys a company that does poorly, the "economic goodwill" that Berkshire paid for gets written down, thereby reducing the book value. However, as Buffett correctly pointed out, some of his purchases have been home runs -- and Berkshire hasn't written up their book value at all.

Berkshire's exact intrinsic value is impossible to know, and is somewhat a matter of opinion. In the past, Buffett has said that he would consider shares to be expensive as they approached two times book value. And he reiterated in the new letter that Berkshire would be "delighted" to repurchase its shares at 1.2 times book value. At this level, Buffett says, Berkshire's shares would be trading for a meaningful discount to their intrinsic value, and would instantly add value for investors.

As you can see, even after the recent market rebound, Berkshire is trading toward the low end of the 1.2-2.0 times book-valuation spectrum. 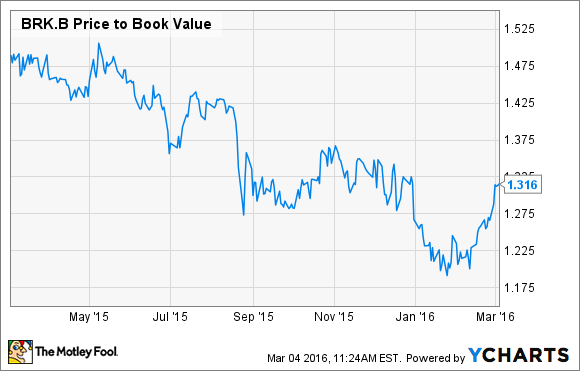 One of Berkshire's biggest competitive advantages in Buffett's eyes is his willingness to make big investments in businesses he doesn't control -- something Berkshire's peers are generally unwilling to do. In other words, the option to acquire businesses in their entirety, or buy stocks creates more potential opportunities to pursue. And this makes perfect sense -- after all, if Buffett was unwilling to use Berkshire's capital on individual stocks, he wouldn't be sitting on a 720% gain in American Express, or an 870% gain in Coca-Cola.

In regards to Berkshire's wholly owned subsidiaries, one competitive advantage Buffett mentions again and again is the quality of the managers in charge. Buffett likes to take a hands-off approach when it comes to Berkshire's subsidiaries, so he considers strong managers to be one of the best assets a business can have.

In this particular letter, he praised Ajit Jain, who manages the Berkshire Hathaway Reinsurance Group, who insures risks that no other company wants to take on, and does so without exposing Berkshire to unnecessary risks. Buffett also singled out Kevin Clayton of Clayton Homes, whose business model delivered better payment behavior than most other mortgage lenders, despite lower credit scores and income levels of borrowers.

He also mentioned the competitive advantages of the businesses themselves. GEICO's low costs create an economic moat that "competitors are unable to cross." Berkshire Hathaway Energy (BHE) has recession-resistant earnings, and much-more diversity of its revenue streams than most peers.

It's impossible to discuss the advantages of all of Berkshire's businesses in a single article, but Buffett wants investors to know that each business was handpicked for a good reason.

The biggest Buffett stock you don't know about
There are many people who keep track of Berkshire's investment portfolio for a variety of reasons. Some like to track what Buffett is buying and selling, while others hope to get into some of Berkshire's existing holdings at a discount.

When you look over a list of Berkshire's common stock holdings, you should be aware that one of the company's largest investments is nowhere to be found -- Bank of America (BAC -0.17%). Thanks to a savvy investment in the aftermath of the financial crisis, Berkshire has the option to buy 700 million shares of Bank of America for $5 billion – just more than half of its current market value.

In the letter, Buffett made it clear that Berkshire intends to be a Bank of America shareholder for the long haul, stating that the options will most likely be exercised just before their September 2021 expiration. And Berkshire may use the $5 billion in Bank of America preferred stock it also owns to fund the purchase.

The point is that even though Berkshire technically doesn't own a single common share, Bank of America is effectively the company's fourth-largest equity investment, and investors who follow Berkshire's portfolio should consider it as such.

America's future is bright
As most of you are well aware, there has been lots of negative talk from both sides of the political spectrum about the state of America's future. Buffett wants investors to know that this is nonsense -- America will be just fine.

He went on to show that even if GDP growth stays at an historically low 2% per year, it would still translate to real (inflation-adjusted) per-capita GDP growth of 34.4% over a 25-year period, which means a better standard of living for every American in every income class.

Finally, Buffett's message to investors is that American innovation is alive and well. We will continue to innovate and find more efficient ways of doing things. As Buffett puts it, "For 240 years, it's been a terrible mistake to bet against America, and now is no time to start."