A rich valuation, high expenses, and an at-risk balance sheet raise questions about this biotech.

Ariad Pharmaceuticals (NASDAQ: ARIA) already has one cancer drug on the market, and if things go its way, it could have a second cancer drug approved as soon as next year. That's good news, but investors may want to temper their enthusiasm. As you'll see in the following three graphics, there are some important reasons why buying shares in Ariad Pharmaceuticals may be too risky right now.

A year after winning an early approval from the FDA, it was discovered that it can cause dangerous blood clots in some patients, and as a result, Iclusig was temporarily yanked off the market in 2013. The drug was relaunched with a stricter label in 2014, and despite its past, Iclusig sales leapt more than 100% to $112.5 million last year.

That's unquestionably impressive growth, but I can't help thinking that a lot of Iclusig's upside may already be priced into Ariad Pharmaceuticals shares. After all, the company's $1.2 billion market cap means shares are trading north of 6 times forward revenue, and that's no bargain. No. 2: Sky-high expenses
Ariad Pharmaceuticals has done a much better job growing sales of Iclusig than it's done controlling its expenses.

Operating expenses soared $70 million to over $330 million in 2015, and that's worrisome, because it means that the company's expenses grew about $13 faster than sales of Iclusig.

Granted, some of Ariad Pharmaceuticals' spending increase is tied to the development of brigatinib, a therapy for ALK+ non-small-cell lung cancer that could make its way to regulators at some point this year, but until management reins in spending, there's no telling when it will stop losing money. Last year, its soaring operating expenses caused the company to lose $231 million alone. 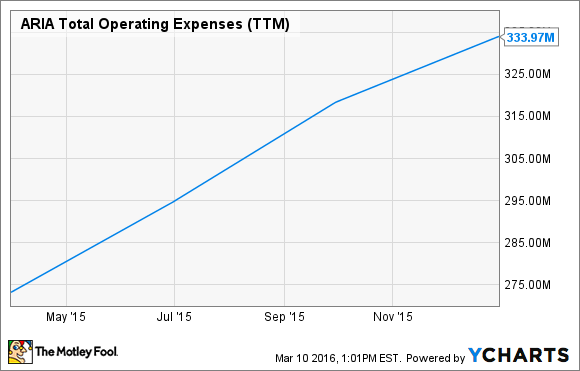 No. 3: Tapping the reserves
The company's spending pace and mounting losses mean it's drawing down its cash stockpile.

In the past year, cash and equivalents on Ariad Pharmaceuticals' books slipped from over $350 million to $231 million. Importantly, that $122 million decline in cash helped stockholder equity go negative. Because the company's cash is shrinking, it has $429 million in long-term debt, and its book value is underwater, there's serious reason for concern. Tying it together
Ariad Pharmaceuticals was reportedly in discussions to sell itself last year, but it couldn't agree on a price, so those negotiations came to a standstill.

Instead, the board of directors installed Paris Panayiotopoulos as the company's new CEO on Jan. 1, and one of his first items of business will be getting the company's financial house in order.  During the company's recent earnings conference call, Panayiotopoulos indicated he's in the process of looking at his options, saying that "there are no sacred cows" in his quest to boost shareholder value. If he can find enough fat to cut, then perhaps this company becomes less risky, but until we learn more about his plan, investors might want to consider investing in other ideas instead.