It's been a tough year so far for the genomic sequencing leader's stock. Are better days ahead?

It's been a rough winter for Illumina (ILMN 3.89%) shareholders. The genomic sequencing company's stock plunged nearly 30% by early February before regaining some of those losses. However, Illumina's shares are still way down year-to-date. Despite the rocky start in 2016, could now be a good time to buy Illumina stock?

CEO change
Some investors might scoff at scooping up shares of Illumina right now in light of the company's upcoming CEO change. On March 7, Illumina announced that longtime leader Jay Flatley will step down in July. The current president of the company, Francis deSouza, will replace Flatley.

It's easy to understand concerns about this change, considering the tremendous record that Jay Flatley has built. Since joining Illumina in 1999, Flatley helped grow the company's annual revenue from $500,000 to more than $2.2 billion. He led the development of major advances that greatly reduced the cost of genetic sequencing.

Will Francis deSouza be able to continue Jay Flatley's record of success? I think he will. Remember that Flatley hand-picked deSouza in 2013, instantly making him the heir apparent to eventually take the helm. Since then, deSouza has led several key initiatives, including the launch of the MiniSeq desktop sequencing system.

Illumina is, above all else, a technology company. DeSouza's background in leading technology companies should be a big plus for Illumina as it moves forward. He co-founded two companies, Flash Communications and IMLogic, both providers of enterprise instant messaging services. Both companies were bought by larger corporations, where deSouza also assumed key executive roles.

Investors' worries should also be set at ease that Jay Flatley isn't riding off into the sunset completely. He will remain with Illumina as Executive Chairman of the Board of Directors.

Earnings concerns
Slowing earnings stands as another objection to buying Illumina stock right now. In the fourth quarter, the company reported lower earnings year-over-year. Should investors be concerned about Illumina's earnings potential? I don't think so.

First, it's important to know that earnings aren't suffering because of poor sales. Actually, Illumina's top line has been growing steadily for quite a while with no slowdown in sight. 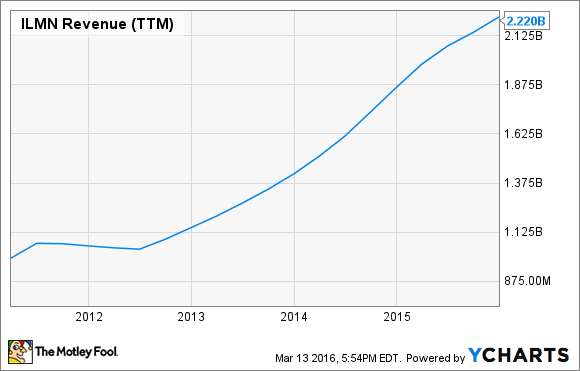 Second, understanding why Illumina's earnings slipped in the fourth quarter is helpful. The company's profit margin was lower during the quarter largely because of stock-based compensation expense. And while total operating costs soared, the primary factor behind the negative year-over-year comparison was an $82 million adjustment for legal contingencies in 2014. Neither of these should trigger alarms about Illumina's future.

There is some good news on the competitive front, though. Smaller rival Pacific Biosciences of California (PACB 4.53%) recently forecast a slower launch schedule for its next generation gene sequencing system. While Pacific Biosciences' executives seem to be deliberately trying to slow things down to make sure the launch is successful, it presents an opportunity for Illumina to take advantage of the situation and minimize erosion of its market share.

Over the longer run, smaller players like Oxford Nanopore could give Illumina a run for its money. The British company has developed a handheld molecular analysis device. However, for now at least, those devices aren't nearly as accurate as the ones marketed by Illumina. And Illumina isn't taking the challenge lightly. In February, Illumina filed a patent infringement lawsuit against Oxford Nanopore.

On balance
Is now a good time to buy Illumina stock? I think the answer is "yes".

Any concerns about Francis deSouza taking over as CEO are overblown, in my view. I don't expect any negatives related to this change. DeSouza is very capable -- and Jay Flatley will still be around to provide guidance.

As for earnings, Illumina projected full-year 2016 earnings right in line with what Wall Street expected. The fourth-quarter year-over-year decline seems to only be a temporary matter.

And while competition is always a factor, there's no reason to think that any rival is in position to challenge Illumina's leadership in the immediate future. It will take a while for Thermo-Fisher to assimilate Affymetrix. The threat from Pacific Biosciences won't materialize as quickly as expected. Smaller up-and-coming rivals still have a long road ahead.

The underlying business fundamentals that were in place prior to Illumina's stock plunge are still there. High-end sequencing systems are still selling briskly. Illumina appears to have turned the corner with its desktop sequencing business. I also like the longer-term potential for the company's GRAIL spin-off, which is focusing on early cancer screening tests.

Winter always leads to the brighter days of spring and summer. I suspect that the rough winter for Illumina's shareholders will likewise give way to sunnier performance for this beaten-down stock.

Keith Speights has no position in any stocks mentioned. The Motley Fool recommends Illumina and Pacific Biosciences of California. We Fools may not all hold the same opinions, but we all believe that considering a diverse range of insights makes us better investors. The Motley Fool has a disclosure policy.