The performance of motion processor vendor InvenSense's (NYSE:INVN) stock has been nothing short of abysmal, with shares plummeting nearly 21% year-to-date and almost 52% over the last year. The silver lining, if one could even call it that, is that the stock managed to bounce off of its 52-week low of $6.60 per share. 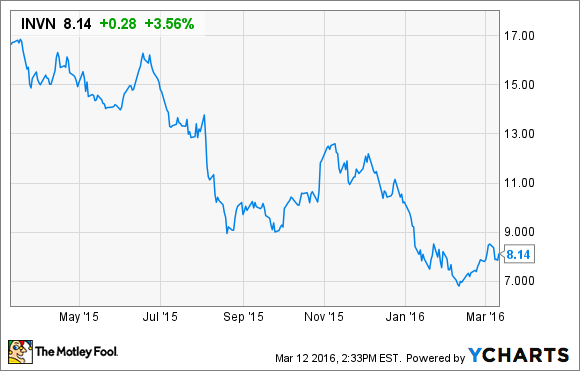 I must admit that I have been tempted to go "bottom fishing" by adding shares of struggling InvenSense to my portfolio. However, after a good deal of consideration, I've decided against doing so. Here's why.

One of the main "selling points" for InvenSense was that its motion processing chips were head-and-shoulders above those from the competition, which allowed it to virtually sweep the high-end smartphone market. Indeed, after winning the Apple (NASDAQ:AAPL) iPhone 6, InvenSense had won the premium smartphone designs that really mattered.

What I found fairly unsettling is that InvenSense disclosed ahead of the launch of the Samsung (NASDAQOTH: SSNLF) Galaxy S7/S7 Edge that it wouldn't provide the 6-axis motion sensor (3-axis gyroscope + 3-axis accelerometer) for that design -- the socket would, as Chipworks revealed, ultimately go to rival ST Microelectronics (NYSE:STM).

Even the gyroscope that's used in the rear camera module to enable support for optical image stabilization, per Chipworks, comes from ST Microelectronics (though InvenSense management did indicate that it will be "sharing that [socket] with a competitor." The order allocation split is not clear.

So, why am I harping on the loss at Samsung? Well, if Samsung saw fit -- for what InvenSense claims are cost-related considerations -- to forgo an apparently higher-performance InvenSense part for a cheaper ST Micro part, what's to stop Apple from threatening to do so in the future?

Apple represents a significant part of InvenSense's volume and revenue, and if Apple were to show signs that it is "unhappy" with how much it is paying for InvenSense product, I suspect that InvenSense would be willing to agree to further pricing concessions -- especially in light of what appears to be uncertainty around Samsung.

This would have a negative impact on both average revenue per chip as well as, more importantly, gross profit margins.

The stock isn't even "cheap"
A common misconception is that because X number of dollars can buy a lot of shares of a particular company that it is "cheap." By this reasoning, for example, InvenSense is "cheap" at around $8 per share while Apple is an "expensive" stock at around $100 per share.

However, I think this is a really bad way to think about it. "Cheapness" is really a function of how much earnings power a company has per year for each share purchased. By this metric, InvenSense is simply not cheap.

On the bright side, InvenSense does appear to have a significant amount of cash on the books -- nearly $300 million in cash and short term investments partially offset by about $149 million in long-term debt, for a substantial net cash position.

InvenSense appears to have a real issue with profitability. And, without the promise of continued rapid growth from here on out (consensus estimates call for a 3.5% revenue decline in the coming fiscal year), it's hard to excuse struggles with profitability.

I'll keep InvenSense on my watch-list and if I see developments that might suggest that revenue/earnings are set to grow nicely beyond fiscal year 2017, it might be tempting to start a position. For now, though, I'm sticking to the sidelines.