The company has been on a roll for years, beating its peers' performance as well as the market's. But can it last?

You know what they say about all good things.

The performance of Honeywell (NYSE: HON) has been a very good thing for more than a decade, beating not only the S&P 500 but also industry peers such as General Electric (NYSE: GE) and United Technologies (NYSE: UTX): 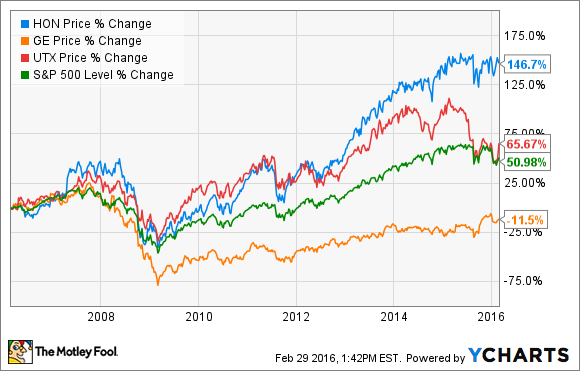 But sooner or later, something will bring a company's great run to an end. Here are the three biggest risks that could bring Honeywell's success to a halt.

Risk No. 1: Margin stagnation
Over the past 10 years, the company's operating margins have almost doubled, outpacing its peers in margin growth: 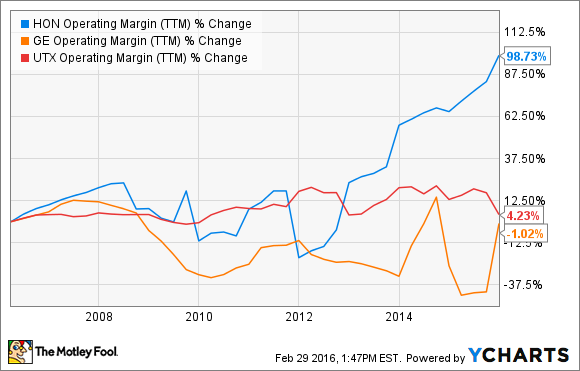 The trend shows no signs of slowing. In 2015, the company's revenue declined by 3% YOY, but profits were up because of margin expansion. Sector margins increased 290 basis points YOY to 18.8% in the fourth quarter alone. Honeywell sees the rollout of its HOS Gold operating system driving expansion even further. So in the near term, the margins look solid.

Margins can't continue to expand forever, though. And if revenue continues to shrink and margin expansion maxes out, profits are going to begin to suffer as well. It doesn't look as though we're at that point quite yet: Honeywell's overall operating margins are in line with its peers, so there appears to be room for further growth: 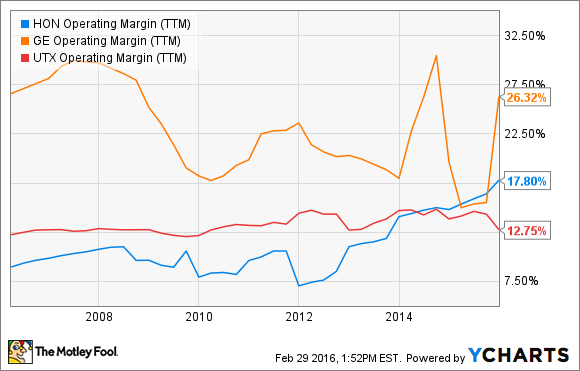 But careful investors will keep a watchful eye out for future margin stagnation and earnings declines.

Risk No. 2: Cyberattack
It stands to reason that a company itself best understands the risks it faces. That's why, in its annual 10-K SEC filing, a company is required to disclose the principal risks and uncertainties facing its business. In Honeywell's latest 10-K, it identified "cybersecurity incidents" as one such risk. The language the company used is far from reassuring: "While we have experienced, and expect to continue to experience, these types of threats and incidents, none of them to date have been material to the company."

For Honeywell, such an attack could have farther-reaching consequences than just some stolen data, which alone can be costly and harmful. Like its rival GE, Honeywell is increasingly relying on software packages, including its new operating system, HOS Gold, to supplement its industrial equipment sales. And as Honeywell wisely recognizes, the risk of cyberattack "is enhanced by the increasingly connected nature of our products."

For Honeywell's industrial control systems and military aerospace businesses, a successful cyberattack could be incredibly damaging. Just imagine the effects if, for example, a critical industrial plant was forced offline or a military jet's control system was overridden. The company could incur massive costs in litigation, damages, fines, and increased cybersecurity costs -- not to mention the damage to the company's reputation and relationships with its customers, many of whom might choose to become former customers.

It's hard to overstate the risk of a successful cyberattack to Honeywell, and as is the nature of cyberattacks, you won't know it's coming until it arrives. The good news is that the company is clearly aware of the risk and the damage potential, so you have to assume it's doing everything it can to protect itself.

Risk No. 3: A possible United Technologies merger
Honeywell recently announced that it has been in talks with rival United Technologies for more than a year about a possible merging of the two companies. Honeywell CEO David Cote even went public with an offer, which was swiftly rejected. But if the talks have really been going on for as long as reported, it's unlikely Honeywell is just going to give up and go home.

Big mergers like the one Honeywell is proposing are inherently risky. Aside from potential challenges from regulators, who might force the company to sell off some of its assets to approve the merger, pitfalls can come from shareholders, customers, clashing corporate cultures, or changes in the broader economy.

Cote believes that the benefits outweigh the risks. He believes a combined company would have double-digit EPS growth (something he has delivered at Honeywell for six consecutive years) and improved cash flow. The company would also be very large, with nearly $100 billion in annual sales. That size would make it almost as large as GE, whose 2015 revenue was $117.4 billion.

Ultimately, the merger would radically transform the company, and considering how well the company has been doing, a radical transformation may not be welcome. The good news is that this merger is on hold -- at least for now.

The Foolish bottom line
Honeywell is a well-managed company with an excellent track record of creating value for its shareholders. But that doesn't mean it's a company without risks. There are dangers in staying on its current trajectory: Improving margins combined with negative overall earnings growth may ultimately prove unsustainable. There are risks in pursuing new strategies, such as the United Technologies merger. And there are ever-present risks no matter what strategy the company takes, such as the risk of a cyberattack.

Investing, even in a solid company like Honeywell, ain't for the faint of heart.

John Bromels has no position in any stocks mentioned. The Motley Fool owns shares of General Electric Company. We Fools may not all hold the same opinions, but we all believe that considering a diverse range of insights makes us better investors. The Motley Fool has a disclosure policy.