The S&P 500 slipped, but the Dow notched a fresh high for the year on Tuesday.

Stocks spent nearly all of today's trading session in negative territory but ended mixed. By the closing bell, the S&P 500 (SNPINDEX: ^GSPC) had lost 4 points, or 0.2%, while the Dow Jones Industrial Average (DJINDICES: ^DJI) added 22 points, or 0.1%, to touch a new high for the year. 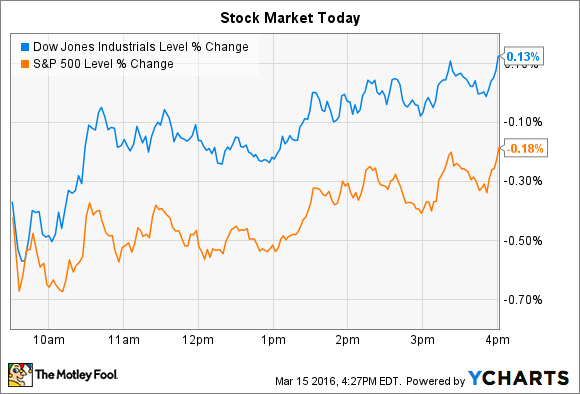 In economic news, the Federal Reserve kicked off its two-day meeting, after which it will publish a monetary policy statement on Wednesday, March 16, at 2 p.m. EDT. Economists aren't expecting another interest rate increase from the Fed, but the central bank's updated projections are likely to move markets tomorrow.

The iPhone business
Apple's 2% jump made it the best-performing stock in the Dow today. In fact, the tech giant's shares hit a two-month high in the wake of growing optimism around its iPhone business.

Morgan Stanley analyst Katy Hubert said in a client note that new tracking data indicates Apple could sell 57 million units in the March quarter, which would be solidly above consensus estimates targeting 50 million. Every additional one million iPhone sales would add $640 million of revenue and $0.04 per share of earnings to Hubert's quarterly top and bottom line targets (the firm estimates Apple will book $51 billion of sales and $1.94 per share of profit).

In any case, it's likely that Apple will suffer a year-over-year decline in its iPhone business for the first time when it posts its next quarterly report, but that's not as bad as it sounds. The year-ago quarter was unusually strong due to supply problems that pushed sales from the prior period into the March quarter. Last April, Apple booked an incredible 40% spike in iPhone sales to 61 million units.

Meanwhile, on Monday, Apple will hold a media event where it is expected to unveil refreshed iPads and a new 4-inch iPhone model that could extend its reach into new markets. CEO Tim Cook told investors in January that management sees "very strong interest in iPhone" from both consumers and businesses. The stock took a step in that optimistic direction today.

A reduced outlook
Valeant Pharmaceuticals cratered 51% on over ten-times the drugmaker's average daily trading volume after it posted preliminary, unaudited fourth quarter earnings results that included sharply lower sales and profit targets. Revenue will be $11.1 billion, and adjusted profit will be $10 per share in 2016, management said, far below the $12.6 billion of sales and $13.50 per share earnings it had previously forecast.

Executives blamed surprisingly weak sales in its gastrointestinal business, along with declines in its ophthalmology and women's health divisions, for the drop. It also pointed to "management transition issues and continued organizational distractions" that further hurt operations in the quarter.

Making matters worse, the company's press release contained an error in a key section that investors watch closely. Valeant's initial report included an outlook for adjusted earnings over the next four quarters of between "$6.2 billion to $6.6 billion". Subsequently, the drugmaker issued a correction that pulled the outlook down to $6 billion.

As rough as that lowered outlook is for investors, Valeant's more immediate challenge is to conclude its accounting review, so it can file its delayed but audited 10-K financial statements. The company aims to do this "as promptly as reasonably practicable," it said in a separate filing.