Freeport McMoRan is a giant miner, which is an expensive business, but it doesn't cost as much as you might think to keep going

Freeport McMoRan (NYSE: FCX) is scheduled to spend $3.4 billion on capital expenditures in 2016. Although that's nearly 50% less than what it spend last year, it's still a big chunk of change. But there's more to this number than meets the eye. Here's how much Freeport has to spend to stay in business and why you should care.

The albatross
The first thing to note about Freeport is that it's now two distinct businesses. On one side it's a miner, and on the other it's an oil driller. The latter business has been a sore spot since oil prices started to decline in mid-2014, just a year or so after it entered the space. In fact, Freeport has made it pretty clear that it would like to get rid of the oil segment and, again, refocus on its mining business.

The problem really comes down to cash flow. In 2015, spending in the oil and gas business ate up roughly $3 billion. That's more cash than any of Freeport's mining businesses used. (Note that the total spent for mining was larger, though, when added together.) And with oil and natural gas prices in the dumps, there were diminishing returns on that $3 billion oil investment as the year progressed. That helps explain why capital spending in this segment is expected to be only around $1.5 billion this year.

That's not out of line with other oil companies. For example, integrated oil major Chevron (NYSE: CVX) plans to cut its capital spending by as much as 26% in 2016. Hess Corp. (NYSE: HES), a less diversified energy player, is planning on trimming its capital budget by 40% this year. That's 20% more than it had originally planned.

Freeport's spending, however, could fall to as low as $600 million in 2017, as Freeport looks to shut down production in the face of a troubled energy market. So expect capital expenditures in this segment to drop off materially in the second half. The company has to spend this money to keep pumping oil, but that only makes sense if the wells are profitable to work. Increasingly, they aren't. Freeport has basically put this division into "care and maintenance mode" as it looks for a buyer or some other solution to get out from under the ill-fated investment. 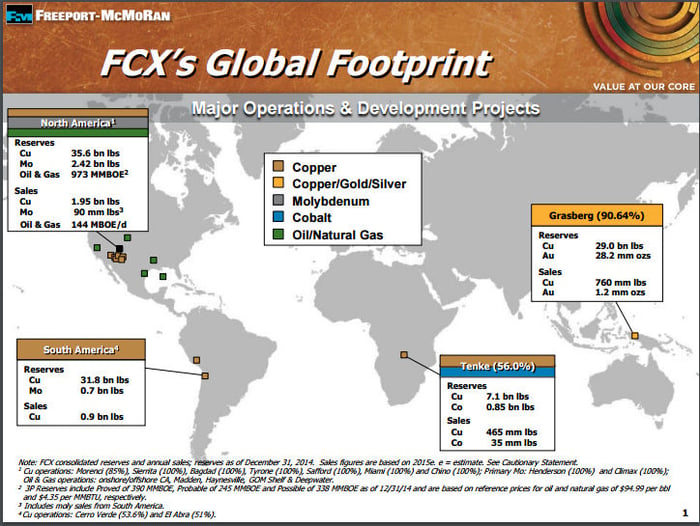 The core
Capital spending in the mining business, meanwhile, is slated to total around $1.9 billion. But there are some things you need to understand about that number. For example, $800 million of that total is earmarked for underground development at Freeport's Grasberg mine, and $400 million is for the remaining costs for an expansion at its Cerro Verde mine. These two big-ticket items are investments to support future growth. There's another $200 million in there for other growth projects, too.

The truth is, sustaining capital spending in the mining business is only going to be about $500 million this year. That's not a huge sum for a company that brought in revenues of nearly $16 billion in 2015, about $14 billion of which came from the mining space. In fact, Freeport believes that its mining operations will be cash flow-positive next year after the total $1.9 billion in capital expenditures, assuming commodity prices don't take another swan dive.

Why is this important?
So why should you care about all of this? Because Freeport McMoRan's core mining business remains a valuable asset capable of throwing off cash even in a difficult market. Even better, it can do that while still spending on future growth. (That means it could probably cut more out of capex if it had to.) This is the story that's being hidden by the company's current oil troubles and one that management has been trying to explain to investors for some time.

Of course, if Freeport can't get out from under oil, it may not matter how good the mining business is. For example, the company's hefty debt load, a direct function of its oil investment, recently forced it to sell a piece of one of its copper mines, since no one's biting at the oil assets. However, that's akin to starting to sell the family silverware -- not exactly the first choice of assets to sell.

So as you look at Freeport, don't get blinded by the troubles it's facing in oil, but do recognize the risks it faces because of this ill-timed investment. If the miner can get out from under the oil albatross, there's still a lot of value in this copper play.

Reuben Brewer has no position in any stocks mentioned. The Motley Fool owns shares of Freeport-McMoRan Copper & Gold,. The Motley Fool recommends Chevron. We Fools may not all hold the same opinions, but we all believe that considering a diverse range of insights makes us better investors. The Motley Fool has a disclosure policy.