Some say this social media company's shares are overpriced. I say they're shortsighted.

Chances are this woman checked her Facebook profile at least once while sitting down. Image source: Pixabay. .

Every month, my wife and I contribute a small sum to our retirement portfolios via an investment in a single stock. This month, we'll be putting our money behind a well-known stock that many consider to be expensive: Facebook (META 2.03%).

But really, is it that expensive?
If you go to many financial websites, Facebook's stock trades for a pricey 84 times earnings. But to be fair, those are generally accepted accounting principles (GAAP) earnings -- which are heavily influenced by stock options granted to employees.

While those awards are worth keeping track of, many investors -- myself included -- believe that non-GAAP earnings provide a better measuring stick. On this front, Facebook trades for a much-more-reasonable 48 times trailing earnings. This also jibes well with the fact that the company trades for roughly 50 times free cash flow (FCF).

But even at 48 times earnings, many may think that Facebook is overvalued. That's fair, but it's at least worth mentioning that the company has grown non-GAAP earnings by 52% since going public.  Looking ahead, analysts expect the trend to continue, with earnings growing by 33% per year between now and the end of 2019.

Here's what Facebook's current price tag looks like when viewed against those expectations.

OK, OK -- I can hear the complaints already: "Who cares about analysts' estimates?! They're usually wrong anyway!"

As far as Facebook is concerned, you'd be right: The analysts have almost always been wrong -- because Facebook has absolutely blown them away. When it comes to non-GAAP earnings, here's how the company has fared vs. expectations since going public.

Facebook Earnings Surprises
Create column charts
Only once in 15 earnings reports has Facebook come up short of what Wall Street was expecting. On average, the company has beaten expectations by 16% per quarter. As you can see, the margin of those beats fell off considerably in the second half of 2014 -- as "experts" began to catch on to the fact that Facebook was massively successful at selling mobile advertising.

Even if we low-ball it and assume that Facebook will "only" beat expectations by 5% per year moving forward, the stock could actually be even cheaper than the estimates above suggest.

What about the business itself?
Make no mistake about it: Though Facebook is a free service that's one of the most popular destinations on the Internet -- and though it owns some increasingly important brands in Instagram, WhatsApp, and Oculus Rift -- as far as investors are concerned, Facebook is an advertising business.

With over 890 million daily active users, Facebook has accumulated mountains of information about consumers. Alphabet (GOOG -0.28%) (GOOGL -0.27%) is the only other company that can even touch that kind of data trove. All of this user data allows the company to offer ads that are ultra-targeted to reach the right audience. Companies -- especially small ones with limited means -- are willing to pay for such access.

Ad revenue absolutely exploded during that time frame, increasing by 55% per year between 2010 and 2015. 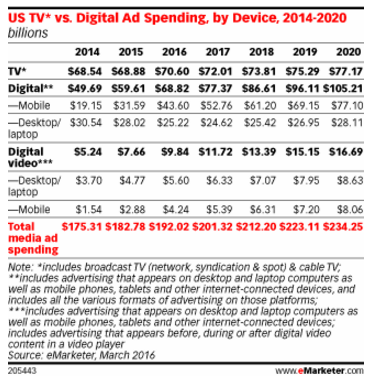 Not surprisingly, Alphabet -- through Google -- and Facebook are the big dogs in mobile advertising, according, again, to eMarketer. Facebook's leading position should help it attract an outsized portion of that increase in spending. 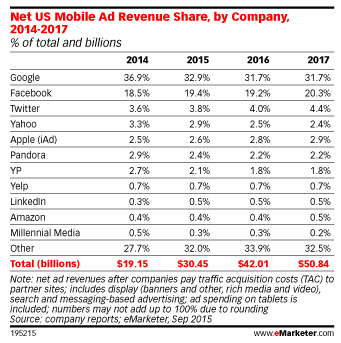 In fact, Google is actually expected to lose market share over the next few years, while Facebook, as well as Twitter (TWTR -2.55%) and Apple (AAPL 1.30%), and others are forecast to gain ground.

Putting it all together
Given the massive opportunities in mobile advertising; the increasing popularity of Facebook, WhatsApp, and Instagram; a 31-year old wunderkind leading the company (and owning a significant portion of it); and the company's relatively fair price tag in light of these factors -- I'll be adding more shares of the company to my family's retirement portfolio as soon as Motley Fool trading rules allow.