Please ensure Javascript is enabled for purposes of website accessibility
Log In Help Join The Motley Fool
Free Article Join Over 1 Million Premium Members And Get More In-Depth Stock Guidance and Research
By Reuben Gregg Brewer – Mar 15, 2016 at 9:45AM

Deere's green and yellow tractors are iconic, but there's more to know about the heavy-equipment maker than its status in American lore

Deere & Company (NYSE: DE) , the maker of those iconic green and yellow tractors like the ones above, has a place in American culture right up there with the big yellow construction equipment maker Caterpillar (NYSE: CAT). If you're thinking about investing in Deere, however, you need to know a few things about how the company makes a buck.

John Deere
The farm equipment John Deere sells is the driving force behind Deere's financial results. Agricultural equipment sales account for roughly 75% of the company's equipment sales (about 65% of total revenues). Still, the remaining 25% of equipment sales (around 20% of the top line) goes into the construction and forestry industries. This is noteworthy because it pits the company up against some stiff competition, like Caterpillar, and shows that Deere isn't just a tractor company.

The company also has a large finance arm. This division makes loans to support the sale of Deere products, so you shouldn't have to worry about some finance black hole that breaks the company apart like what happened to General Electric during and after the 2007 to 2009 financial-led recession. But this is a big and important business for the company. It accounts for about 10% of total revenues ("other" makes up the balance, if you are trying to get to 100%).

In reality, the impact of the finance arm is much bigger than that 10%. Deere sells giant, expensive equipment. If Deere didn't provide financing for what it sells, it would struggle to sell equipment. But the big picture here is that Deere is really in three different businesses: farm equipment, construction/forestry equipment, and finance. And each are pretty important to the top and bottom lines.

Wax and wane
Deere's sales will ebb and flow with broader economic conditions, and the specific trends within its core markets. The biggest impact, obviously, will be from the farm side of the business.

But Deere operates around the world, so it isn't just the U.S. farm belt that you'll need to watch. About 35% of the company's equipment sales come from outside the U.S. and Canadian markets. In other words, global growth and demand is an important factor to watch, too. 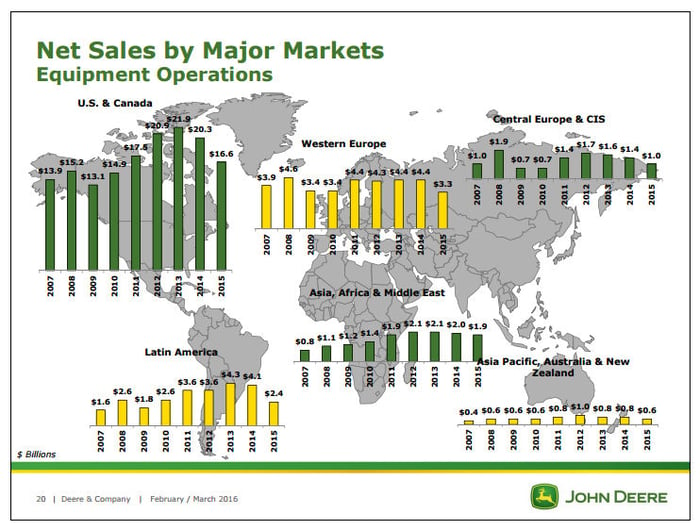 The company's key end market, farms, often sell commodities into global markets, like wheat. So even if the U.S. is doing well economically, it's possible for farm commodities to be weak. In that case, Deere's customers won't have as much money to spend on new equipment. Deere's business is cyclical, and may or may not move along with the U.S. market.

Right now is a pretty rough time to sell big machines. Deere's equipment sales, for example, were down 22% in 2015. And the first quarter of 2016 didn't change that downtrend. But as you'd expect, Deere isn't alone in this. Cat's equipment revenues fell 15% last year, with the company projecting further declines for 2016.

Costly businesses
But here's the thing: Building big tractors and the like is an expensive endeavor. For example, although equipment sales were down 22% at Deere last year, earnings were down slightly more than 40%. The same thing happened with Cat, which saw earnings decline nearly 30% on a 15% decline in equipment revenue.

There's obviously other factors involved, like the mix of equipment that's getting sold, but the big picture here is that Deere and Cat have to support operations with lots of fixed costs. The more that gets sold, the more profitable they'll be. On the flip side, however, slowing sales can really start to hurt the bottom line pretty quickly.

Don't forget the impact of changes in the commodities that Deere uses, either. Steel, for example, is a key building block when it comes to tractors and the like. Commodities across the globe are fairly cheap right now, so this isn't too much of an issue. But if iron ore prices were to head higher, it would have a direct impact on Deere's profitability.

There's another commodity that's worth paying attention to, as well: dollars. That's because Deere translates foreign sales back into U.S. dollars. With 35% of its sales overseas, this isn't an insignificant issue. The strong dollar right now is a notable headwind to watch. But currencies wax and wane, and this headwind could just as easily turn into a positive in the future. So pay attention, but don't get overly caught up on this one.

A far cry from a horse and plow. Source: Deere & Co.

Technology?
There's one more issue you need to get a handle on when looking at Deere, and that's technology. Farm equipment is increasingly complex, and like everything else in life, computerized. Turning tractors into high-tech farm equipment is, and has to be, a key priority for Deere. That includes everything from full-on, self-driving tractors to the less-fanciful integration of GPS positioning systems for humans to use to increase the precision of their planting efforts.

The issue is that Deere has to keep up with the changing face of technology if it wants to maintain its position as a leading equipment provider. You shouldn't think of Deere as a low-tech machinery maker; it's increasingly going high tech because farms are increasingly high tech.

Who knew!
Next time you drive by a farm and see one of Deere's tractors, don't just bask in the thought of an American icon. Deere is much more complex than that. That means investing in Deere requires understanding the types of products the company sells, the global markets it serves, the costs it faces, and the future it has to prepare for.

Reuben Brewer has no position in any stocks mentioned. The Motley Fool owns shares of General Electric Company. The Motley Fool is short Deere & Company. We Fools may not all hold the same opinions, but we all believe that considering a diverse range of insights makes us better investors. The Motley Fool has a disclosure policy.