Sluggish profit and a ratcheting down of its financial forecast for this year are weighing on the company's shares.

CEO Michael Pearson has his work cut out for him.

What: After reporting disappointing financial results for the fourth quarter and issuing guidance that's shy of industry watchers' expectations, shares in Valeant Pharmaceuticals (BHC 2.22%) was tumbling 47.7% at 12:00 p.m. ET today.

So what: The previously highly acquisitive drugmaker has been under fire in the past year for a business model that includes acquiring existing therapies in order to increase their price.

The company's fourth-quarter results include sales of $2.79 billion, up 22.4% from last year, and adjusted earnings per share of $2.50, which was $0.11 shy of what investors had anticipated.

Valeant Pharmaceuticals' gastrointestinal product sales fell shy of the company's previous guidance in December because of wholesaler inventory reductions resulting from its recently announced distribution agreement with Walgreen Boots Alliance. As part of that deal, Valeant will directly distribute many of its drugs on consignment with Walgreen Boots retailers.

Management also noted that the performance of its ophthalmology and women's health business is tracking south of targets and that its business in Western Europe has softened.

Now what: It's been a rough go for investors since Valeant's business went under the microscope last fall. Congressional scrutiny of its acquire-and-reprice strategy, improper accounting associated with its specialty pharmacy, and an illness sidelining its CEO contributed to shares falling 85% since last July. 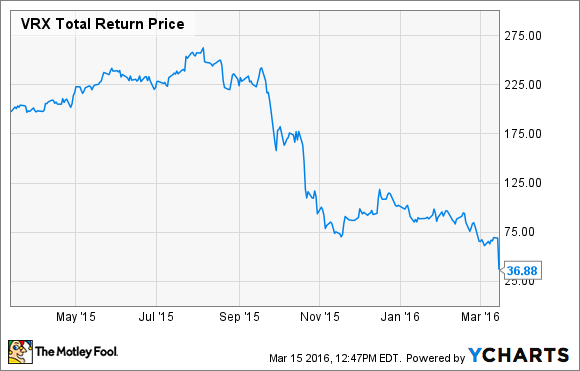 Clearly, management has a lot of work to do to restore investor confidence.

Its acquisition strategy has given it valuable products, but it has also saddled the company with debt. A review of its accounting practices remains ongoing, and as a result, there's still a lot of uncertainty. Management's reducing its forecast also raises doubt that the C-suite has its arms around the challenges it's facing.

Nevertheless, Valeant Pharmaceuticals is profitable, and the company's plans to cut costs and pay down debt could make it more profitable in the future. Of course, that assumes it can overcome the hurdles it's facing and stabilize sales. Unfortunately, there's no telling when that will happen.