When Eaton Corp. (NYSE:ETN) reported fourth-quarter earnings, the news was, well, not great. But it was hardly bad, since even during an economic soft patch the industrial giant managed to earn $1.15 a share. That was down year over year, however, and it helps explain why management wants you to understand the following five things.

1. This is a tough patch
Eaton has a focus on power management, an increasingly important niche, but it doesn't change the fact that it's an industrial company. And when the world is slowing down, Eaton is going to feel the pinch. That's why the $1.15 it earned in the fourth quarter was both impressive and a sign of the times. The company earned $1.23 in the fourth quarter of 2014.

So after listing a few positives from the quarterly results, CEO Sandy Cutler said, "We think a very strong quarter in the midst of pretty choppy end markets, and I think it concludes the year on strong basis." Making money in a bad market is a sign of Eaton's strength, to be sure. But it's the choppy end markets that are going to define 2016, no matter how good or bad 2015 was.

2. The outlook is dim
When the company started 2015, it was expecting organic revenue growth of 3% to 4%. It trimmed that expectation as the year progressed, with the end number coming in at a 2% decline. That's a pretty big drop-off, and the prognosis hasn't gotten any better.

For example, in October, Eaton was expecting organic sales to decline around 1% to 2% in 2016. But, Cutler updated, "We think a better expectation tuned up for that doubt is that our organic revenues would decline on the order of 2% to 4%." The doubt he's talking about comes about from discussions with customers around the world that, clearly, didn't go as well as hoped. To be fair, however, this isn't unique. For example, Emerson Electric (NYSE:EMR) thinks its organic sales could fall as much as 5%.

3. This is the biggest trouble spot
Although there was weakness throughout the company in the fourth quarter and the full year, the biggest trouble spot remains hydraulics. Organic sales were down a whopping 12% in that division to end out 2015, an acceleration from the 10% drop in the third quarter. The good news is that hydraulics accounts for only about 10% of the top line.

There's really no single issue here to fix, however. In fact, the CEO described it as a worldwide story: "I mean, if you go around, whether it would be the Americas or Asia-Pacific, the numbers are all negative, and they're negative also when we look at both the distributor and the OEM cuts." This division sells to the farm, construction, and mining sectors, among others. But all three of those sectors are fairly weak right now and have been for a while. You'll want to keep an eye on this segment, but don't expect big changes yet. 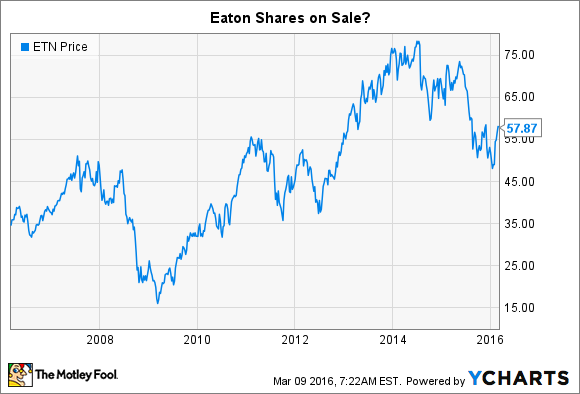 4. We're still not passing "Go"
One of the interesting things about Eaton is that it bought Cooper Industries at the end of 2012. That was the company's largest deal ever and a transformational event. Because of the size of the deal, Eaton has taken its time to integrate the business. But, according to Cutler, "We are not able to do tax-free spins until after the five-year anniversary." In other words, unless Eaton wants to sell its hydraulics business, likely taking a tax hit, it's stuck with it until late 2017.

The flip side is that the Cooper integration process is pretty much complete. So Eaton could start getting more acquisitive if it wanted. But it doesn't appear that this is in the cards, either. As a diversified industrial giant, Eaton makes frequent small, bolt-on deals. But the company has gone from a plan to use about 50% of its free cash for acquisitions and 50% for stock buybacks to "tilting it toward buying back more of our shares." The reason? Eaton thinks its shares are cheap today. So look for the industrial giant to buy back as much as 2.5% of its float each year for the next couple of years. But don't expect any big deals, at this point, anyway. That said, those buybacks should help support the bottom line through this downturn.

5. We're upping our game
That brings up the last thing management wants you to know, even though it's been a highlight for a few quarters now: restructuring. Eaton has been working to "right-size" its business so that it can better compete in the current market. To give you an example, although the hydraulics business has been suffering, operating margins fell only 100 basis points year over year. Compare that with the 18% revenue decline in the segment, and you can see there are things happening behind the scenes.

That's why Cutler noted, "I think our [hydraulics] team has done a really terrific job in terms of really containing cost and driving structural change." But this is taking place throughout the company, and at an increasing rate. For example, the company spent $129 million in 2015 to generate ongoing cost savings of around $85 million a year. The numbers, however, are more leveraged in 2016 and 2017, where it expects to spend a combined $270 million. Indeed, after this three-year restructuring program is compete, Eaton expects to have spent about $400 million to generate ongoing savings of around $418 million or so. Watch the updates here to make sure it stays on track.

Some good in the bad
Eaton is facing a difficult market, and there's only so much it can do about that on the top line. This year is likely to be pretty weak. But that doesn't mean management is sitting still. It's adjusting the business to better compete in the markets as they exist, and it's using the downturn to buy its stock back at what the company believes are compelling prices. So the news is kind of mixed, with top- and bottom-line weakness, but strong operations. With a yield over 4% and continued robust profitability (it earned over $4.20 a share in a bad market last year), conservative investors with long time horizons might just be willing to wait for better days.