Wal-Mart says the young adults are more likely to shop at the discount giant than the average American. 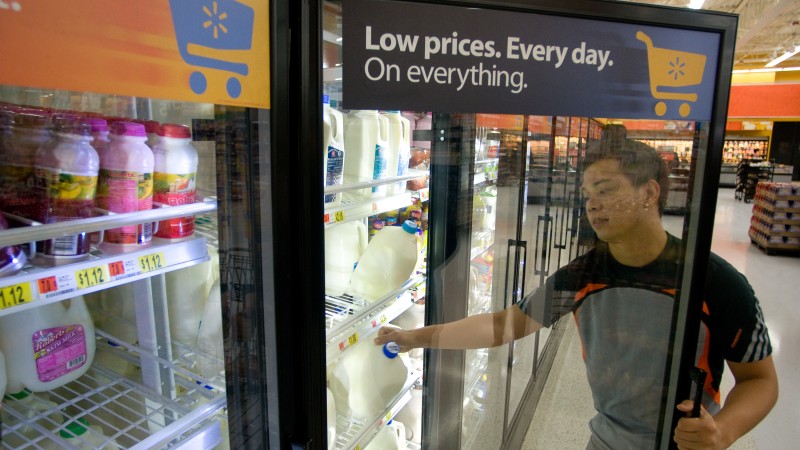 What happened? Wal-Mart Stores, (WMT 0.62%) says it is making strides with a surprising customer base. The world's largest retailer is becoming more popular with millennials, according to information the company has gathered.

Two-thirds of Americans between the ages of 20 and 35 have shopped at a Wal-Mart in the last month, and they're more likely to shop at Wal-Mart than the average American, Wal-Mart Chief Merchant Stephen Bratspies told Wall Street last week at the Raymond James conference. Company research also shows that it's gained 4.5 percentage points of market share among mothers in that age group. As the big-box chain looks to gain traction in its turnaround, these results show that some of its strategies may be yielding results.

Does it matter? Millennials are a sought-after demographic for retailers for a number of reasons. As the youngest adult generation, they have more shopping years ahead of them than any other demographic, so their loyalty to Wal-Mart has the greatest value to the company. They are also entering their prime spending years as they buy houses and form families, meaning their outlays at Wal-Mart are likely to increase.

Finally, millennials are the most tech-savvy generation, so Wal-Mart's ability to grow market share is a demonstration that it's fending off Amazon.com in this key demographic. The retail giant's e-commerce sales growth have slowed in recent quarters, but it continues to improve its online platform, adding in-store pick-up for online orders to all stores in the continental U.S, and slowly expanding its grocery pick-up. Wal-Mart now has the third-most-commonly used mobile app of any retailer, and building loyalty among millennials should help drive growth in its e-commerce division.

Though Wal-Mart's stock has risen this year, the company's recent results have been ugly as it's revised its outlook lower in each of its last two quarterly reports. Considering that negative momentum, the company would desperately like some positive news to show that its turnaround strategy is working. Gaining favor among millennials should eventually yield such results on the bottom line.