Please ensure Javascript is enabled for purposes of website accessibility
Log In Help Join The Motley Fool
Free Article Join Over 1 Million Premium Members And Get More In-Depth Stock Guidance and Research
By Adam Galas - Mar 16, 2016 at 10:00AM

Despite the chaos of the energy markets this high-yielding MLP is posting impressive growth. Find out how and why 2016 is likely to prove another good year for dividend investors.

Wall Street hasn't been kind to midstream MLPs such as KNOT Offshore Partners (KNOP -1.83%) since the oil crash began around 20 months ago. Based on its performance over the last year, as well as its 12+% yield, you'd think that the MLP's business model had dubious growth prospects and a highly risky payout. 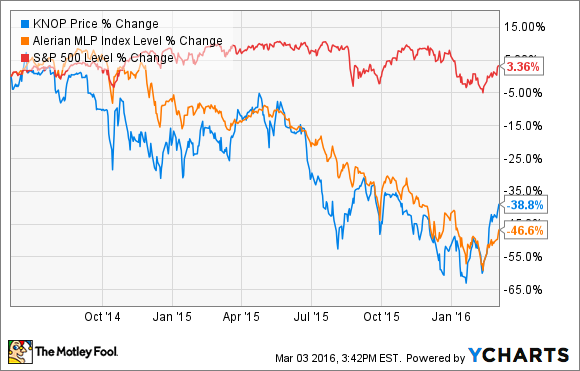 Yet 2015's results tell a very different tale. Here's why KNOT Offshore's solid results last year proves the market is most likely wrong about this shuttle tanker MLP and why 2016 is likely to prove another solid year for dividend lovers.

As you can see KNOT Offshore Partners had a very good 2015. This was courtesy of its ongoing fleet expansion, such as its $115 million October 15th acquisition of the Ingrid Knutsen, which brings its tanker count to 10. In addition, KNOT Offshore's utilization rate remained a stellar 99.9% in the fourth quarter due to its focus on long-term, fixed-fee contracts for each of its ships with large integrated oil giants such as Statoil (EQNR 3.57%) and Royal Dutch Shell (RDS.A).

In fact, as of the end of 2015 its average remaining contract length stands at 5.6 years, which gives management strong cash flow visibility with which to plan its forward distributions.

That being said the two contract extensions completed in Q4, one with BG Group, now owned by Shell, and the other with Statoil, were only for two years. These shorter-term contracts are likely due to the oil industry's concerns over limited crude oil price visibility over the next few years.

On the plus side the Statoil extension included both a two year option that could allow it to remain in effect through 2019 and was for the same daily charter rate. It also included an annual 1% rate increase, showing that KNOT Offshore's shuttle tankers represent a niche market for which solid demand is likely to keep day rates from tumbling along with oil prices.

Wall Street is currently valuing KNOT Offshore Partners as if it had very little growth prospects and an unsustainable distribution. Yet as you can see, the MLP covered it's full 2015 year payout by a wide margin. Also the fourth quarter's coverage ratio was slightly higher than both 2015's and 2014's full year ratios.

Given KNOT Offshore's highly stable cash flow, well secured by long-term, fixed-fee contracts with some of the world's most stable oil companies, what explains the sky-high yield and extremely low valuation? The answer probably lies with analysts' extremely bearish growth forecasts which I believe to be based on the short-term risks to the MLP's growth plans.

Risks to watch going forward
The midstream MLP business model is based on a partnership paying out the vast majority of distributable cash flow to investors and financing growth through cheap debt and equity.

In KNOT Offshore's case that growth is likely to come from the options it has to purchase five additional shuttle tankers from its sponsor. This potential 50% increase in fleet size would greatly increase its DCF and, if the capital to buy these ships is cheap enough, generate sufficient growth in DCF per unit.

However, with KNOT Offshore's unit price having crashed so severely, this creates a conundrum in the short-term. That's because selling new equity at today's low prices means that such acquisitions would likely not be profitable because they could dilute existing investors so much that DCF per unit actually decreases.

Thus KNOT Offshore's only growth avenue is to buy those tankers by taking on additional debt. However, with $672 million in total debt already outstanding the MLP's leverage ratio (debt/EBITDA) currently stands at 6.0. While that ratio is far lower than the shipping industry's average of 9.0 KNOT Offshore probably shouldn't use all debt to acquire all five drop down candidates.

That's because, while the company has been able to access debt at relatively cheap leves in the past, the cost of additional debt, sufficient to acquire all five potential drop down candidates, may prove too high to make the deals profitable. This indicates that the MLP is best holding off on further tanker purchases until energy prices recover and the market is willing to provide cheaper growth capital.

Bottom line
Don't get me wrong KNOT Offshore Partners isn't without some risks. Its MLP business model means that it remains highly dependent on ongoing access to cheap debt and equity funding. Until oil prices recover enough that Wall Street increases KNOT Offshores' equity valuation, the MLP likely won't be able to grow its fleet or its payout.

That being said, I think that Wall Street is over estimating the short to medium-term risk to KNOT Offshore's distribution. This creates a potentially attractive long-term opportunity that might be just the thing to supercharge long-term dividend investors' diversified portfolios in 2016.