After being decimated over the past year, oil stocks have rallied sharply in recent weeks due to a strong oil price rally, which fueled some short covering. Among the many oil stocks to enjoy a breather is Canadian Natural Resources (CNQ 0.65%), which as the chart below shows, has recovered a lot of ground over the past month: 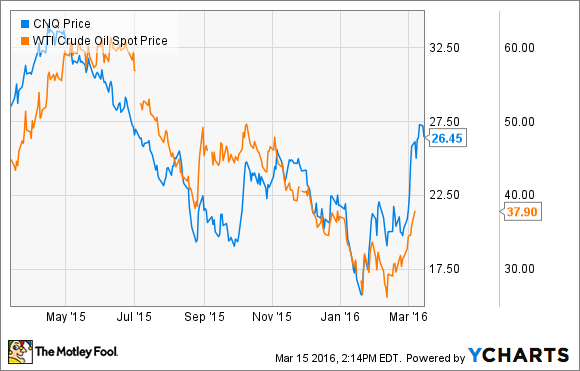 Some investors might see this as their chance to unload their stake in the Canadian oil company before it takes another leg down should oil prices reverse course. However, I think that course of action would be a mistake because the oil company's best days appear to lie ahead, even if oil prices don't budge all that much.

A cash flow gusher is on the horizon
Canadian Natural Resources is right on the cusp of a pretty major transition because it is in the home stretch of completing two major expansion phases of its Horizon oil sands project. The first phase, 2B, is expected to be finished by the end of this year and deliver 45,000 barrels of production per day once it has ramped up. Then, in the fourth-quarter of 2017 Phase 3 will deliver first oil, which is an even larger phase at 80,000 barrels per day of production.

Completing these two major projects is important for two reasons. First, these expansion projects currently consume a lot of capital with Canadian Natural Resources spending $2 billion of its $3.5 billion to $3.9 billion 2016 capex budget on this expansion. It's a number that will be cut in half next year, before going away in 2018.

In addition to the significant spending reduction, the company will see a sharp increase in cash flow as a result of the production from these two phases. The combination of lower capex spending and increased cash flow is expected to yield $865 million in free cash flow next year at a $43 oil price with that number ballooning to $2.1 billion in 2018 at a $45.50 oil price.

Lots of options to improve returns
That excess cash flow gives the company a lot of options, including increasing the dividend, buying back stock, paying down debt, making acquisitions, or investing to grow production. Given the company's own history, a good portion of that cash will likely be returned back to shareholders. As the slide below shows, after Phase 1 of Horizon was completed the company really ramped up shareholder distributions: 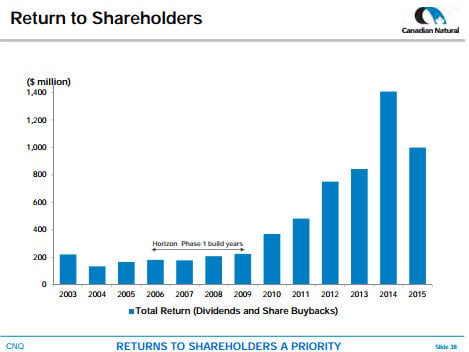 That said, while increased shareholder returns will likely be the primary destination of this increased cash flow, the company will also likely use its growing cash flow to bolster its asset base, which is something peer Suncor Energy (SU) has been doing during the downturn. Over the past year Suncor Energy has acquired rival Canadian Oil Sands and increased its stake in its Fort Hills oil sands project, which will bolster its cash flow and production in both the short and long-term.

Canadian Natural Resources could follow a similar path by seeking to acquire a smaller rival or buying assets. It has a long history of making acquisitions, with its last major acquisition being Devon Energy's (DVN 1.02%) conventional Canadian assets in 2014 for $3.125 billion. At that time CEO Steve Laut said that the assets acquired from Devon Energy,

... Fits our strategy of opportunistically adding to our existing core areas, where we can provide immediate value, with the opportunity to add value in the future. The acquired assets are largely operated, as are the owned facilities and infrastructure; and are a very good fit with Canadian Natural's existing assets and infrastructure.

Similar opportunistic acquisitions to bolster the company's position in key plays is quite likely once the cash flow from Horizon starts pouring in.

In addition to that it has substantial future expansion capacity at Horizon that could be developed. The company could potentially grow its production up to 500,000 barrels per day, which would be double its capacity once Phase 3 comes online. Beyond Horizon it has other assets that could be developed, including an oil find offshore Cote d'Ivoire that was discovered in early 2014 as well as significant unconventional assets in the Montney and Deep Basin of Canada. Needless to say, the company isn't short on compelling opportunities to reinvest that excess cash flow to drive future growth.

Investor takeaway
Bottom line, now is not the time to sell Canadian Natural Resources stock. Just over the horizon is a gusher of cash flow once the company completes its expansion phases at Horizon. That cash flow opens the door to increased shareholder returns as well as new growth opportunities, which is something investors won't want to miss.

Matt DiLallo has no position in any stocks mentioned. The Motley Fool owns shares of Devon Energy. We Fools may not all hold the same opinions, but we all believe that considering a diverse range of insights makes us better investors. The Motley Fool has a disclosure policy.