It's been a horrible 12 months for shares of the professional social network, but a number of signs demonstrate investors might do well to further examine LinkedIn's shares at their current prices.

In the highly volatile world of tech investing, fortunes can disappear as quickly as they are built.

The annals of growth investing are replete with examples of flash-in-the-pan names that soared only to subsequently sink from the weight of the optimism that helped fuel their rise.

Many names that suffer this well-worn fate never regain their former swagger. However, down but far from out professional social network LinkedIn (LNKD.DL) has all the makings of a phoenix primed to soar once more from its ashes.

LinkedIn's fall from grace
Looking at LinkedIn, the most striking thing is the massive sell-off that took place over the last 12-months, particularly after the company's disappointing Q4 2015 earnings report in early February. 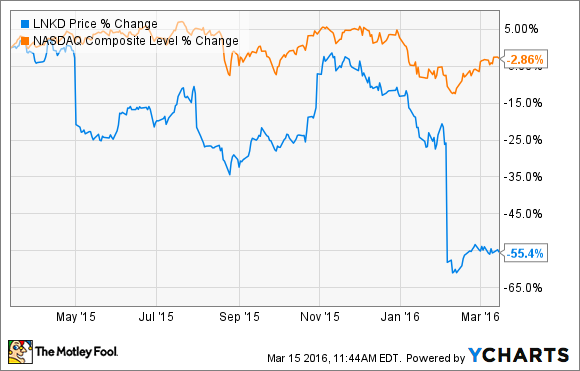 In fact, LinkedIn's 44% single-day decline on February 5th singlehandedly reversed its all-time trading performance from outperforming the Nasdaq Composite index to underperforming the index during its tenure as a public company.

Though this may sound like short-termism, LinkedIn violated a cardinal rule for growth stocks. The firm partially missed analyst estimates and issued FY 2016 guidance well below analysts' mean estimates. Specifically, LinkedIn said it anticipates earnings between $3.05 and $3.20 on a per share basis, with revenues coming in between $3.6 billion and $3.65 billion. Analysts had expected EPS of $3.65 on sales of $3.9 billion.

Understandably, alarm bells sounded among many growth investors who focused on the news of slowing growth for what has historically been a richly valued stock. Even relatively new growth investors should be able to see how this one-two punch of negativity could trigger a massive sell-off in LinkedIn stock. However, to the benefit of investors here and now, its newfound trading levels also make LinkedIn one of the more interesting growth stocks on the market today.

Don't call it a comeback
While not tantalizingly cheap, LinkedIn's stock arguably presents one of the most compelling opportunities in all of tech today. The company should finally flip to full-time profitability in its current FY 2016, though its long history of GAAP unprofitability despite outsized growth is certainly worth noting. Thankfully, the firm forced through several important product improvements in 2015 that should help support its long-term profitability going forward.

Last year, LinkedIn refocused its long-term strategy "around the principle of creating greater value for our members and our customers, connecting them to opportunity."

In order to do this, the company recommitted to helping members "stay connected and informed, advance their careers, and work smarter." To further this aim, LinkedIn initiated a number of key business and product changes last year that should bear fruit in 2016 and beyond. Most visibly, it revamped the company's core mobile app.

For its Talent Solutions segment, LinkedIn overhauled its leading Recruiter product for the first time in 7 years. Hiring and recruiter tools still account for the overwhelming majority of sales in the firm's largest segment, which increased 45% during the company's FY 2015. Marketing Solutions continued to dive deeper into Sponsored Updates, which is one of the areas of its business the company is most bullish. Point of fact, Sponsored Updates grew to represent over 50% of Marketing Solution's sales for the first time in 2015. Lastly, the company's smallest revenue contributor-Premium Subscriptions-was still able to muster 22% annual growth with revenue surpassing $500 million as well. Broadly speaking, LinkedIn's executive team seems focused and committed to improving service for both users and those seeking to tap into its growing user base of over 100 million monthly active users, or MAUs.

Though significantly cheaper, LinkedIn's shares are perhaps best described as fairly valued, or even slightly overvalued, rather than demonstrably cheap. LinkedIn's stock currently trades at 27x its forward earnings, versus an estimated multiple of 17x for the Nasdaq 100. However, as a company that appears well-suited to dominate the future of online professional networking, with multiple monetization points to boot, LinkedIn's ability to continue to grow into its valuation and beyond seems like a reasonable expectation at current prices. So while the market has taken a less bullish stance on this longtime growth darling over the past twelve months, there's a legitimate case to be made that LinkedIn's shares now stand as one of more attractive opportunities for long-term tech investors today.

Andrew Tonner has no position in any stocks mentioned. The Motley Fool owns shares of and recommends LinkedIn. We Fools may not all hold the same opinions, but we all believe that considering a diverse range of insights makes us better investors. The Motley Fool has a disclosure policy.