Is the surge likely to continue?

It's been a difficult first quarter for the industrial sector, with China's growth slowing, talk of an industrial recession in the U.S., and the European Central Bank cutting interest rates to stimulate Europe's economy. Yet somehow, industrial supply companies MSC Industrial Direct Co. (MSM 1.47%), Fastenal Company (FAST 0.04%), and W.W. Grainger Inc. (GWW -0.71%) are up an average 16% in 2016. What's going on, and can it continue? 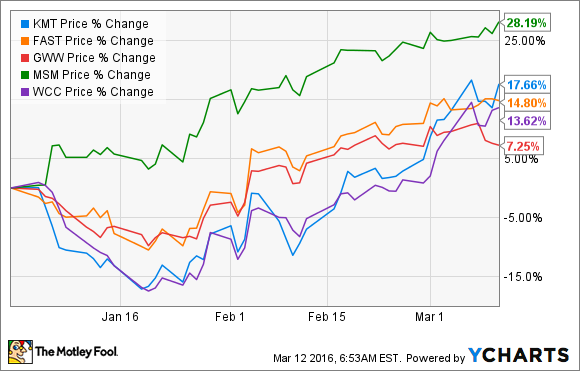 Industrial conditions worsening
There is little doubt that conditions grew worse during the fourth quarter, and most companies have been cautious with their guidance in their most recent reports -- not usually a good sign. For example, Kennametal Inc. (KMT 0.54%), a major product supplier to MSC Industrial and Fastenal, referred to a U.S. industrial recession on the company's earnings call in February, when CFO Jan Kees Van Gaalen outlined a cut in full-year guidance (Kennametal's fiscal year ends in July):

Regular Fool readers already know how conditions remained soft at MSC Industrial in the fourth quarter, and that Wesco International (WCC -2.12%) saw deterioration in core sales growth in all of its key end markets. Meanwhile Fastenal's fastener sales -- around 40% of its total business and the key to its industrial business -- declined 6.2% in the fourth quarter.

U.S. industrial sector bottoming
However, markets tend to anticipate economic conditions, and the appreciation of the industrial supply sector -- usually seen as highly cyclical -- is an indication the market is pricing in some sort of recovery in the second half. But is there any evidence for this?

I have three pieces of evidence:

A look at U.S. industrial and manufacturing production suggests, albeit tenuously, that a trough was formed in December. Recall that the company results discussed above encompassed this period, so relatively better conditions could show up in future earnings figures.

Hard macroeconomic data is also backed up by the ISM survey data. As you can see below, manufacturing has picked up a bit in 2016 (index readings above 50 indicate expansion) and the non-manufacturing index remains in positive territory. 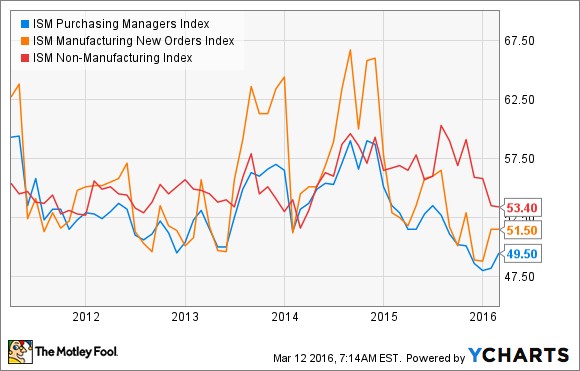 Meanwhile, on MSC Industrial's earnings call, CFO Rustom Jilla suggested that average daily sales would be down 4% in January and February -- not fantastic, but better than the 5.9% decline reported in November.

Fastenal always gives great monthly data. Here is a chart of daily sales growth for its stores open more than five years (it's better to use mature stores to analyze sales data). 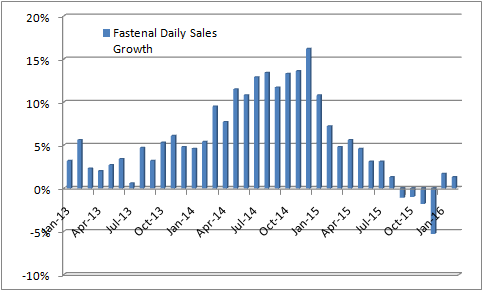 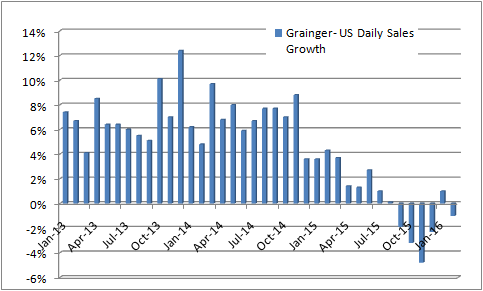 For investors looking to play this theme and jump in ahead of the next move upward in a sector, it's probably a good idea to focus on broader industrial stocks with a heavy U.S. focus. The industrial supply companies are always early in the cycle, and their stock price movements and sales trends could be signalling a better second half for the industrial sector.