Who has the upper hand among the mid-western pharmaceutical heavyweights.

Pharmaceutical heavyweights AbbVie (ABBV 1.26%) and Eli Lilly (LLY 1.20%) are both headquartered in the American Midwest, but their similarities stop there. Spun off from Abbott Laboratories in 2013, from a certain point of view AbbVie is an infant. Eli Lilly's primary focus has been pharmaceuticals since the 19th century. 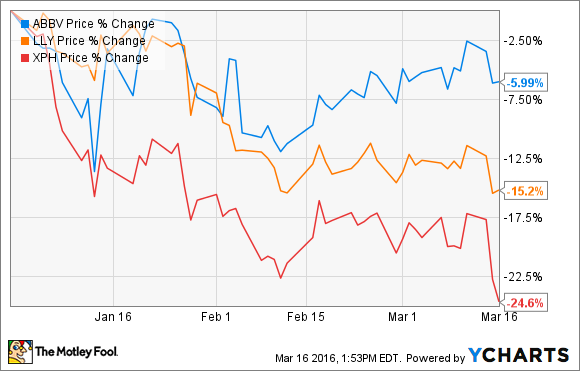 So far this year Lilly has been dragged down with the rest of the S&P Pharmaceuticals ETF (XPH 1.02%), of which AbbVie is not a component. It's lack of membership in the beaten up ETF could partially account for its relative buoyancy among its big pharma peers, but that's hardly reason enough to make an investment decision.

Let's look at some more differences between the two companies to see which is the better buy.

Product focus
AbbVie has steadily increased revenue since its inception. Eli Lilly on the other hand has done just the opposite. A closer look at the forces behind these top-line rises and falls will give us clues to whether the trends will continue. 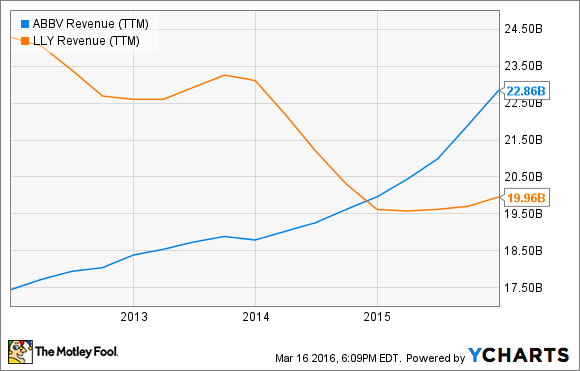 AbbVie's sales of the extremely popular anti-inflammatory, Humira grew 12% last year to a whopping $14 billion. Unfortunately Humira alone was responsible for more than 61% of Abbvie's total. It's only other blockbuster, hepatitis C virus combination Viekira Pak, contributed $1.6 billion in its first full year of sales. Unfortunately, recent entry of Merck's Daklinza, along with Gilead Sciences' dominate position in the hepatitis C space may lead to a sophomore slump.

Abbvie's composition of matter patents for Humira expire this December in the U.S., and late 2018 in Europe. While composition of matter patents are basically bulletproof, additional patents related to methods of use, formulation, education programs, and so on, are sometimes vulnerable. AbbVie insists its additional U.S. patents for Humira expire no earlier than 2022.

Legal staff from heavyweights Amgen, Merck, and Novartis, just to name a few, are working around the clock to find and exploit any vulnerabilities, and begin marketing biosimilar versions of Humira themselves. This means the exact date AbbVie begins suffering competition for Humira is questionable.

Also in question is just how much pricing pressure a Humira biosimilar would apply to its reference product. Based on what we've seen in Europe, where biosimilars have been available for a decade now, they generally enter the market at a 20% to 30% discount to their reference products, unlike small-molecule generics which often begin selling at 80%+ discounts.

In contrast to AbbVie, Eli Lilly's revenue stream is far more diverse, but less vibrant. Six separate products contributed 5% or more to Lilly's annual revenue of $19.96 billion last year. Among its six top sellers, just three produced anemic growth between 1% and 2%, and the others fell significantly. For example, sales of former top product Cymbalta, which lost U.S. exclusivity in 2013, declined 36% to just over $1 billion last year.

Eli Lilly's exclusivity woes don't end with Cymbalta. Key U.S. patents on Cialis, Alimta, and Strattera, -- the combined U.S. sales of which made up 15% of 2015 global sales -- all expire next year.

Pipeline focus
Although I'd say AbbVie's existing product line is looking stronger than Lilly's, it's drugs in development that make investing in pharmaceuticals exciting. Approved late last year, Lilly's Portrazza for treatment of lung cancer in combination with two forms of chemotherapy might be a dud. In trials leading to its approval, adding Portrazza to the standard chemo regimen extended median overall survival from 9.9 months to 11.5 months. At a list price of $11,430 per month, it may struggle to gain a lot of traction.

Perhaps Lilly's leading clinical stage candidate is Alzheimer's hopeful solanezumab. After its first phase 3 failure, a redesigned trial involving patients in earlier stages of the disease may make the difference. A more recent change from two primary goals to just one should improve its chances even further. Although the odds of success are long, any proof it can treat the underlying cause of Alzheimer's disease would make this a near instant blockbuster.

While Lilly's best clinical asset is a hail mary, it's hard to choose which of AbbVie's late stage programs to be most excited about. It looks like AbbVie's $21 billion gamble on Pharmacyclics, and rights to Imbruvica, will pay off. It recently became the first FDA-approved, chemo-free, first-line treatment option for patients with the most common form of leukemia. With 15,000 new patients each year, and additional label expansions possible, AbbVie's predictions that this drug could eventually boost its top line by $7 billion annually could be an understatement.

Beyond Imbruvica, AbbVie has just as much to be excited about with its first-in-class BCL-2 inhibitor venetoclax, developed in partnership with Roche. The drug has an orphan drug designation. In January AbbVie announced the FDA and EMA have both accepted applications, although for different genetically defined groups of leukemia patients. The FDA granted venetoclax a priority review so it could potentially reach pharmacy shelves about halfway through the year.

In the numbers
Clearly AbbVie has Eli Lilly beat when it comes to current and upcoming products, but what do the numbers say?

Let's start with distributing profits: Eli Lilly has paid dividends for decades, but it remained frozen for several years, until it began raising it again recently. AbbVie obviously can't claim a long history of increasing dividends, but when it split from Abbott Laboratories it also split the distribution which, when combined, continued to grow at an impressive pace, while Lilly's was still frozen. 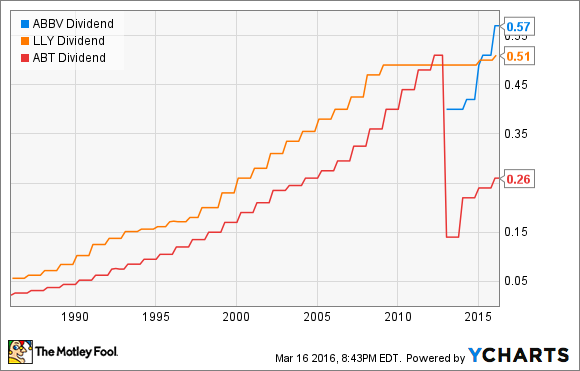 If that's not enough convincing, at recent prices Lilly's 2.9% dividend yield is enticing, but AbbVie's 4.1% yield is almost irresistible. AbbVie's yield is not only higher, but it is using a smaller percentage of its profits to make those payments.

What about valuations, you say? Lilly's current price over 2016 consensus earnings-per-share estimates, or forward P/E ratio, seems awfully high for a company with little to look forward to. 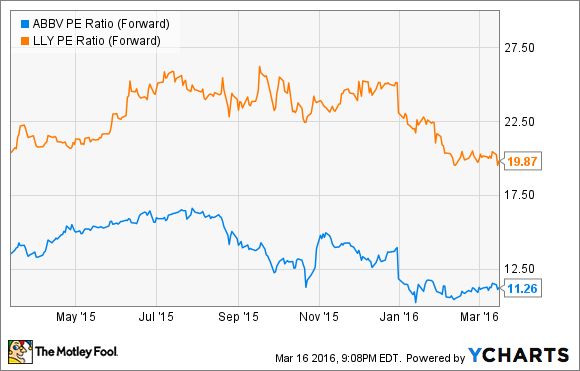 AbbVie's forward P/E ratio is extremely pessimistic. I hardly think Humira losses will occur at the rate its valuation suggests. Recent advances in leukemia and other blood cancers with venetoclax and Imbruvica should more than offset Humira losses, making AbbVie the better buy.