Back in Aug. 2015, Intel (INTC -1.11%) introduced two desktop processors based on its 14-nanometer Skylake architecture. These chips were in very short supply for quite some time (the major online retailers didn't even list them on their websites until well after Intel's announcement), which led to artificially inflated prices.

Indeed, at one point, somebody looking to purchase a Core i7-6700K -- which Intel recommends be sold for $339 -- would have to pony up more than $400 (and below you can see that I had the "privilege" of paying $420 for one purchased back in December -- the very chip powering the system that I'm typing this column on). 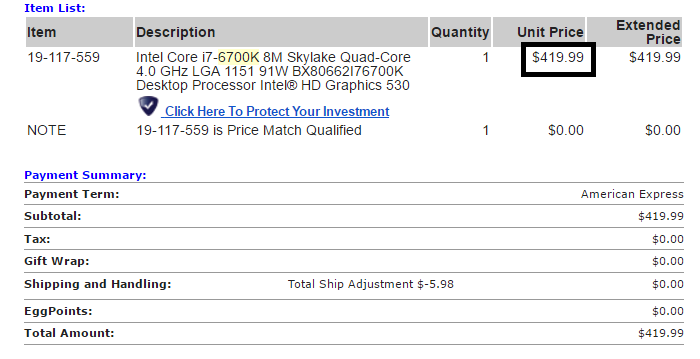 Yes, the price gouging was real.

The reason behind this "price gouging" on the part of online retailers is not hard to understand: Intel's yields on its 14-nanometer process were not where they needed to be, which led to -- in the words of soon-to-be-retired Intel chip manufacturing process chief Bill Holt -- a "tightness in supply."

With Skylake chips seemingly trickling in to the online PC component sellers (I kept close tabs on how often these chips came into and went out of stock at the time), I'm sure resellers had a field day selling these chips at well above the manufacturer's suggested retail price. And because the chips were so good, there were many (including yours truly) willing to pay the premium.

However, Intel apparently managed to get its 14-nanometer yields under control earlier this year as supply of 14-nanometer Skylake (and even the niche Broadwell desktop part with Iris Pro graphics) improved dramatically.

At first, the chips were simply consistently in stock at "inflated" price levels, but over time prices have come down. As of a recent check, Newegg.com apparently has ample supply (I can seemingly buy as many as I'd like; no quantity limits stipulated by the site as had been the case in the past). The chips also now sell for "just" $370.

This is still above manufacturer suggested retail price, but at this point I doubt that any deviation from that value is due to "tight" supply.

Does it make financial sense to go with Skylake now?
Obviously, Skylake is superior to the company's prior generation Haswell processors. Performance-per-clock is better, the chips overclock to about the same frequencies, and the platform that the Skylake chips use is much more feature rich and robust.

The Skylake-based system obviously carries a non-trivial premium over the Haswell based one, but for a system that's going to be in use for a while, the superior platform and added performance of the Skylake chip are probably worth it. $70 over, say, 3-4 years is just not that much extra on an annual basis.

Additionally, it's looking as though Intel's upcoming Kaby Lake CPUs will work in Skylake motherboards, giving people building Skylake systems today a viable upgrade path (though how interesting such an upgrade will be remains to be seen).

Investment takeaway
Intel's strategy to attack the high end of the desktop market is quite interesting. In previous generations, the older generation flagship would "go away" and the newer generation one would take its place. However, following the launch of Skylake, Intel seems to be keeping the older Haswell-based 4790K around as a sort of "middle option" in between the Core i5-6600K and the Core i7-6700K.

Right now, I couldn't be happier with Intel's product stack for PC enthusiasts; it effectively hits the relevant price points and delivers solid relative value at each of them.