Very little is known about electric-car maker Tesla Motors' (NASDAQ: TSLA) upcoming Model 3. But the company closed out the week with one more final detail: the model's logo.

The story of Tesla's Model 3 logo
Anyone following Tesla closely knows the background story on the logo. But if you've never heard it, here's a quick rundown.

After launching a Model S, and announcing a Model X SUV, the company wanted to finish out a certain three-letter word using the vehicle model names. But according to Tesla CEO Elon Musk, Ford, which had the rights to the Model E name, was opposed to the younger American automaker using it.

"Ford's trying to kill sex! So we'll have to think of another name," Tesla Chief Executive Officer Elon Musk told Auto Express in an interview. But Ford didn't stop Tesla from getting a bit creative.

"The new model is going to be called Model 3, we'll have three bars to represent it and it'll be S III X. The three bars resemble the E used in Tesla's logo already."

What we know
Beyond the logo, here's what else the company has said about its Model 3.

"We can confirm it's $35,000 before incentives," Tesla spokeswoman Khobi Brooklyn told Bloomberg in February. "We haven't changed our minds."

It may not use as much aluminum. "I expect there will be very little carry-over [from the Model S]," said Tesla vice president of engineering Chris Porritt in an interview with Autocar. "We've got to be cost-effective. We can't use aluminium for all the [small car's] components." Autocar speculates this means that Model 3 "will use mostly steel."

It will be capable of driving at least 200 miles on a single charge. Tesla has emphasized this about Model 3 on many different occasions.

Model 3 will have "strong performance, like Model S," said Auto Express when paraphrasing comments from Musk that were made during an interview with the magazine. "We want people to fall in love with their car and look forward to driving it," Musk told Auto Express. 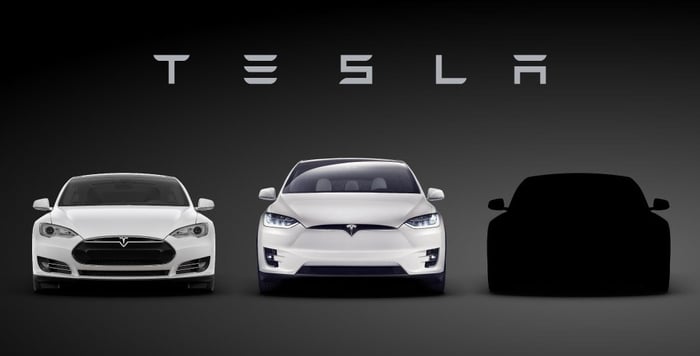 Reservations begin this month. The company plans to begin taking orders for the vehicle in stores at 10:00 a.m. PST on March 31, and it will begin accepting reservations online as soon as Musk takes the stage at 8:30 p.m. PST in Hawthorne, California at an event to unveil the vehicle.

Production and deliveries won't start until late 2017. In line with the timeline for production not to start until more than a year after the unveil, the Model 3 shown on March 31 will only be a working prototype.

Oh -- and Tesla shared one more detail about the vehicle on Friday in addition to the car's official logo. Model 3 will, indeed, have mirrors.