First Solar has wildly outperformed rivals the past two years, but why?

First Solar (FSLR -3.39%) isn't the sexiest name in the solar industry and for most of the past few years it has even been a smaller company than SolarCity (SCTY.DL) and SunEdison (SUNEQ). Even SunPower (SPWR -2.07%) has nearly matched First Solar's market cap at times.

But First Solar is now bigger than SolarCity, SunEdison, and SunPower combined, a shocking turn for everyone involved. How did it get to pole position in the solar industry and where is it going? The answers are surprisingly simple. 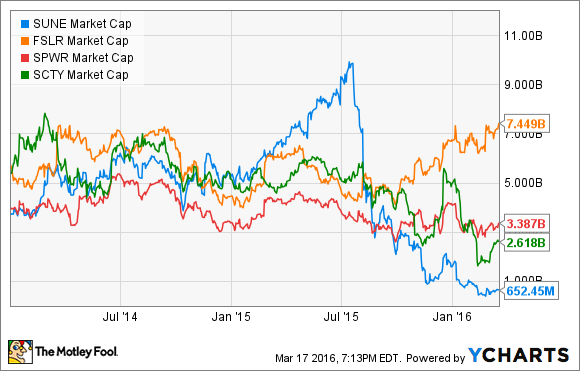 Keep it simple, stupid
More than any other solar company; First Solar knows what it is. It doesn't try to enter new countries it doesn't understand, doesn't try to sell to customers it doesn't know, and hasn't strayed from a conservative financing strategy. First Solar builds large solar plants using its thin-film solar panels and that's it.

Contrast that with SolarCity, who is trying to deal with regulations for rooftop solar in over a dozen states. It is also trying to get into commercial solar, which has been a fiasco over the past year. Now, add energy storage and module manufacturing and the business is getting more complicated by the day.

SunEdison tried to acquire everything from a residential solar company to wind projects, dubbing itself the largest renewable energy company in the world. It's financing got more and more complicated and now it's on the verge of collapse.

Even SunPower, who is the second most steady company of the group, has its fingers in nearly every global solar market and everything from the smallest solar systems to the largest in the world.

First Solar has simply perfected what it does best. Part of the improvement over the past two years has been increasing efficiency in its core thin-film solar modules. But again, that's just improving what the company already knows how to do.

Show me the money
It should be no surprise that First Solar is the most profitable of the companies I've mentioned here. What may be surprising is that's been the case for a long time. 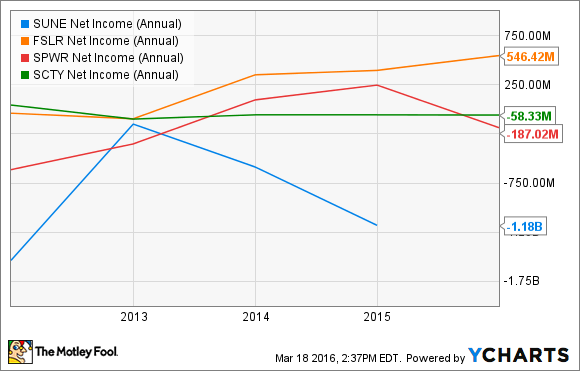 What's changed in solar over the past year is that the market is starting to value net income and cash flow more than ever. SolarCity and SunEdison, in particular, are built on a constant need for new financing and as borrowing costs have gone up and the yieldco model has been discredited, faith that financing will last forever is diminishing.

Where First Solar may get tripped up
The one problem First Solar has going forward is that it's not really a growth company. It's turning on previously shut down manufacturing plants, but production is only expected to grow from 2.5 GW in 2015 to 2.9-3.0 GW in 2016. The company may announce more expansion plans next month, but for now it's content just turning existing production back on.

SunPower, on the other hand, expects to more than quadruple solar panel production between 2015 and 2020. Part of the expansion will be existing high efficiency solar panels, but about half of the growth will be a lower efficiency, low cost, P-Series product. This could give SunPower the capacity to grow in more markets, a luxury First Solar doesn't have.

Steady as it gets
While First Solar doesn't have as many growth options as competitors yet, it does its core business very well. It's also managed to build an incredible balance sheet with $1.8 billion in cash and just $289 million in long-term debt, as of the end of 2015.

With the global solar market expected to nearly double in the next five years, First Solar still has a bright future ahead of it. If the cash flow and low cost installations can lead to a continually improving efficiency and even wider margins I don't see a reason this stock isn't still a great buy. First Solar may not be the first stock you think of when you think about solar, but maybe it should be.