A new product unveiling from Apple, and a few major quarterly earnings announcements are on tap for investors during the next few trading days.

Stocks rallied as the Dow Jones Industrial Average (^DJI 0.00%) and the S&P 500 (^GSPC -0.72%) each rose by more than 1% last week, marking their fifth consecutive week of gains following double-digit 2016 losses in mid-February: 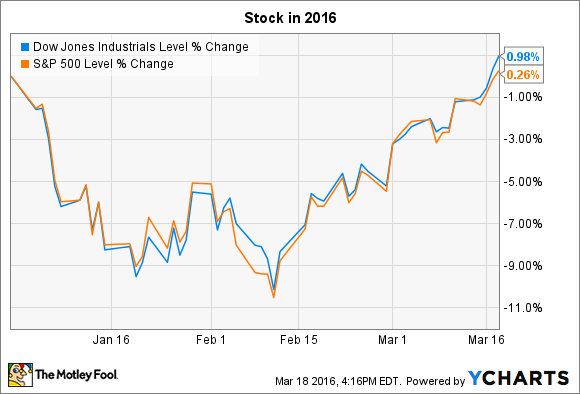 The news that's likely to move stocks this week includes a major product unveiling from Apple (AAPL 0.88%), along with highly anticipated quarterly reports from Nike (NKE -0.86%) and GameStop (GME -3.96%).

Monday, March 21 -- Apple unveils new products
Apple kicks things off with a media event scheduled for 1 p.m. EDT, Monday. The tech titan has been mum on details about the new products or services that it plans to unveil -- other than the puzzling wording of its invitation to journalists: "Let us loop you in."

Still, it's likely that CEO Tim Cook will use the talk to introduce a new four-inch iPhone model, reportedly called the iPhone SE. This device should replace the iPhone 5s, and its lower price and better features may help Apple significantly expand its base of smartphone users.

Other possible introductions include a refreshed iPad lineup that could shorten the upgrade cycle on the tablet to something closer to the iPhone's stellar pace. Unfortunately for tech fans, rumors suggest a new Apple Watch announcement isn't likely this week, and we won't be hearing about an Apple car -- if at all -- for at least a few more years.

Wednesday, March 22 -- Nike's expected profit decline
Dow giant Nike will announce quarterly earnings results after the closing bell on Wednesday, when the apparel titan is expected to post accelerating sales growth. Revenue should climb 9%, according to consensus estimates, as profit improves to $0.49 per share from $0.45 per share a year ago.

Investors will be especially interested in Nike's profit margin after executives warned last quarter that profitability will slip this year due to excess inventory needing to be cleared in the U.S. market. Gross profit was 46% of sales last quarter.

Finally, watch for growth in futures orders, which will give shareholders a strong indication of 2016 demand. These were up a stellar 20% on a currency-neutral basis last quarter, and more double-digit futures gains will confirm that global demand for Nike's apparel and footwear products remains strong.

Thursday, March 24 -- GameStop's video game struggle
Video game publishers may be close to all-time highs, but GameStop isn't participating in the fun. The retailer's shares are down 23% during the last year compared to a 41% spike for Activision Blizzard, and a 20% pop for Electronic Arts.

GameStop's stock suffered as the company failed to meet management's growth expectations last quarter. Improvements in new business lines, like consumer tech, wireless services, and collectables, failed to make up for a slump in its core video game business in the third quarter.

The holiday quarter is GameStop's biggest of the year, and so it can often make or break the retailer's year. CEO Paul Raines and his executive team last forecast healthy Q4 comparable-store sales growth of about 5% that should push full-year profit higher by 8%, to $3.75 per share.

Yet the company's outlook for the coming year will be the key number to watch. Consensus estimates peg 2016 sales growth at 3%, and any significant deviation from that number will probably move the stock this week.

Demitrios Kalogeropoulos owns shares of Activision Blizzard, Apple, and Nike. The Motley Fool owns shares of and recommends Activision Blizzard, Apple, and Nike. Try any of our Foolish newsletter services free for 30 days. We Fools may not all hold the same opinions, but we all believe that considering a diverse range of insights makes us better investors. The Motley Fool has a disclosure policy.