Please ensure Javascript is enabled for purposes of website accessibility
Log In Help Join The Motley Fool
Free Article Join Over 1 Million Premium Members And Get More In-Depth Stock Guidance and Research
By Jay Yao - Mar 21, 2016 at 9:15AM

Teekay may have cut its dividend payout, but its outlook and fundamentals are strong

Teekay Corporation (NYSE: TK) shares have badly lagged the market ever since the company decided to cut its dividend by 90% to focus on growth. Since December, shares of Teekay have fallen almost 50% versus the S&P 500's flat performance and the Energy Select Sector SPDR (ETF)'s 1% advance. 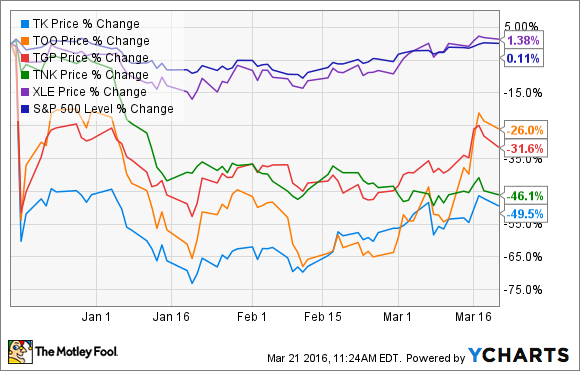 As dire as the stock price suggests, Teekay's quarterly results and management outlook seem to suggest something different. In addition to its fourth quarter results, below are two additional takeaways that Teekay management would like shareholders to know.

Better than expected fourth quarter results
Because its subsidiaries have done well, Teekay's fourth-quarter results were also better than expected. The company reported earnings of $0.41 per share on consolidated revenue of $700.11 million, beating estimates by $0.04 per share and $103.41 million, respectively. Despite the challenging macroeconomic conditions, Teekay Group delivered the highest fiscal year adjusted earnings since 2008, generating an adjusted net income of $68 million and total Teekay parent free cash flow of $149.7 million.

Looking ahead to 2016, despite the anticipated redelivery of Teekay Offshore's Varg FPSO after operating on the Varg field for almost 18 years, the Teekay Group's operating cash flows are expected to remain relatively strong supported by high fleet utilization, the delivery of various growth projects in 2016 and the continued strength in the conventional tanker market. In addition, we are focusing on project execution, operational efficiencies and securing required financings [sp.] for our two MLPs.

In addition, if Saudi Arabia continues its market-share-over-everything-else strategy and contango continues in the crude futures curve, demand for tankers will remain strong too.

2. No change in dividend policy
Teekay management isn't planning on changing its variable dividend policy anytime soon. Management first notes that the December 2015 dividend cut wasn't due to deteriorating fundamentals, but rather to the stormy capital market:

Unlike most dividend cuts that generally coincide with weak business outlooks and declining operating cash flows, the cuts announced by Teekay LNG and Teekay Offshore were in response to the disconnect we witnessed between the capital market and the relative stability of our LNG and offshore businesses. Our bond and unit prices declined precipitously in line with the oil price declines, making external capital prohibitively expensive.

The decision in December to temporarily reduce Teekay Corporation's dividend was a direct result of temporary cash distribution reductions by our two MLPs, Teekay Offshore and Teekay LNG. It was a difficult decision and was caused by the inability of both MLPs to access competitively priced capital in the current negative capital market environment and was not caused by a shortfall in the cash flows of our operating businesses.

Management then affirms its belief that funding growth now instead of increasing the dividend is the right choice for long-term shareholders:

We believe the reductions are in the best interests of long-term investors as the reallocation of a significant portion of our internally generated cash flows will be used to fund our profitable growth projects scheduled to deliver over the next several years and which we expect will result in higher available distributable cash flow per unitholder at each MLP.

Investor takeaway
Although companies that cut their dividends by 90% and whose share prices badly lag the market are normally in dire shape with shrinking cash flows and heavy debt burdens, Teekay's situation is a bit different. Despite cutting its dividend, Teekay's fundamentals are strong. Teekay's subsidiary partnerships, Teekay LNG Partners (NYSE: TGP) and Teekay Offshore Partners (NYSE: TOO), each have long-term, fee-based contracts with high-quality counter-parties for the majority of their ships. Teekay's other subsidiary, Teekay Tankers (NYSE: TNK), recently reported realizing the strongest annual crude tanker rate in seven years, driven by low crude tanker fleet growth and the 1-million-barrel-per-day increase in OPEC production. Because of the strong tanker demand, Teekay Tankers generated strong free cash flow of $74 million, or $0.48 per share, for the fourth quarter. 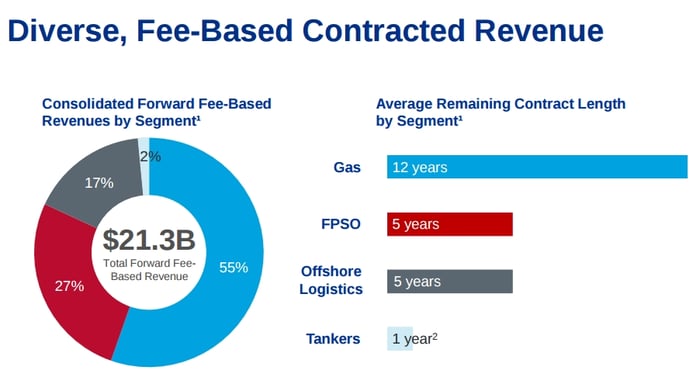 The company reported an excellent fourth quarter and a robust 2015 despite the challenging macro energy conditions. Management believes 2016 will be another strong year and at $9.66 per share, Teekay trades at just above its net asset value of $9.34 per share. When debt markets normalize and industry growth capital becomes affordable again, Teekay will raise its dividend, and its stock price will recover some of the ground it gave up last December. Teekay is a quality company that deserves a higher stock price.