Since the start of this year, shares of 3M (MMM -1.86%) have been on a tear -- well, a tear for a $100 billion conglomerate. The move was sparked by the multinational giant's fourth-quarter earnings, which beat expectations despite declining sales and earnings. Fourth-quarter revenue fell 5.4% year over year to $7.3 billion, translating to a 8.3% fall in earnings to $1.66 per share. 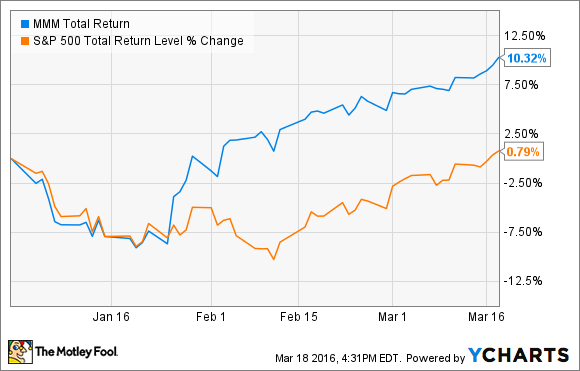 Although investors wouldn't know it from 3M's recent rise in shares, 3M's earnings reflect a number of challenges facing the company that management expects will continue into 2016. The following three areas could adversely affect 3M's business and drive the stock lower from here.

1. Continued strength of the U.S. dollar
3M conducts about 60% of its business outside the U.S., where it deals in local currencies. In periods when the dollar is strong, other currencies become weaker and translate to fewer dollars. During the fourth quarter, the U.S. dollar strengthened compared to the year before, which reduced 3M's revenue by 5.8% -- or $448 million -- year over year.

At 3M's fourth-quarter operating margin of 20.5%, that $448 million revenue headwind would've translated to $91.8 million in operating income. Using 3M's fourth-quarter effective tax rate of 29%, $65.2 million of the $91.8 million in operating income would've flowed to the bottom line. With 625.4 million shares outstanding at the close of fourth quarter, currency headwinds affected 3M's bottom line by $0.10 per share -- or by about 6% -- during the quarter.

Another way to look at this currency impact is if zero expenses were incurred on the original $448 million revenue headwind except for income taxes. In this ideal scenario, 3M's bottom-line earnings would have improved by $0.51 per share -- or nearly 31%.

Methodologies aside, if the dollar continued rising from here, it would likely to continue putting pressure on 3M's sales and earnings results, which investors may view unfavorably compared to current growth expectations.

2. The global economy weakens more
Between the fall of oil and the impact it's had on resource-based economies, the "hard landing" slowdown in China, and subdued growth in the U.S., investors have their fair share of concerns regarding global growth prospects. For a truly global company like 3M, this economic sluggishness and uncertainty has real consequences on its businesses.

About six weeks before releasing its fourth-quarter earnings, 3M slightly lowered its 2015 guidance and issued 2016 guidance that reflects the realities of slow growth. This year, 3M believes it can grow sales between 1% and 3% in local organic terms, which excludes the impact of acquisitions and currency headwinds. Of course, if the global economy shows further signs of weakness, 3M's 2016 outlook may have to be revised lower, which likely wouldn't be good for its stock price.

3. Borrowing costs rise
In recent years, 3M has taken on more debt to fund its buyback program, dividend, and other parts of its business. It's paid a dividend for more than 99 years without interruption and increased it for each of the last 57 years. Along with a fresh $10 billion buyback program announced last month, 3M raised its annual dividend payment by 8% to $1.11 per share. 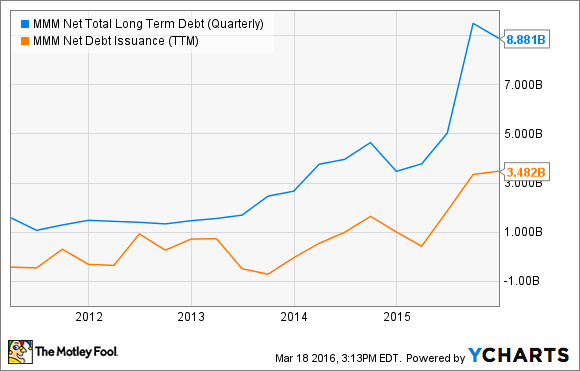 Including short-term debt, 3M's total debt load was $10.8 billion at the close of 2015. With only $1.9 billion in cash on its balance sheet, 3M's capital return plans are likely to be met through a combination of issuing more debt and its operating cash flow. Thanks to low interest rates, 3M's increased debt load only recently began to increase its interest payments. 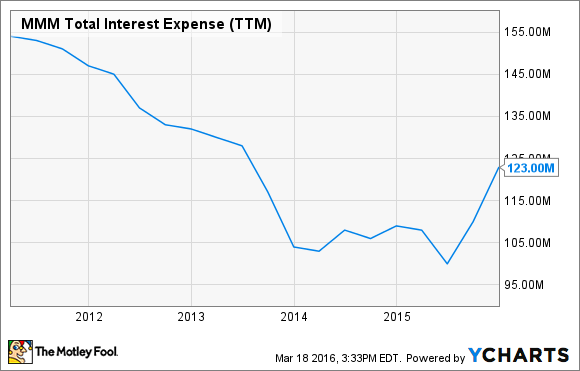 Eventually, if 3M continues issuing debt, its servicing costs are going to rise, whether it's from central banks raising interest rates or its credit rating gets downgraded from a rating agency. According to 3M's 2015 annual report, the company currently has a AA- credit rating with a stable outlook from Standard & Poor's and a Aa3 rating from Moody's with the outlook being negative. 3M also disclosed that its

Putting it all together
As a company that's been around for over a century, 3M has a deep history of innovation and a proven ability to adapt to changing circumstances. However, if the U.S. dollar rises, the global economy weakens, or borrowing costs increase, it could adversely impact its business -- and send its stock lower.