Please ensure Javascript is enabled for purposes of website accessibility
Log In Help Join The Motley Fool
Free Article Join Over 1 Million Premium Members And Get More In-Depth Stock Guidance and Research
By Jay Yao - Mar 21, 2016 at 10:45AM

Buying waste management stocks won't help investors get rich fast. Because demand for waste services is for the most part saturated, the sector will grow only as fast as the population grows in the long run. The sector's slow growth potential generally precludes any speculative manias that might send waste management stocks surging far above their fundamental values.

What buying waste management stocks will help investors do, though, is retain their wealth and steadily add to it.. Unlike demand for cyclical or luxury goods, waste services are a basic need, and don't change very much when the economy declines or expands. The stability of waste management stocks and their consistent earnings power in good times and bad make them great dividend candidates. With that in mind, let's take a closer look at the three best dividend plays in the waste management sector.

1. The undisputed leader in the industry 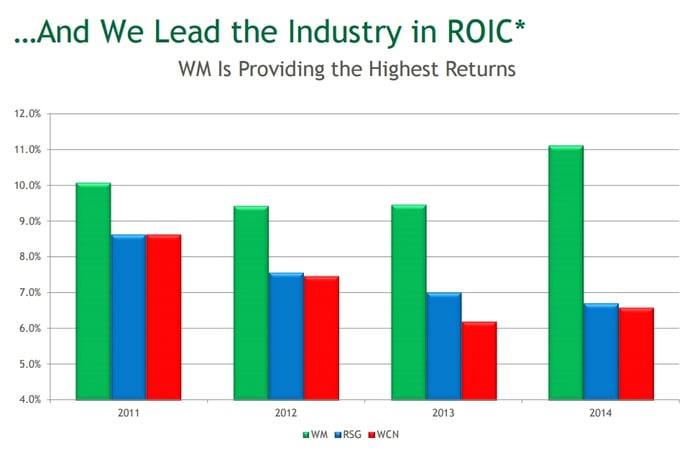 2. Another market leader
As the second largest company in the industry, Republic Services (NYSE: RSG) has several strengths, including having a national vertically integrated solid waste and recycling platform and a high quality asset base that improves efficiency. Given that multi-year contracts account for a significant part of its business, Republic Services also has excellent revenue and earnings visibility that make management's predictions more likely to come true.

Given that analysts expect Waste Connections to increase its earnings per share by an average of 8.57% each year for the next five years, the company's dividend could continue increasing by double-digit percentage rates for the foreseeable future. Waste Connections has considerable earnings growth ahead because of its planned merger with Progressive Waste Solutions (NYSE: BIN) announced in January. Management estimates that the merger will provide over 20% accretion in year 1 adjusted free cash flow per share and generate around $50 million in annual SG&A cost savings.

Investor takeaway
Given their consistent growth over the years, Waste Management and Republic Services trade at reasonable valuations of between 20 and 21 times forward earnings estimates and pay attractive dividend yields. Waste Connections has substantial future earnings growth given its potential synergies from its merger with Progressive Waste Solutions. Each of the three stocks would be a great addition to any dividend portfolio.