Dividend-seeking investors can't be blamed for liking CVS Health Corp. (NYSE: CVS). While the giant pharmacy services company's forward dividend yield is only 1.69%, CVS seems well-positioned to keep the dividend checks flowing. And with Wall Street projecting solid double-digit annual earnings growth over the next several years, the stock should have room to run as well.

But are there better healthcare stocks for dividend lovers to consider? You bet. Here are two that stand out.

The granddaddy of biotechs
Many investors seeking reliable income are dismissive of biotech stocks. However, Amgen (NASDAQ: AMGN) shouldn't be overlooked. This "granddaddy of biotechs" has been around for over 35 years and is a relatively steady performer in the often volatile biotech industry.

Amgen's current forward dividend yield of 2.77% easily beats that of CVS Health. The big biotech also has been steadily increasing its dividend payments at a significantly faster rate than the pharmacy services company. 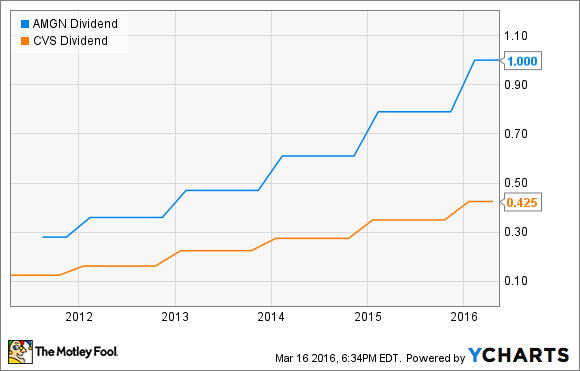 You shouldn't have to worry too much about the dividend being cut anytime soon. Amgen pays out less than 35% of its earnings in dividends. That's only a little higher than CVS Health's 30% dividend payout ratio.

Should investors be concerned, though, about Amgen's growth prospects? Not really. It's true that the company experienced 9% year-over-year sales declines in 2015 for two blockbuster drugs -- Epogen and Neupogen. However, top-selling Enbrel is still growing at a healthy rate. Amgen also saw sizzling sales growth from relapsed multiple myeloma drug Kyprolis.

Amgen should also have a winner on its hands with new cholesterol drug Repatha, which analysts predict could rake in peak annual sales of over $2.5 billion. Amgen also recently won a patent dispute with two key rivals, which could help make Repatha's numbers look even better.

The giant of biotechs
Amgen isn't the only biotech stock that should appeal to dividend-hungry investors. Take a look at the biggest biotech of them all -- Gilead Sciences (NASDAQ: GILD).

Granted, Gilead only began returning cash to shareholders in the form of dividends last year. But its dividend yield of 1.92% still tops that of CVS Health. And Gilead announced in February that it's boosting the dividend from $0.43 to $0.47 in the second quarter, which should increase the yield to over 2%.

Gilead Sciences' dividend payments currently amount to less than 11% of earnings. That's really low. It isn't far-fetched at all to think the biotech will use some of those earnings to continue to raise its dividend in future years.

Some investors are worried that Gilead's earnings growth might taper off with the recent launch of a rival hepatitis C drug that could take market share away from Harvoni and Sovaldi. Others analysts have lowered expectations for Gilead after it canceled clinical trials of cancer drug Zydelig due to serious safety concerns. These are valid concerns, but I don't think they're enough to derail Gilead's long-term future.

So far, that rival hep C drug -- Zepatier -- doesn't appear to have affected Harvoni sales very much. As more payers loosen the purse strings for covering these new hepatitis C drugs, Gilead should do quite well. And while the recent Zydelig news was bad, Gilead has several other promising cancer drugs in its pipeline.

Forget me not?
Amgen and Gilead Sciences both look like better dividend picks than CVS Health. That doesn't mean that CVS is a bad choice, though.

CVS Health continues to make smart strategic decisions. The company's acquisitions position it well on the retail side and in long-term care. CVS' pharmacy benefits management unit also seems positioned to continue its solid growth. This sound footing increases the likelihood that the company will keep paying dividends -- and keep increasing them.