Another iPhone announcement, another round of people venting frustration about 16 GB iPhones.

iPhone SE is a logical move. Apple still committing the criminal offence of producing a 16GB phone though.

Don't get me wrong, from a consumer perspective, Apple's (AAPL -1.96%) insistence on only putting 16 GB of storage in the base iPhone models is pretty frustrating, and the criticisms are justified since modern use cases really do require more capacity. 4K video does gobble up storage like nothing else, which is a new addition to the iPhone SE.

But from an investor and pricing strategy perspective, I've always been a fan of the aggressive upsell strategy.

Look how well it works
Apple first implemented this new storage pricing structure with the iPhone 6 in 2014, and it did wonders for iPhone average selling prices. The uplift was twofold: Apple finally tapped into pent-up demand for a larger iPhone with the 4.7-inch display but also fetched plenty of $100 upgrades to 64 GB or higher.

The net result was a major uplift in iPhone ASPs that have been sustained ever since. 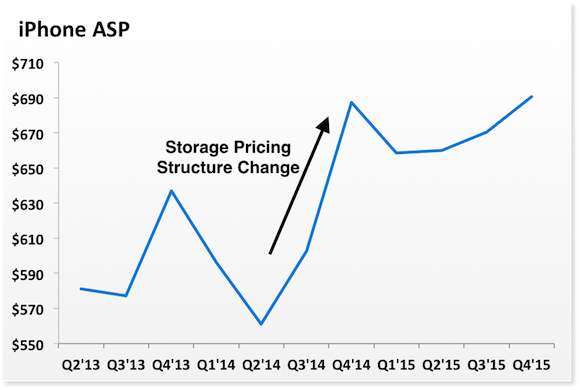 In fact, investors are now seeing signs that Apple is even shifting other product lines to this same strategy.

Simply put, Apple is flexing its pricing-power muscles. The company is easily the most successful reseller of integrated commoditized components, thanks to strong overall differentiation in the product. Think about the $30 cellular baseband modem that Apple sells for $129 in cellular-equipped tablets. Or the NAND flash storage that we're talking about right now.

However, each year that goes by it becomes a tougher sell, since the storage requirements for modern apps and services continue to rise as well. Eventually, Apple will need to give in to consumer pressure or risk facing customer backlash. But until then, as a shareholder, I won't mind.