Shares of this chip-maker have done extremely well over the last five years; what do the coming years hold?

The TSMC-built variant of the A9 chip inside of the iPhone 6s/6s Plus. Image credit: Chipworks.

Contract chip manufacturer Taiwan Semiconductor Manufacturing Corporation (TSM 1.97%), or TSMC, has been one of the key beneficiaries of the utter explosion in demand for mobile devices. A typical smartphone contains a lot of chips, ranging from power management circuits all the way up to complex applications processors that, in some ways, can be even more complex than the processors found in personal computers.

Most of the companies that supply these chips into the smartphone market are fabless -- meaning that they rely on contract chip manufacturers to actually build their designs. As a result of this, TSMC -- the largest of these manufacturers -- has seen its revenue and net income surge. 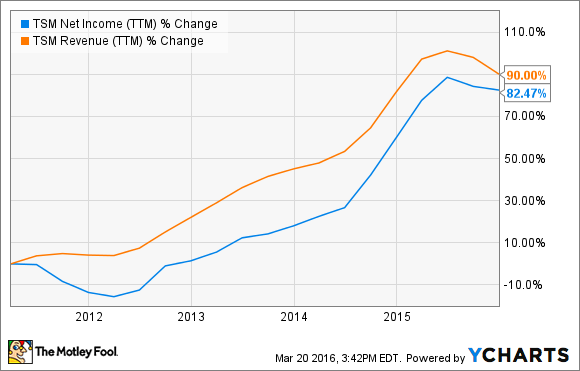 Unsurprisingly, this boom in sales and profits has led to the stock doing quite well over the last five years, with shares trouncing the PHLX Semiconductor ETF (SOXX 2.89%) in that period. In the March 18 trading session, shares of the chipmaker hit a new all-time high of $26.25, valuing the company at nearly $130 billion. 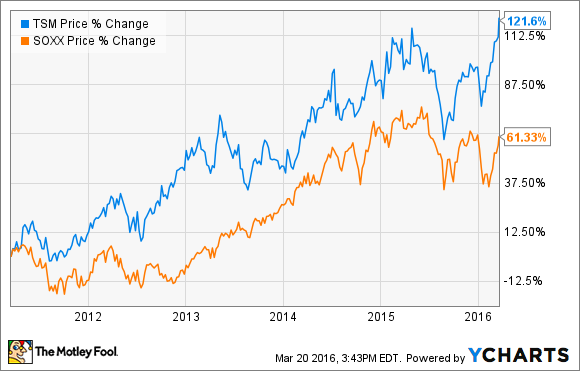 What's next for TSMC investors?
It's likely that the "easy money" in TSMC has been made and that it will be difficult for the stock to out-perform the broader semiconductor industry as a whole going forward. Indeed, although TSMC seems optimistic about its ability to grow content share inside of smartphones (leading to higher revenue per unit), unit growth isn't likely to be anywhere close to where it has been in the past.

Indeed, research firm IDC reports that the smartphone market grew units at a sub-10% clip in 2015 and forecasts a compounded annual growth rate through 2019 should be along the lines of 7.4%.

At its recent Technology Symposium, per EETimes, TSMC talked about its increasing ambitions to go after non-mobile segments of the semiconductor market such as high performance computing, the Internet of Things, as well as the automotive markets.

Successful attacks on these markets via its customers, coupled with continued content growth, should allow TSMC to outgrow the smartphone market as a whole.

Given that TSMC trades for a fairly modest multiple (just over 14 times trailing twelve month earnings as of a recent check), this isn't a call for TSMC shares to drop precipitously or anything like that. Indeed, it would appear that the market has correctly "sniffed out" that the period of hyper-growth will soon come to an end.

From here on out, I expect that TSMC will be a highly profitable leader in its industry that is ultimately able to deliver modest growth for the foreseeable future.

How about the stock price?
A stock price is a function of two things: earnings and the multiple that investors are willing to pay for those earnings. TSMC trades at a below market multiple because it is large and dominant in its industry, an industry that's maturing.

I don't think that the stock will see a significant repricing in terms of multiple anytime soon, barring some significant industry/macroeconomic shift that impacts the stock market/semiconductor stocks as a whole. With that in mind, my expectation is that TSMC's stock should move up year-after-year as long as earnings continue to grow.

This isn't the kind of stock that one is going to "get rich" off of, but as far as investments in the semiconductor industry go, it's probably a solid bet for more conservative investors.