Vale is trying to play up the positives, but there are still a lot of negatives.

When Vale S.A. (VALE -3.32%) reported earnings, CEO Murlio Ferreira explained: "Vale's financial performance was affected by the sharp drop in commodity prices in 2015. Despite this drop, we have successfully managed to reduce cost and expenses, implemented growth projects, and advanced our divestment program, while maintaining a stable gross debt position." In other words, there's a mix of good and bad here. Here are five key takeaways from management that you'll want to know.

1. Yeah, it's rough out there
"Despite all our efforts, Vale reported a net loss of $12.1 billion in 2015," Ferreira conceded shortly after pointing out the list of positives. That's a full-year loss of around $2.35 a share. Just how bad things are was hinted at later in the CEO's comments, when he explained, "We wanted to restate that we are exploring more aggressive options to reduce our debt, including the sale of core assets."

It's worth noting that BHP Billiton (BHP -1.91%) CEO Andrew Mackenzie has discussed the possibility of buying assets. While that means there might be someone out there interested in what Vale has to offer, it also puts Vale's current situation into a clearer light: This miner is struggling.

2. The big mine
Part of the problem Vale faces is related to its spending plans, most notably the giant S11D mine, the largest iron ore mine project in Vale's history. It's roughly 80% complete. However, the CEO noted, "2015 was a challenging year, and we recognize that the sharp decline in commodity prices expected by many market participants can represent a challenge to our strategy of deleveraging the company after the conclusion of S11D." That's why it has been forced to look at "more aggressive" actions.

But S11D will change things for Vale. On one hand, the miner is opening a giant new mine at just about the worst time possible, since a supply/demand imbalance has left iron ore prices weak. But the mine will sit toward the low end of the cost curve and should allow Vale to shift its production mix and, thus, reduce its costs even further than it has already. So, despite the financial impact the spending is having on Vale today, the long-term benefit should be worthwhile. It just has to get there.

3. Record production, lower costs
That said, Vale is already hitting on all cylinders when it comes to production. For example, Ferreira noted, "Vale delivered a sound numbers performance in 2015, with annual production records in iron ore, pellets, copper, nickel, cobalt, and gold." That's even more impressive when you examine the cost side of Vale's ledger.

Essentially, despite the tough commodity price environment, Vale is doing quite well operationally. But that's a mixed blessing. More volume today increases the downward pressure on commodity prices. However, those higher volumes help increase Vale's revenues and enhance productivity. Thinking long-term, assuming that Vale finds a way to finance its current spending plans without too much damage, it clearly knows how to run a solid mining operation. The question is really about getting through this tough patch with as little pain as possible.

4. Samarco -- better, but not done yet
That's why the Samarco disaster is doubly troubling here. This mine, a joint venture between BHP Billiton and Vale, saw mine waste break through a containment dam and flow through a couple of towns, killing a number of people along the way. Pretty much all the CEO had to say was, "We have been working diligently with Samarco since the beginning, and we maintain our commitment to support the affected regions, the communities, and the environment."

That "work" has since resulted in an agreement with Brazil over funding the cleanup, to the tune of $1.1 billion each for Vale and BHP. However, that probably won't be the last you hear of this disaster, since there's the potential for criminal and/or civil cases arising from the event. But as you can imagine, adding another $1.1 billion in costs won't make life any easier for Vale in the near term. That's another reason core asset sales could be in the company's future. 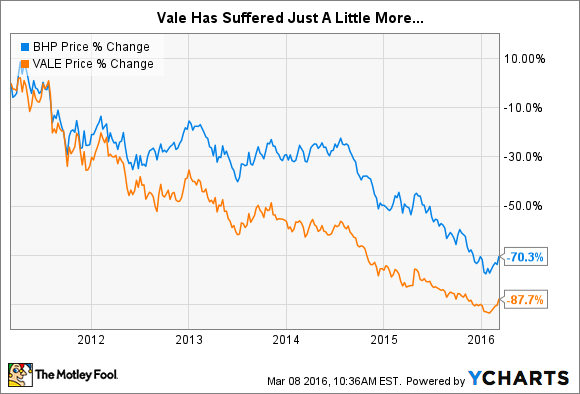 5. Leveraged to iron ore
According to the CEO, "Despite a scenario of declining commodity prices and a still high capital expenditure, Vale paid $1.5 billion in dividends in 2015, while maintaining its gross debt relatively flat at $28.9 billion." That's great, but the dividend is now gone in an effort to save cash, and Vale really needs to strengthen its financial position more than simply holding the line. BHP, just for reference, reduced its dividend instead of eliminating it and, as noted, is talking acquisitions, not core asset sales.

That helps explain why Vale's shares jumped so much more than BHP's when iron ore prices started to move higher recently. Essentially, Vale can highlight all the positives it wants, but the real issue is surviving the downturn in strong enough shape to benefit from its capital spending plans, most notably SD11. It was able to hold the line last year, but that's going to be harder to do in 2016 unless something gives.

Vale, then, is something of a leveraged bet. If commodity prices rebound, the miner will find it easier to survive the downturn without too much (more) pain. That could lead to material upside potential, since investors appear to have baked in a lot of negative news here. If the downturn lingers, however, Vale is already talking about cutting into the bone with core asset sales. That's not a great sign.

As such, Vale's not really appropriate for risk-averse investors. BHP would probably be a better option. But for more aggressive sorts looking for a turnaround/contrarian mining play, Vale could be worth a deep dive. You'll just need a strong stomach for what could easily be a roller-coaster ride with some serious dips.

Reuben Brewer has no position in any stocks mentioned. The Motley Fool owns shares of Companhia Vale Ads. We Fools may not all hold the same opinions, but we all believe that considering a diverse range of insights makes us better investors. The Motley Fool has a disclosure policy.