With a big value-unlocking catalyst on the horizon, the choice is clear which mining stock represents the more compelling opportunity.

The mining and metal sector has been crushed over the past few years due to more than adequate supply, project cost overruns, and operational missteps. That has caused mining stocks to slump significantly, with aluminum producer Alcoa (AA) and precious metals producer Hecla Mining (HL 2.05%) both vastly underperforming the market over the past five years: 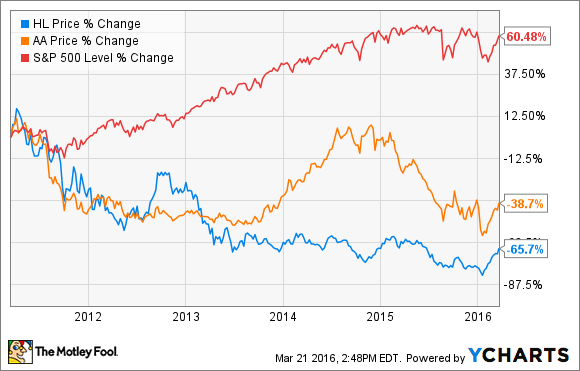 Some investors might see this growing value gap as a potential opportunity for profit should mining stocks go back into favor. That said, when choosing between these two particular mining stocks, there's a catalyst on the horizon that gives one the clear edge over the other.

The case for Hecla Mining
Hecla Mining is the largest silver producer in the U.S. as well as the third largest lead and zinc producer and a major producer of gold. That diversification across metals brings it some sense of stability. In fact, no miner has a longer history of stability in the industry than Hecla Mining, which has been publicly traded on the New York Stock Exchange for 125 years, making it the oldest NYSE-listed precious metal mining company in North America.

That rich history aside, investors are more focused on what's ahead than what a company has accomplished in its past. It's a future that looks pretty compelling given that the company has a strong growth pipeline that will keep it busy for the next decade: 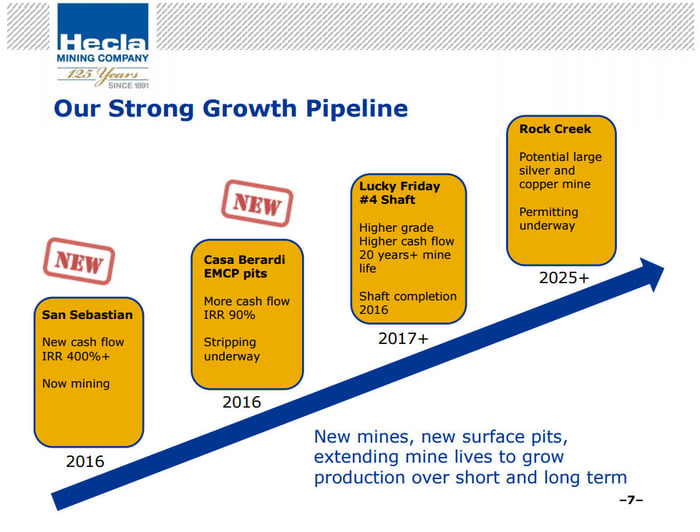 Those projects are expected to enable Hecla Mining to continue growing its reserves and production in the years ahead, continuing a trend where reserves are up 243% over the past decade and production is up 162% since 2012. Having said that, where the company runs into problems is the fact that its two key commodities, silver and gold, are both down over the past five years, which has mitigated all of its production growth by putting significant downward pressure on earnings. 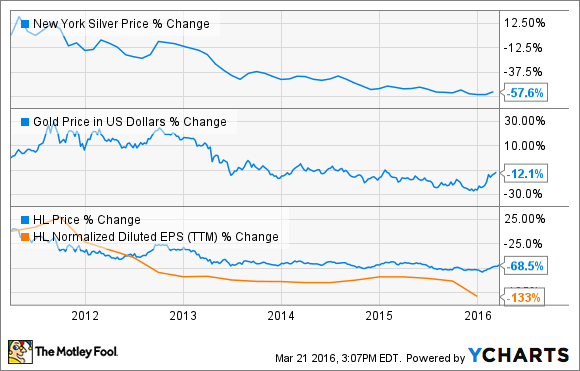 That's a big concern going forward because the company could continue to grow production, but its profits could continue to trend lower. In other words, its entire future success is predicated on the price of these two commodities improving, which might not happen.

The case for Alcoa
As the world's largest, low-cost bauxite miner and largest, most attractive alumina business, Alcoa holds a strong position in the growing aluminum space. It's a commodity that's expected to see its demand effectively double off its 2010 level by the end of this decade, driven by global growth and aluminum's growing importance in key industries like aerospace and automotive.

However, what sets Alcoa apart from most mining companies is the fact that it currently not only operates a very competitive global upstream mining business, but it also operates a very innovative value-add business, with it being a premium supplier of high-performance advanced multi-material products. It's a business that makes high-margin products such as fasteners, engine airfoils, and a whole host of other innovative products that support a number of rapidly growing markets. 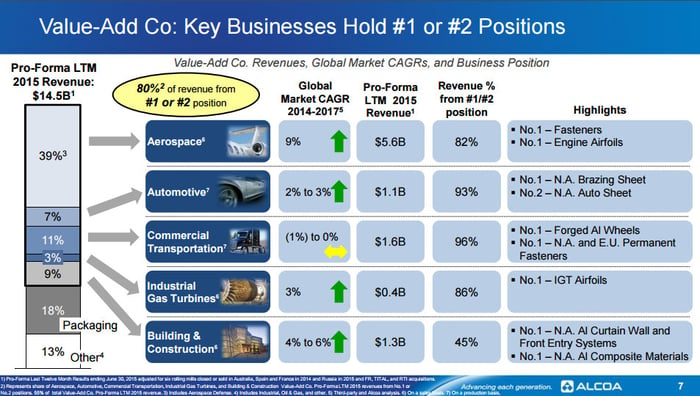 Alcoa is actually in the process of splitting into two companies in order to unlock the value of both businesses: They are an upstream company that will retain the legacy Alcoa name and a value-add company that will be called Arconic. As such, investors who buy Alcoa now will own a piece of both companies upon separation, which is a pretty compelling opportunity. Arconic is expected to be a high-margin growth company, while Alcoa is expected to be more of a stable growth-and-income play.

Investor takeaway
Alcoa's value-unlocking move to split into two pushes it over the top and makes it the better buy over Hecla Mining right now. Not only do investors get one of the best aluminum miners in the sector, they also get a very compelling value-add business that's being unshackled to pursue untapped growth potential. That business has a more visible path to create value than a silver and gold miner, which is shackled to the price of those precious metals that have been nothing but a weight over the past few years and might continue to weigh it down in the future.