Please ensure Javascript is enabled for purposes of website accessibility
Log In Help Join The Motley Fool
Free Article Join Over 1 Million Premium Members And Get More In-Depth Stock Guidance and Research
By Daniel B. Kline - Mar 22, 2016 at 9:20AM

The company had a great year and its stock benefited, but there could be problems ahead.

Maybe it's price, maybe it's convenience, or maybe there are just parts of the country (and world) where barely passable pies draw a huge audience. Whatever the reason Domino's has been on a tear, posting impressive Q4 as well as full-year results.

Those positive numbers caused the company's stock to jump from a close of $117.61 on Feb. 24 to $132.90 on Feb. 25, after it reported results -- a 13% jump. Shares have traded in that range in the weeks since suggesting that the bump may not be a short-term spike due to good numbers.

But, just because Domino's had a good year and the market rewarded those results does not mean that the company has clear sailing ahead. It's very possible that the conditions which helped its rise could change, sending shares moving back in the wrong direction 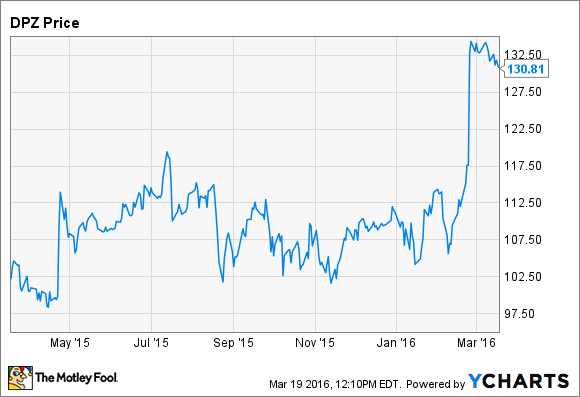 As you can see above, shares jumped when Q4 and full-year earnings were reported in February. Source: YCharts.com

How well did Domino's do?
The company, which famously rebooted its pizza in 2010 (making it OK instead of awful), had a very good fourth quarter and full year in 2015.

What could hurt Domino's?
So far no company has scored nationally or internationally with a fast-casual (as opposed to Domino's being fast food) pizza concept. Yum! Brands (YUM 1.86%) tried to launch a menu aimed at the users captivated by the wealth of options offered at fast casual leaders including Chipotle (CMG 3.06%) and Panera Bread, but it largely failed.

Dubbed "Flavor of Now," the Pizza Hut offering looked to take pizza more upscale with fancier toppings and more sophisticated flavors. That seemed like a good idea, but it was not something customers were looking for at Pizza Hut and it did not increase sales, Fox News reported.

But, just because more upscale Millennial-friendly pizza did not work for Pizza Hut does not mean it will not work for a brand with better positioning. That happening -- someone creating a well-priced higher-end national or international pizza offering with higher perceived quality -- could take Domino's down.

It could happen
The rise of Chipotle clearly hurt other fast-food chains (including Yum!'s Taco Bell) as well as the leading low-end burger purveyors. National delivery chains including Domino's appeared to be mostly immune from the Chipotle effect perhaps because delivery pizza is not analogous to other fast food. But, Chipotle proved that consumers would pay more for a better product leaving Domino's potentially vulnerable to a higher-end, higher-priced, but still affordable pizza chain.

Of course, being the Chipotle of pizza is a prize that a lot of companies are pursuing, but none has actually achieved. Still, local and regional players including Blaze Pizza, Uncle Maddio's Pizza Joint, and Pie Five, among a number of others led by industry veterans are trying to make it happen.

If one of these companies breaks through it could hurt Domino's appeal because being cheap, convenient, and readily available proved to be not enough in other fast food segments when the right fast casual competitors came along.