What: Well, that didn't last long. After topping $40 a barrel earlier this week, oil closed down 4% today, taking it below that level after government data showed a much larger-than-expected build in oil inventories. That weighed heavily on financially weak oil stocks, with CONSOL Energy (CNX 0.33%), Oasis Petroleum (OAS), Whiting Petroleum (WLL), Plains GP Holdings (PAGP 0.62%), and Freeport-McMoRan (FCX -2.34%) all taking it on the chin today: 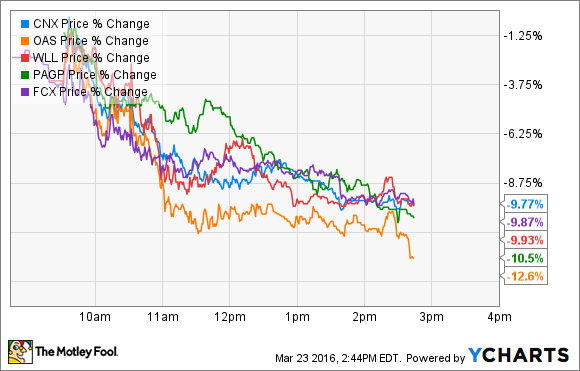 So what: According to a report by the U.S. Energy Information Administration, crude oil storage inventories surged by 9.4 million barrels this week. That was well above the consensus of a 2.7 million barrel inventory build for the week, and much higher than last week's build of 1.3 million barrels. With this week's increase, there is now 532.5 million barrels of oil sitting in storage around the U.S., which is historically high for this time of year. In fact, that's actually enough to last the U.S. six months at our current consumption rate.

With such a glut of oil in storage, it's putting a lot of pressure on the oil price to send a message to oil companies to stop drilling. It's a message that has finally hit home this year for many oil companies, with Oasis Petroleum and Whiting Petroleum slashing investments by 61% and 80%, respectively, over what they spent last year. That diminished investment will cause production to slump by 6% at Oasis Petroleum, and 18.5% at Whiting Petroleum over last year's average rate.

That said, not everyone is cutting back supplies. CONSOL Energy is expected to boost its production by 15% this year, while Freeport-McMoRan is expected to increase its output by 9%. However, that's partially because CONSOL Energy primarily produces natural gas, while Freeport-McMoRan's production increase is being fueled by long-term projects that are finally coming online this year.

Still, the overall decline in oil production in the U.S. is having a notable impact on the entire industry, including midstream companies like Plains GP Holding. The company's namesake MLP is focused on crude oil transportation, but those volumes are declining because of weaker prices. That has the potential to have a trickledown impact on Plains GP Holding because all of its income is derived from its struggling MLP.

Now what: After surging above $40 a barrel in recent days, crude oil is taking a breather today after new data showed that the oversupply issues aren't getting any better. That's partially because companies like Freeport-McMoRan are still growing production thanks to projects set in motion years ago that are finally starting up this year.

That give-and-take of new production against legacy declines from companies like Oasis Petroleum and Whiting Petroleum will continue to be the big storyline this year. It's a storyline that has been playing out in the inventory numbers, which continue to head in the wrong direction. That's helping to feed the oil bears today, and it will continue to do so until those numbers start to decline, too.

Matt DiLallo has no position in any stocks mentioned. The Motley Fool owns shares of Freeport-McMoRan Copper & Gold. We Fools may not all hold the same opinions, but we all believe that considering a diverse range of insights makes us better investors. The Motley Fool has a disclosure policy.