The company plans to raise $38 million via a stock offering.

What: After announcing it will tap equity markets for financing to sure up its balance sheet, shares in Celator Pharmaceuticals, (NASDAQ: CPXX) are rallying 19.08% at 12:00 p.m. EST Wednesday. 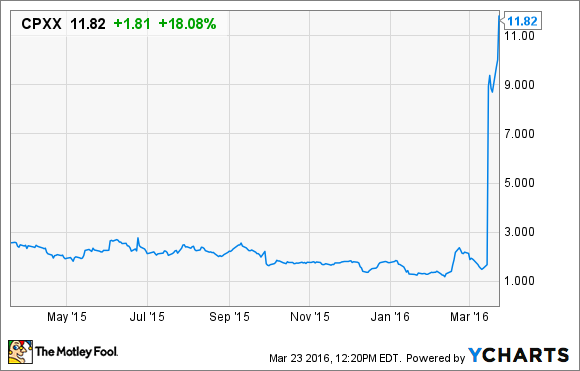 So what: That was fast! After reporting full year results on March 21 showing that its cash on hand was around $32 million, Celator Pharmaceuticals has announced that it has priced an offering of 4 million shares at $9.50 per share.

When all is said and done, management expects that it will pocket $38 million before fees.

The offering dilutes investors, however, it also firms up the company's finances ahead of a potential regulatory approval of its first commercial drug next year.

After demonstrating increased efficacy and similar safety in trials, Celator Pharmaceuticals expects to file for FDA approval of its reformulation of the commonly used chemotherapy drugs cytarabine and daunorubicin in the third quarter of this year. A filing for approval in the EU is expected in Q1 2017, too.

Now what: Celator Pharmaceuticals was already expecting its cash on hand to get it halfway through 2017, but given its timeline suggests a launch of its drug -- it will be sold under the brand name Vyxeos -- around the same time, I speculated earlier this week that it would need to raise additional money.

By offering shares to the public now, management takes advantage of a massive uptick in its share price following the release of its positive clinical data. Doing the offering now also removes a potential overhang of uncertainty that might have kept investors uneasy.

Assuming this offering gives the company enough financial firepower to launch Vyxeos, thereby removing the need for further dilutive offerings, investors might want to consider picking a spot to buy. After all, cytarabine and daunorubicin have been a standard of care in AML patients for 30 years and Celator's ability to improve upon them suggests that Vyxeos could be a top seller.

Is Moderna Stock a No-Brainer Buy With Omicron Boosters on the Way?