The world's pre-eminent burger chain feels the need to make progress on its mobile-based technology. Why it should take its time in developing its digital offerings. 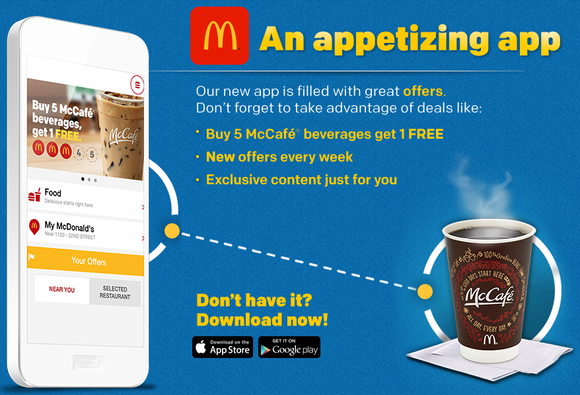 After a successful round of menu innovation last year, McDonald's Corporation (MCD 0.22%) is seeking to improve its competitive position via technology. The company has experimented with interactive kiosk ordering while test-marketing its "Create Your Taste" customization initiative. But it trails peers such as Starbucks Corporation (SBUX 1.15%) and Dunkin' Brands (DNKN) in building a platform to engage and transact with customers via mobile devices.

The nature of that future interaction isn't quite clear. Ozan was frank in pointing out during his question-and-answer session that McDonald's has been late to join quick-service operators in offering a mobile app. Consumers in the U.S. are developing an expectation that they can order, receive affinity (loyalty) points, and interact socially with a brand simultaneously on a mobile device, and McDonald's risks losing millennial customers if it doesn't gradually build its own system.

Starbucks has much to do with this new expectation, having pioneered the concept and execution of a digital platform. But Starbucks and coffee-driven Dunkin' Brands are able to build loyalty through free offers for customers who reliably visit several times a month for a coffee fix, while coupling their orders with food items.

McDonald's customers aren't necessarily as caffeine addicted or loyal, so much as they're in search of value, which the burger giant reliably provides. Ozan characterized a wide swath of McDonald's customers aptly, remarking that they "value value, and they value offers."

Herein lies some risk in relation to a mobile-based affinity program. McDonald's already uses extensive national and regional promotions, through its evolving value menu and limited-time offers. Affinity programs, if not properly implemented, can become simply another discounting mechanism, and McDonald's doesn't need yet another window for passing on discounts. The point of a well-run affinity program is to mine data collected on customers to improve sales or profits, or both.

Of course, given the right analysis, the mobile app may leverage margin in the future. Ozan mentioned the benefit of registered customers on the platform, which enables McDonald's to move from mass marketing to individualized interactions. As I said at the outset, it's not clear how this might benefit the company. Targeted offers will almost by default have to be individualized toward customers who transact a higher average ticket, or predominantly order premium items. There isn't much economic benefit in rewarding those who already buy mostly off the value menu.

Ordering and paying ahead is harder than it seems under the Golden Arches
At the conference, Ozan also referred to an interesting problem that's delaying the introduction of an "order ahead and pay" component to the McDonald's app. Roughly two-thirds of McDonald's U.S. business is transacted at the drive-through. Theoretically, if a customer orders ahead on McDonald's mobile app to pick up food at the drive-through, it's self-defeating for that customer to wait behind other cars in the line.

The company is experimenting with solutions such as designated parking for drive-through customers who order ahead. In this scenario, a customer would wait in his or her car while an employee hand-delivers the order. This is functional, but you can see the implications for McDonald's throughput at peak hours, as employees leave their posts to wade out and make parking-lot deliveries.

McDonald's executives would be loath to admit it, but I'll wager that quandaries like this make them wonder if they really need to inject a digital platform into an operation that's been optimally refined over the course of decades.

Like it or not, however, the quick-service industry is embracing Starbucks' model, in awe of that company's many impressive statistics, such as its processing of 22% of U.S. transactions via its mobile app in December.

But McDonald's should take due time and roll out the various phases of its platform slowly and methodically. Consider that once customers get used to a digital affinity program, and especially its rewards, change can be painful if those loyal patrons believe that the modification penalizes them, something Starbucks is beginning to learn. For McDonald's, the cost of not going digital may be eventually quantified in lost customers. But without a cogent path to capitalizing on loyalty, and with kinks still to be worked through in ordering technology, the present benefits remain murky.

Asit Sharma has no position in any stocks mentioned. The Motley Fool owns shares of and recommends Starbucks. We Fools may not all hold the same opinions, but we all believe that considering a diverse range of insights makes us better investors. The Motley Fool has a disclosure policy.