India's largest automaker has been clobbered over the past year. Is the stock worth buying now?

Land Rover and Jaguar maker Tata Motors (TTM 3.45%), India's largest auto manufacturer, has been hit hard in recent months. Following the recent trend of most emerging-market stocks, the company, which operates mainly in Asia, is currently trading at almost half the value of its 52-week high. 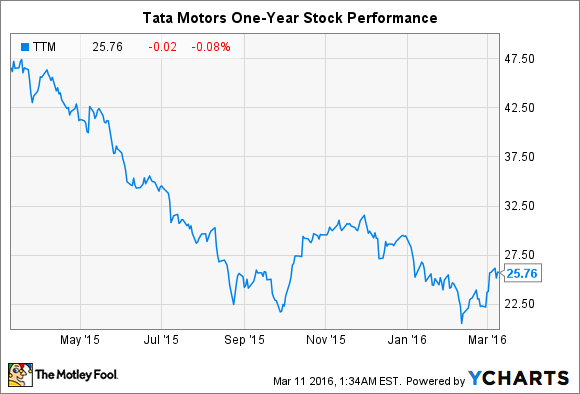 With Tata having recently posted a decent quarterly profit and strong February sales growth, is now the time to scoop up shares?

A breakdown of the business
Although Tata Motors manufactures and sells cars and commercial vehicles primarily in Asia, it also gets worldwide exposure in passenger vehicles through sales of the Jaguar and Land Rover. Here's a breakdown of the company's sales for the 2015 fiscal year:

The bulk of units sold comprise utility vehicles (or SUVs here in the U.S.) and commercial vehicles (everything from trucks to buses and construction machinery). More than half of these sales take place in India, China, and other emerging Asian markets. With the global growth slowdown led by China and other emerging markets still weighing on many stocks, we can see why Tata Motors has had a rough stretch lately.

An opportunity to buy at a discount?
With worldwide growth concerns weighing on it, how does Tata Motors compare with its competitors? What's the outlook for future growth? And is the company a buy as a result? Let's look at how the company stacks up against other auto manufacturers:

Most automakers are dealing with flat, or in some cases falling, revenue, but increasing profit margins over the next few years. As they operate in a highly competitive industry, even a small drop in global growth can adversely affect revenue and profit. This is where Tata Motors starts to look especially attractive. Already getting hit by the weakness in emerging markets in the past year, especially the slowdown in China, the Indian automaker has seen a significant drop in both revenue and earnings for the current fiscal year. This has shown up in recent stock price valuation.

Moving beyond the current weakness, the company is expected to rebound strongly. After an expected steep drop in earnings for this fiscal year, the company expects to double those earnings the next fiscal year. In its most recent quarterly earnings presentation, Tata management cited an improving Indian economy led by government spending supporting growth and infrastructure modernization as a reason for the rebound. The PEG ratio (forward price-to-earnings divided by earnings growth, which measures the premium in stock price on a company's future expected profits) sits at practically zero and is far below that of competitors. This level would indicate that the stock is currently trading at a value if that future growth were to be realized.

To support the outlook for growth in the years to come, company management has outlined a plan that focuses on India. There are two new vehicle launches scheduled each year until 2020. The company also has a strong pipeline of defense orders on the books through its commercial and utility vehicles business. Exports also remain a high focus, as Tata Motors is well positioned geographically to take advantage of the modernization of infrastructure in Asia.

With all of the news in the past year about the woes in China and emerging markets, along with Tata Motors' own weak stock performance, it appears the company is trading at a value. I believe that long-term investors should consider adding to their position at current levels, as a rebound seems to be in store soon.