Please ensure Javascript is enabled for purposes of website accessibility
Log In Help Join The Motley Fool
Free Article Join Over 1 Million Premium Members And Get More In-Depth Stock Guidance and Research
By Lee Samaha - Mar 24, 2016 at 10:46AM

When companies predict a stronger second half, it usually puts pressure on them to meet first-quarter estimates.

3D software maker Dassault Systemes SA (NASDAQOTH: DASTY) is an unusual stock in many ways. It's European and reports in euros, so, unlike most companies U.S. investors are familiar with, the stronger U.S. dollar has been a boon to its earnings in the last year or so. Moreover, its fourth quarter of 2015 surprised on the upside in terms of revenue and earnings -- not an easy thing to do when economic growth is slowing. With all this positive news out there, what exactly is the problem with Dassault Systemes stock?

The stock, not the company
In a nutshell, Dassault's guidance for backend-loaded growth, predicting that the second half will be better than the first in 2016, leaves the stock susceptible on the downside should estimates be missed in the first quarter. This may seem nuanced to the point of irrelevance, but let's consider the valuation the stock trades on and a snapshot of what market sentiment would be like if Dassault misses estimates -- the downside could be significant.

First, as you can see below, Dassault Systemes' valuation -- note that EV/EBITDA and P/E figures are for forward earnings -- reflects the company's growth potential. That's fair enough, but it's the kind of valuation that will leave the stock price exposed to any disappointment. 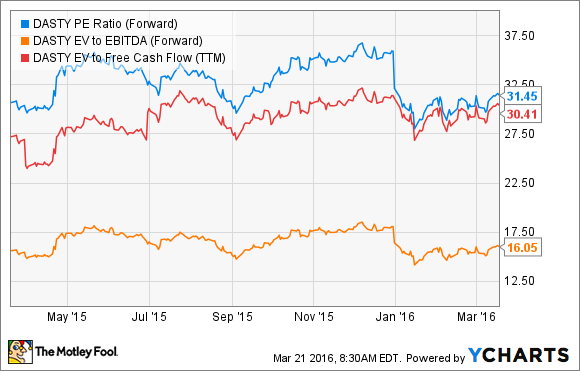 From these bullet points, it's clear that revenue growth is expected to accelerate in the second half, and the company forecasts only 18% of its full-year non-IFRS EPS to be generated in the first quarter.

...is going to be the weak quarter of 2016....There are a few reasons for that. But one of them is the very strong first quarter we had in 2015.... In 2016, because of this volatile environment, we believe our customers are going to tend to spend their investment budget in the other quarters rather than the first.

He has a point. For example, you can see how strong growth was in the first quarter of 2015 in the following chart. 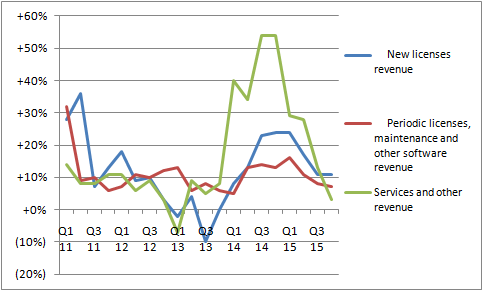 However, what's more questionable is the assumption that customers will spend their budgets later in the year -- an assumption that will be heavily scrutinized should Dassault miss estimates in the first quarter. Given that scenario, the market will surely look to downgrade full-year estimates.

Of course, none of this says Dassault will miss guidance -- the company has a good recent track record of hitting estimates -- but with many other companies with industrial spending exposure disappointing recently, it wouldn't be surprising if Dassault had difficulties.

A look at Dassault's end markets in 2015 shows broad-based industrial exposure, so it's hard to argue that Dassault isn't affected by the economic cycle. Incidentally, "diversification industries" is just a catchall definition for everything that doesn't fit in the other categories, including things like construction, consumer goods, process and utilities, marine etc. 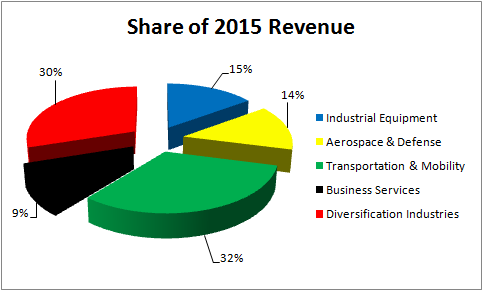 The bottom line
All told, Dassault is under some pressure to at least hit its first-quarter guidance, particularly after such a strong fourth quarter. Any miss will see the stock punished hard in my view, as skepticism is likely to grow on the idea that growth will be back-loaded this year.

That's not to say guidance won't be met, or that any post-earnings fall wouldn't create a good entry point for long-term investors -- who are usually willing to tolerate a volatile quarter in any case -- but it's something to look out for if you are holding the stock.