US Silica, despite oil prices falling off a cliff last year, had a relatively good 2015 and is positioned to experience fantastic growth in the years ahead.

Despite the recent recovery in oil prices, drilling rig activity has fallen to the lowest level since 1949. Not surprisingly this has caused stock prices in oil dependent firms such as frack sand producers US Silica Holdings (NYSE: SLCA), Fairmount Santrol (NYSE: FMSA), Hi-Crush Partners, and Emerge Energy Services (NYSE: EMES), to get crushed over the past year. 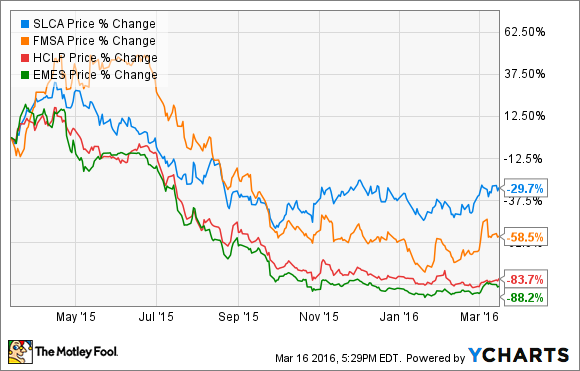 Yet US Silica, while down sharply, fared far better than its competitors. To understand why, let's examine US Silica's 2015 earnings results to see what makes this frack-sand giant is poised for potentially strong growth once crude finally recovers.

Rough 2015, but a silver lining exists

Luckily, its industrial sand volumes remained stable thanks to ongoing growth from the construction, auto, and glass industries. New higher margin products helped to lift the ISP segment's profitability to a record high. Better yet, US Silica recently announced that as of Feb. 1 it will be raising its ISP sand prices 4%-6% and expanding its production capacity in the face of ongoing strong industrial demand.

However, this silver lining wasn't enough to save the quarterly dividend, which was cut in half, from $0.125 to $0.0625 per share, as the company wisely focuses on preserving cash in the face of ongoing uncertainty about when energy prices will recover.

A strong balance sheet means the company is well positioned for future
Despite a weak 2015, long-term investors know that in cyclical industries such as energy, crashes such as this present great potential future growth opportunities.

US Silica has a far stronger balance sheet than its competitors. That's mainly due to two things. First, US Silica and Fairmount Santrol are structured as corporations instead of MLPs, as is the case with Hi-Crush Partners and Emerge Energy.

Though they aren't legally required to, MLPs usually payout the vast majority of cash flow to investors while funding growth capital needs with debt and equity which explains Hi-Crush's and Emerge Energy's more leveraged balance sheets.

However, Fairmount, despite its C-corp status, has by far the most debt of the big four frack-sand producers. This shows the danger of an overly aggressive management team that took out too much debt when oil prices were high to expand its capacity and transportation infrastructure too quickly.

US Silica, on the other hand, being over 116 years old, used a more conservative, long-term-focused growth that kept in mind that oil prices are inherently cyclical and very unpredictable. Thus, its management grew at a slower pace and made sure to retain a large quantity of cash for the kind of lean times we are experiencing now.

This has left US Silica with a distinct competitive advantage over its peers. The highly fragmented frack sand industry is currently in crisis, with big producers such as Hi-Crush and Emerge forced to renegotiate their debt agreements with creditors to stave off possible bankruptcy.

Meanwhile, US Silica, thanks to its stronger share price, just announced it's selling between 8 million and 9.2 million shares to raise as much as $190 million to fund "the potential acquisition of complementary businesses or assets."

After its stock sale, US Silica will have up to $489 million in cash available to go hunting for distressed competitors. With Hi-Crush and Emerge trading at respective market caps of just $203 million, and $126 million, it's even possible that the company might end up acquiring one of them, which would greatly increase its market share and dominance in the industry.

Risks to watch in 2016
While US Silica's balance sheet is the cleanest of the big four, be aware that Moody's just downgraded its credit rating from investment grade to "junk" with a negative outlook because of concerns with declining leverage ratios and continuing uncertainty about when demand for frack sand will recover.

This means that, until energy and frack sand prices rise, US Silica's borrowing costs will rise from their current 5.5% average, potentially making profitable growth more difficult.

Bottom Line
While investing in US Silica isn't without its risks, the company remains the strongest of the major frack-sand producers. While painful in the short-term, the recent dividend cut only further strengthens its ability to snap up competitors at fire sale prices. This would ensure larger market share for frack sand, whose greatly increasing importance in US oil production could make US Silica one of the best long-term oil and gas investments of the next decade.

Adam Galas has no position in any stocks mentioned. The Motley Fool recommends U.S. Silica Holdings. We Fools may not all hold the same opinions, but we all believe that considering a diverse range of insights makes us better investors. The Motley Fool has a disclosure policy.