Please ensure Javascript is enabled for purposes of website accessibility
Log In Help Join The Motley Fool
Free Article Join Over 1 Million Premium Members And Get More In-Depth Stock Guidance and Research
By Daniel B. Kline - Mar 24, 2016 at 11:30AM

It's a new way of doing business which could pay off big for the cable company and perhaps the online retailer.

Learning that Amazon (AMZN 3.15%) has decided to team up with Comcast (CMCSA 2.68%) feels a bit like discovering that Superman has made a decision to work with Darth Vader.

One party has a reputation for doing good (even if something occasionally gets destroyed along the way), while the other has built up an enormous amount of well-deserved ill will (even if it has professed a desire to change).

Still, despite their clearly very different ways of operating, Amazon and Comcast are working together. The question, of course, is whether the cable giant will bring the online retailer to its customer service level, or if Amazon can actually elevate its not-so-well-liked partner.

Of course, as we see with Vader's last-minute reversion to the light side of the Force, anything can happen. That makes it possible that Amazon deciding to create an online portal designed to sell cable television subscriptions could help Comcast in its quest to leave its own dark side behind.

A bit about reputations
Both Comcast and Amazon are rated by the American Consumer Satisfaction Index in their respective fields. In the case of Amazon.com, it tops the online retail category with an 83, scoring behind only the Wegman's supermarket chain (86), among all retailers. Comcast, on the other hand, scored a 54 in the pay-television category, placing it near the bottom.

The low scores for the cable company are a reflection of how it has treated customers, but it has pledged to change that. It's still in the early stages, but Comcast has pledged to hire 5,500 new customer service workers while revamping its entire approach to dealing with customers.

Amazon has always had a reputation for quality customer service and treating people well.

How are the two working together?
The online retailer has quietly launched the Amazon Cable Store, an online portal designed to make the process of signing up for cable easier. Other carriers may join soon, according to Geekwire, but at launch, Comcast was the only partner, and its XFINITY packages are heavily pushed.

Amazon has designed the store to remove the pain points in signing up for pay TV (as well as phone and broadband). For example, the online retailer promises it will help customers avoid leasing fees by showing them options to purchase their own modem if they add Internet service. The online retailer also offers dedicated customer service with a goal (but not a promise) to answer calls with 60 seconds.

Basically, this is Amazon inserting itself into Comcast's relationship with its customers. In many fields, that would be a bad thing. In this case, the online retailer adds credibility to its partner. 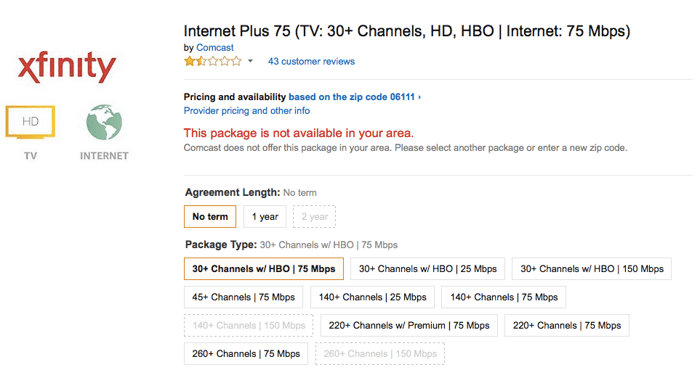 A number of packages are offered, but of course, you have to live within Comcast's service area. Image source: Amazon.

Is this is a good idea?
Assuming Amazon can ensure its reputation does not get ruined by Comcast being unable to deliver on its promises, this could be a good deal for both companies. The online retailer can leverage its huge user base as well as its positive reputation to encourage wary people to sign up with Comcast. In exchange, Amazon gets, you would have to assume, a piece of the subscription revenue as well as some cable modem sales.

The big winner in all of this could be Comcast, because it now has access to Amazon's customer base and its reputation. If it handles the relationship well, it could both add subscribers and continue to turn its own reputation around (all without having to die on the Death Star).