The old adage is to be greedy when others are fearful and fearful when others are greedy. That's pretty much the idea of buying low and selling high, but it puts an emotional spin on things. Emotion is what tends to drive investors and is the logic behind Benjamin Graham's "Mr. Market" analogy. If you have what it takes to take a contrarian look at things, you'll want to consider these six bargain stocks from the troubled oil patch, steel industry, and industrial space.

Oil bust
Oil prices peaked in the middle of 2014 and have since plummeted. But that doesn't mean you should run for the hills. Oil and natural gas are volatile commodities, so going up and down like this is, well, kind of par for the course.

Sure, you might want to avoid wildcatters, but there are a few names that have seen this type of thing before. For example, Chevron Corp. (CVX 1.00%), which traces its history back to 1879. Over the years it has developed into a diversified energy giant, with oil and gas drilling assets balanced by refining and chemicals businesses. So falling oil prices have hurt, but there's been an offset because that price drop increases margins in the other areas.

Chevron currently yields around 4.5% and management continues to back the dividend. That will require taking on debt this year, but Chevron's capital spending is also set to slow as big projects come on line -- which should increase revenues while it reduces spending. Assuming the oil market eventually stabilizes, investors who buy Chevron today will likely be collecting a handsome dividend on top of capital gains.

Now, if you're looking at Chevron, you should also take a peek at ExxonMobil (XOM 2.00%). The two have very similar business profiles. However, there's one key difference between the two: Exxon is probably the best-run oil company in the world. That helps explain why Exxon yields 3.6%, roughly 20% less than Chevron. 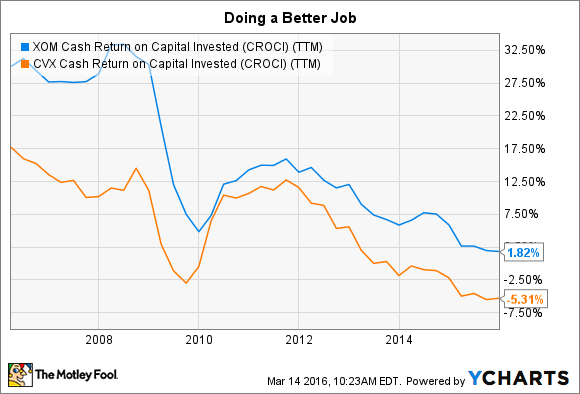 What does "best run" really mean? If you look at the returns Exxon has achieved on its invested capital, it has historically been a much better steward of investors' money than Chevron. So it's held up better than Chevron for a reason. But that doesn't mean it isn't a bargain today, just that it's less of a bargain than Chevron. For more conservative investors, however, paying up for quality might be the right call.

Both companies are trading with dividend yields that haven't been seen since basically the mid-1990s. And their price to tangible book value's are near multi-decade lows, too. So now really could be a good time to step aboard.

More commodity pain
Oil and natural gas, though, aren't the only commodities that have seen a downdraft. Another big loser of late has been steel. On that front, one of the best run companies in the United States is Nucor Corporation (NUE 1.11%). To give you an example of just how well run Nucor is, despite the lengthy industry downturn, Nucor has lost money only once over the last decade. Competitor AK Steel has bled red ink for seven consecutive years.

How does Nucor do it? For starters, Nucor's business is heavily tilted toward less-expensive electric arc furnaces. That gives it an edge over companies like AK Steel, which rely on blast furnaces. However, Nucor also has extremely good relations with its employees, with contracts that reward employees during good years but that ask them to share in the pain of bad years. This helps lower costs for Nucor at the exact moment it needs to trim expenses.

But Nucor isn't the only steel company you should be thinking about. For example, Steel Dynamics (NASDAQ: STLD) also uses electric arc technology and has managed to remain profitable for eight of the last 10 years. It lost money in 2009 and again last year. That's not a great sign, but it's far better than peers like AK Steel and even U.S. Steel, which has posted red ink in six of the past 10 years.

Nucor yields around 3.3% and Steel Dynamics about 2.6%, if you are into income. On that score, however, it's Nucor that really stands out. Nucor has increased its annual dividend right through the downturn, albeit at a modest clip, and now has an annual dividend increase streak of more than 40 years.

That said, Steel Dynamics and Nucor both sport yields that are high relative to their past, though Steel Dynamics hasn't been paying a dividend for nearly as long as Nucor. Their price to tangible book value ratios, however, are low but not historically low. So now is a good time to look at them, but probably more so for those interested in income.

Industrial pain
The next two bargains hail from the industrial sector. This area basically sells products and services to other businesses and it's been hurting. For example, Eaton Corporation (NYSE: ETN), one of the two bargain stocks to look at right now, saw its organic growth fall 2% last year. It's projecting organic growth to slow as much as 4% this year.

But industrials tend to be cyclical businesses, too. And Eaton Corp, which traces its history back over 100 years, has seen a cycle or two. That helps explain why the industrial giant, focused around power management, has been cutting costs and working to enhance cash flow. To give you an idea of how well it's done, it turned nearly 95% of its net income into free cash flow last year. Oh, and even in a bad market it was able to increase earnings by 12% in 2015. It expects earnings to be up again this year, too, despite the industry headwinds.

Emerson Electric (NYSE: EMR) is another industrial name you might want to look at. Emerson is also dealing with the industrial downturn by controlling the things it can, allowing it to earn more in fiscal 2015 than it did in fiscal 2014. Eaton got top billing here because Emerson is in the middle of trying to split off its network power business, which it only recently started to build up. That's an issue that's bigger than a breadbox and will require bargain hunters to pay pretty close attention to what's going on at the corporate office.

Eaton yields nearly 3.8% and Emerson about 3.7%, so both should be interesting to dividend seekers. Note that Emerson has raised its dividend annually for around 60 years, which is why it got onto this list. Eaton's dividend has been moving generally higher over time, but it opted to hold the rate steady for a year during the 2007 to 2009 recession.

The yield on Eaton and Emerson shares haven't spiked like this since the 2007 to 2009 recession. And before that the last spike to these levels was in the early 1990s. Although its possible that this time around, this well-diversified pair of industrial giants will wither away, history suggests that this is a buying opportunity and not the end of the world. 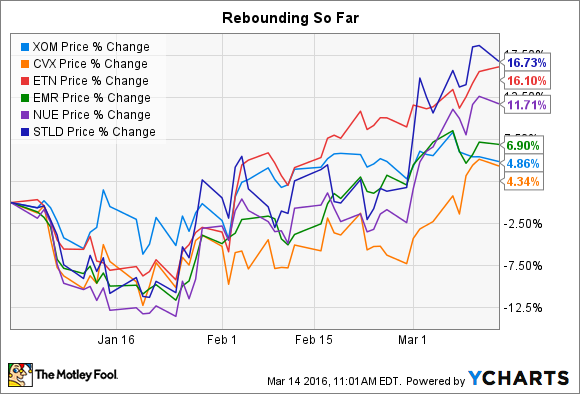 Things change fast
Chevron, Exxon, Nucor, Steel Dynamics, Eaton, and Emerson all look like bargain stocks for you to buy today. But they won't be forever. In fact, all six are up so far this year -- in stark contrast to 2015. In other words, you might be running out of time to be greedy here. So if you're interested in this sextet, you'd better take a deep dive before these bargain prices go away.